Advanced slow-motion cameras from Digital Video Sud (DVS), part of Euro Media Group, were used by France Télévisions at the French Open, enabling the action to be captured at up to 1000 frames per second (fps). 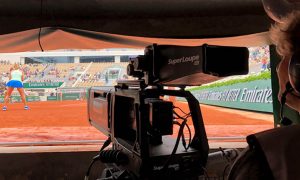 Superloupe filmed at Roland Garros at 1000fps for the men’s games and 800fps for the women, going down to as low as 200fps in low light nighttime conditions

Founded by Aram Novoyan in 1997, DVS has been a specialist in slow motion for 21 years. It developed and patented Superloupe, the first ultra slow-motion camera for live broadcast, in 2004 and now the technology is on its third iteration, the Superloupe 4K.

Superloupe 4K can go up to 2000fps for HD footage, or is used at 1000fps for 4K content. Commented Margon: “At Roland Garros, there are two directors on the Chatrier court [for France Télévisions], Fred Godard and also Christophe Baudouin. The slow motion script at Roland Garros is special with replays at very high speed (1000fps). But it also reveals the great dramatic, emotional and athletic intensity of the great tennis champions. 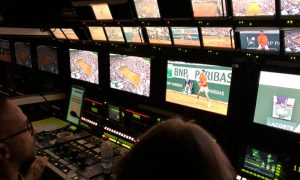 The speed of the camera can be changed as required. “This is why it’s really awesome,” commented Margon. “For tennis, at 12pm the light is very different to 7pm, so we can slow down the frame rate to increase sensitivity and maintain the picture quality because the cameras are switched into the live feed like any other camera around the pitch. As Superloupe can be used in two ways, this avoids the need to get one standard camera for live coverage and another for the ultra slow motion, so the production can save money. It is also advantageous for the event manager when the space around the pitch is difficult to find.”

Added Aram Novoyan, inventor of the Superloupe and general manager at DVS: “At the end of the game on 3 June between Khachanov and Del Potro, the night was falling very fast at around 9.45pm but we could maintain high quality pictures by dropping down the frame rate minute by minute, frame by frame, from 1000fps to 200fps. Other ultra motion cameras can’t adapt as easily as the Superloupe in these kind of light conditions because they have less choice of frame rate and need a full reboot, whereas the Superloupe makes the changes instantly.”

The Superloupe 4K has a 35mm CMOS sensor – a large sensor usually seen in cinematic production rather than sport — and it uses a multimatrix of 24 points, significantly above the standard used by other ultra motion cameras which uses 16 points – which creates a picture quality of finesse with faithful colours.

Margon noted: “That’s why the pictures are so spectacular; the sensitivity of the sensor and the quality of it is really good.” 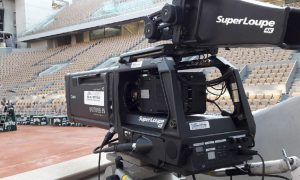 Superloupe was created following to the 2002 Formula 1 Grand Prix in Monaco produced by ACM, where the F1 director at the time Georges Giofray asked Novoyan why it was not possible to improve the camera quality – which at that time could only provide 75fps – in order to show the incidents occurring on the track. Novoyan immediately got to work, first contacting manufacturers including Thompson and Sony to ask them to build a new camera that could do more than 75fps. However, they all told him it was not possible at that time. So, defying apparent limitations, he built his own camera, Superloupe, which then worked at 500fps.

Superloupe was first used in live conditions at the 2004 Formula 1 Grand Prix in Magny-cours. It went to Roland Garros for the French Open for the first time in 2005, and in 2006 was used at the FIFA World Cup in Germany and Wimbledon, London, for the tennis. At the 2006 Winter Olympic Games in Turin, Superloupe also caught the famous trip and recovery of American alpine ski racer Bode Miller, giving fans a never-seen-before experience.

From that first use at Roland Garros with one Superloupe in action, from 2013 onwards the directors have requested and used three Superloupe cameras.

DVS is in the process of beginning to grant distribution licenses for Superloupe, outside of countries where it already has hiring facilities and partnerships.