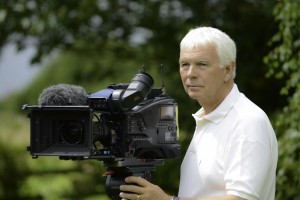 Keith Massey, Chair of The Guild of Television Camermen

The Guild of Television Cameramen has elected Keith Massey as Chair. Recipient of a prestigious Royal Television Society Lifetime Achievement Award in 2010, he is a highly experienced and well-respected cameraman based in Yorkshire. He has accepted the post for a two-year tenure, succeeding Graeme McAlpine who has led the GTC during an active period of expansion. Keith was elected at a meeting of the GTC Council in Pinewood Studios on Sunday 1 July, at which two Co-Vice Chairs, Dudley Darby and James Fulcher, were also appointed.
Keith’s career as a director of photography and lighting cameraman dates back to the 1960s.
“I started with a hand-wound clockwork 16 mm silent-film camera,” he recalls. “My first television piece was of Kelabit natives in Borneo, used on ‘What The Papers Say’ by Granada TV in Manchester. I later contributed regularly to the BBC in Manchester for its nightly regional programme ‘Look North’. Offered a staff job on the ‘Daily Mail’ as a photographer or a two-days-per-week contract with the BBC, I chose television.” Since 1970 he has worked on a freelance basis in news, documentary and drama, receiving RTS awards in all these fields. He still works occasionally with BBC News correspondents from London or the Northern Bureau, and also now shoots in high definition video for other programmes.

“I fully appreciate the pressures professional cameramen are going through,” he adds. “I feel very honoured to be taking over the Chair of the Guild of Television Cameramen during its 40th anniversary. My aim is to encourage excellence in all fields. Mediocrity is not an option for people who are operating as the eyes and ears of large television audiences. I would like to see the GTC being more assertive in protecting quality. I will endeavour to bring strong positive leadership to the GTC along with my colleagues on Council.”

The Guild of Television Cameramen is an independent non-profit-making international organisation that cares about television camerawork and the people who make it their craft. The GTC has over 1,000 members, in the UK, Europe, Australia, Russia, Singapore, South Africa and the USA. The majority work in aspects of television ranging from production through documentary and drama, news and current affairs, sports and light entertainment, to corporate video.”

Run by a council of volunteer television professionals, the GTC is financed by subscription from its members as well as sponsorship from equipment manufacturers and suppliers. As a result, the GTC offers a channel for manufacturers to consult with working cameramen when designing new equipment. GTC membership is open to anyone employed in single or multi-camera television operations or in any associated occupation.