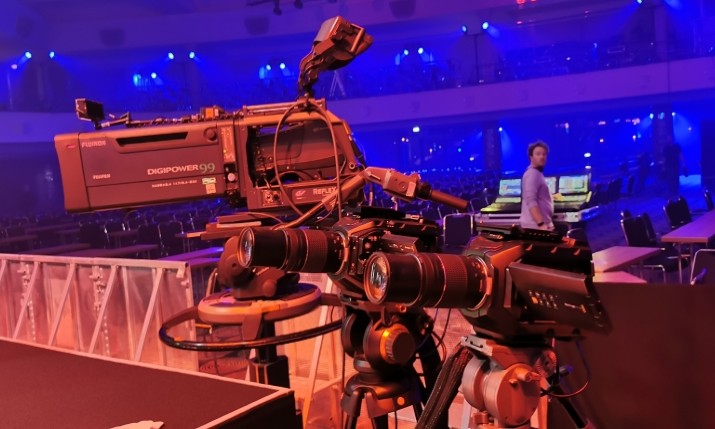 The competition begins with the Belgian Darts Open, Hasselt from 28 February to 1 March. All 13 European Tour Events are three days long, with Keystone Productions, now in its sixth year working with the PDC, providing all eight to nine hours of footage live per day.

Platforms that have previously and will this year take a live stream of Keytown Productions’ content include over 30 of the world’s biggest bookmaker sites. What was once seen as a working-class pub sport by many, darts now finds itself on a par with the likes of boxing or MMA, said van Loon: “The PDC has played a big role in that, with competitions now drawing in thousands of fans, and with hundreds of thousands more tuning in on television.

“We work across the PDC’s European tour, helping to produce content that is streamed live by a host of platforms. We also co-produce televised formats such as the Promi-Darts World Championships in Germany, which is now in its fourth year,” he explained. This event is shown as a five-hour live show on Germany’s ProSieben TV Channel.

As the PDC’s requirements and needs for content have evolved, so too has the production workflow that Keytown employs. van Loon said: “We now rely on a compact flyaway PPU solution built around Blackmagic Design. Whilst needs can vary from one production to the next, the one constant is our requirement to cover the entire darts board. You have to ensure that viewers can always see where each darts lands.”

On the challenges of producing darts content for TV, van Loon noted: “You’re never sure where the dart player will throw the next dart. So we need a couple of angles and very quick response from the crew.”

He continued: “Aside from the various title graphics and playout devices such as a HyperDeck Mini, we also have about 14 incoming video sources. Some of these come from a Datavideo KMU100, which allows us to split two 2160p50 signals into eight 1080i50 sources. To control the KMU100 we use our own developed software programme called PresetMaster; this is operated by the darts spotter and works faster than any other system in the world

“Two URSA cameras provide that fixed, full board shot of the dartboard in 4K quality, which we then divide into various closeup shots using the KMU. These are then sent back to the gallery as independent feeds that our vision mixer can then use in the PGM mix.”

Previously, explained van Loon, “we’ve always had a flyaway set for maximum flexibility”. He went on: “We’ve used Atem 2 M/E’s and videohubs before, but with the Constellation we have a few more advantages.”

A typical production can mean that the team is dealing with multiple sources. Van Loon noted: “Previously, we didn’t have enough I/O on our 2 M/E switcher, which meant we had to use a pair of 40×40 routers to act as patch panels to handle the various sources and outgoing streams. However, we needed to go bigger, and with less.”

To do that the team recently upgraded its switching capabilities with an Atem Constellation 8K. “As a solution, it’s so much more flexible thanks to the increased I/O,” said van Loon. “Especially the four multiviewers, all of which are configurable and give us a lot of flexibility. The Constellation also features 24 outputs that act as if they are separate aux buses.”

He continued: “We then have our main programme output for the live broadcast, and depending on the job; we can also be providing various feeds to big screens and monitors around the particular venue. We record the shows on a series of HyperDecks, but also as different isolated recordings for editing.”

According to van Loon, one of the most essential shots in darts is the so-called ‘split-shot’, where a part of the dartboard is featured on the left of the screen, the player on the right, along with any graphics on top. “We only had a single SuperSource previously, but the Constellation has two. That means we can alternate the inputs on the split-shot with ease.”

Belgium is back on the map of the European Tour for the first time since 2017. The European Tour 2020 includes thirteen events in Germany, Austria, the Netherlands, Belgium, Hungary, the Czech Republic and Gibraltar.

Altogether, 48 players will take part in the European Tour event. The top 16 of the Pro Tour rankings are seeded and will enter the tournament in the second round. The remaining 32 places will be played in various qualification tournaments. The 32 qualifiers determine the opponents of the top 16 in the first round. The draw for a European Tour Event always takes place one day before the event.