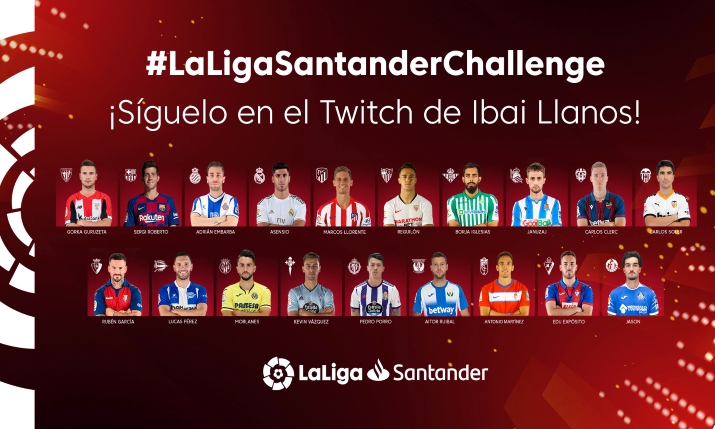 LaLiga has announced that 19 top-flight players in the league have accepted a challenge, devised by Spanish video game influencer Ibai Llanos, to battle it out this weekend in a charity FIFA 20 tournament that will be streamed globally.

LaLiga and Santander bank have joined the #LaLigaSantanderChallenge, designed by Llanos, who invited the LaLiga Santander clubs to take part in an online tournament to be contested on FIFA 20, the video game published by EA Sports. The campaign’s goal is to raise awareness about the need for people to stay at home to halt the spread of coronavirus.

Llanos, a sports commentator who specialises in online competitions, is the brains behind a challenge that saw him suggest that a player from each of the 20 top tier outfits represent their team in the online event. This competition will allow followers of the best football on the planet to continue to enjoy the competition in a virtual form.

Llanos launched the challenge via his Twitter account on 16 March and the league’s players were quick to sign up for the initiative. The influencer’s idea was for all of the games to be available for fans to watch for free via his channel on Twitch, a video live streaming service that is mostly used to stream video games. Supporters from all corners of the globe who are keen to catch the action will be able to do so on Llanos’s Twitch account.

Now the #LaLigaSantanderChallenge will be covered across all of LaLiga’s channels: the official @LaLiga Facebook and Twitter accounts, just like on any other LaLiga Santander matchday; on the @esportsLaLiga Twitter account and at @eLaLiga on Instagram, YouTube and Twitch; via LaLigaSportsTV; Movistar+ will also broadcast the tournament on MOVISTAR DEPORTES 1, Channel 54 (available in Spain only); and the Movistar #Vamos news bulletins will offer live link-ups to the #LaLigaSantanderChallenge.

Taking their places alongside Llanos will be renowned Spanish football commentators Miguel Angel Roman, Manolo Lama and Ruben Martin, who have backed the challenge and will commentate on the #LaLigaSantanderChallenge matches live from their homes as we take our football, albeit in a different form, to households across the world.

LaLiga’s official video gaming competition, eLaLiga Santander, is supporting Llanos in the organisation of the tournament, the setting up of the games, the distribution of the stream and the creation of graphics during the streaming.

Meanwhile, eLaLiga Santander’s official provider, LVP, will be in charge of the technical production during the event and will ensure that followers are offered an optimum viewing experience, with the company set to be responsible for the production and distribution of the signal to the various streaming channels, among a number of other tasks.

The tournament, set to be contested by 19 LaLiga Santander players, features a series of ties that will be decided in best-of-one games played over 18 minutes (comprised of two nine minute halves). The competition got up and running on Thursday evening 19 March at 20:00 (CET) with the staging of the draw.

The first matches get under way today, Friday 20 March, from 19:00, while Saturday’s action begins at 18:00. The curtain will come down on proceedings after Sunday’s games, which kick off at 18:30.