LaLiga President Javier Tebas took to the stage at Sportel Miami last week to discuss the increasing role data and technology plays at the league and why it is important that leagues who own the rights continue to help those who buy the rights.

“Our main objective is to serve our broadcasters as that is the greatest value we can provide,” he said. “Most of our clubs get their income from audio visual rights and we need that to be our main interest. We want happy broadcasters who get a return on their investment.”

He challenged all sports leagues to move beyond a culture of selling rights and then forgetting about them until the next tender. 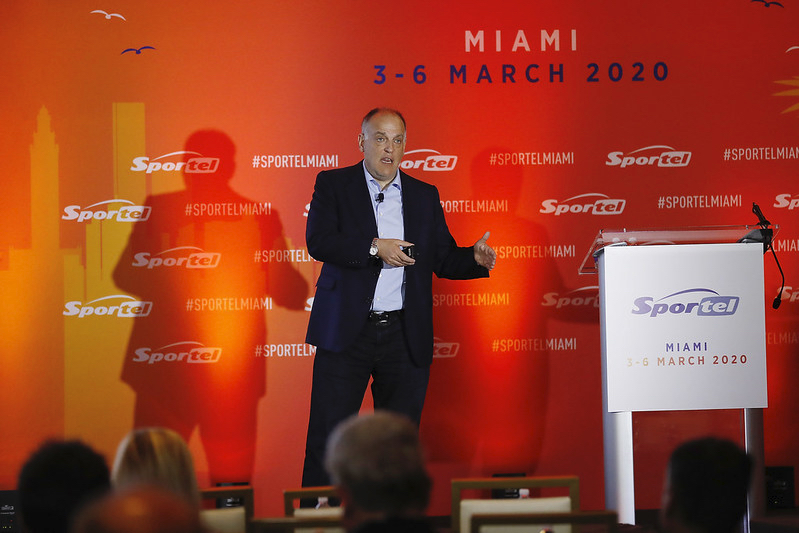 LaLiga’s efforts are multi-platform and 24/7. The league has an OTT platform in Spain that has 725,000 registered users and shows events like futsal and boxing (there is no first- or second-division football). There are 250,000 active users each month consuming about 17 million live minutes of content over 1,145 events in 2018 and 2019. Tebas said it continues to be fine-tuned so that it is not intrusive with fans and sends them content alerts that are based on their interests.

“We need to be there with broadcasters because it also helps the clubs increase their value,” he added. “At LaLiga we now have a digital ecosystem where the top main asset is data. If you don’t have data and recognise its importance than it is like having a lot of land and not using it to produce anything. You have to work to give it value and the digital channels we are using are like a river where every day there are thousands of pieces of data coming in.”

In 2013 LaLiga hired a CTO and since then its technology department has grown to 48 employees (and overall staffing from 57 to 614). Tebas said that technology cuts across everything within the organisation.

“Everyone pays attention to what the CTO does,” he said. “Having someone who understands the world of data, business intelligence and algorithms is as important as anyone else.”

An example of putting data to use, said Tabes, is a calendar selector for scheduling matches. La Liga schedules matches 30 days ahead of time and the system utilises AI to see how many people attended a given match over the previous five years, the size of the TV audience in Spain and beyond, and then weigh that data together to find the optimum time to schedule a match.

“It really improved the organisation,” he explained.

While Microsoft works on projects like AI and data management LaLiga makes use of Salesforce to collect personal data from fans who engage digitally or attend a match. It provides one platform that brings it together from various apps, ticketing, social media, and more. How are fans engaging with LaLiga and for how long? What kind of content works and doesn’t work? Saleforce also plays a big part in emails that are sent to fans, ensuring that an email promoting a team isn’t sent to rival fans.

“We give our clubs specific data so they can use it as they see fit,” he said.

The driver for all of the efforts, added Tebas, is for La Liga to be able to compete not only with sports but also Netflix and other entertainment content and events.

“There are only 24 hours in the day and if we are not prepared our future will not be very promising,” he said. “Netflix and others target your interests and we have to do the same thing as we are entertainment.”

He closed by saying sports leagues, teams and channels need to become more like Facebook or Amazon when it comes to understanding the sports fan.

“They know more about our viewers and fans than we do,” he said.