Lavinia rises to challenge of multiple locations for Mediterranean Games

The 18th Mediterranean Games, a multi-sport event held every four years, brings together national teams from across Southern Europe, North Africa and the Middle East.

Held in a different country each year, the ten-day event includes 33 competitions covering everything from sailing to football and Taekwondo. 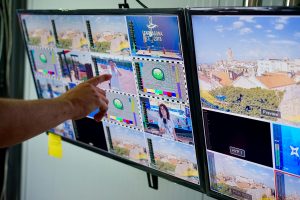 The 2018 event, held June 22 to July 1, saw 4,000 athletes from 26 different countries, 1,000 judges and representatives of the games’ federations and committees, 1,000 journalists from all over the world, and more than 150,000 spectators gathered in Tarragona, a port city located in northeast Spain.

Covered by broadcasters around the world, the Mediterranean Games are one of the highlights of the sporting calendar.

This year host nation Spain decided to spread the games venues across 16 different municipalities around the country. This, in turn, raised many logistical challenges for broadcasters and production companies. The geographically disparate venues meant that having multiple OB set-ups was logistically challenging as well as hugely costly.

Lavinia was contracted to deliver the feeds from the various stadiums to another of the Spanish broadcasters, which had its own OB production set-up in Tarragona. Lavinia, which was already a customer, turned to TVU Networks for a solution.

As it was already familiar with the TVU One live solution, Lavinia chose the mobile IP HD video transmitter to enable the delivery of live feeds from multiple competition events. The units were used to handle live video signals as well as to support recording and playback.

Joan Masip, CTO at Lavinia explains: “We were already familiar with the TVU One solution, so we knew that it was right for our needs and would enable us to easily meet the challenge of managing feeds from different locations. Not only does the TVU One deliver a stable, high-bandwidth connection, but its intuitive interface makes it easy to use.”

Lavinia used ten TVU One packs, each equipped with six SIMS and five dual channel receivers. Seven of these packs were deployed in the field and were used all day long to capture live news from the different stadiums.

The remaining three packs were located in the main OB-van, where they were connected to a macro LAN and used to send the final program back to the TV stations. Each broadcaster had a dedicated pack, and one deployed as a backup. This eliminated any potential issues resulting from unpredictable connections between locations.

The TVU One IP-based, portable transmitter is available with HEVC video compression and TVU’s Inverse Statmux Plus (IS+) transmission algorithm to transmit full HD quality video with half-second latency at 3Mbps. It’s available with embedded modems and can transmit simultaneously over multiple connections, including cellular, microwave, satellite, BGAN, WiFi and Ethernet.

Lavinia was able to deliver all the content from the ten-day event without a hitch. Although 3G/4G/LTE connections would have worked just as well, the macro LAN set up gave the broadcasters added peace of mind during this challenging event format.

The final programme was streamed live on the TV stations’ respective websites and the content was also used as part of a package on the daily news each evening.