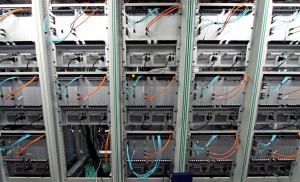 In what is believed to be the largest digital audio network currently being used by any broadcaster, IMG’s recently-opened Stockley Park facility – which will host SVG Europe’s first Tour & Conference on 10 October – has been equipped with a Lawo Nova73 router using net links to serve no fewer than 15 mc²56 digital mixing consoles.

All studios, production galleries and client service areas are conveniently situated within close proximity of each other on the ground floor of the new building. Taking just nine months to build, equip and commission, the facility includes four HD broadcast TV studios ranging from 1000 sqft to 2,000 sqft. Lawo’s involvement began with a meeting at the London BVE Show in 2013, with the initial system order being placed in December 2013. With just six weeks allocated for the installation, the system was first assembled at the premises of system integrator TSL, where it was tested and fine-tuned ahead of delivery.

With the Nova73 at its core, the system originally included 12 consoles – a combination of 48-input mc²56 MkII consoles for larger productions, such as coverage of Premier League football for Sky, and 32- and 16-fader consoles for less demanding operations including radio and web streaming. In addition to the central router, each of the consoles has its own Nova73, allowing all of the facility’s resources to be shared by all of its mixing consoles.

“The system had to be fully networked and very flexible because of the wide range of TV clients. All the consoles, servers and EVS system had to be connected, as well as studio stageboxes and break-out boxes,” says Tobias Kronenwett, Lawo’s international sales & project manager. “The router network has about three-and-a-half thousand inputs and outputs.”

The flexibility of the new facility enables it to serve almost every production genre in both broadcast and corporate markets. The studios are built around a completely digital MCR with full connectivity to all IMG Studios operations, and more than 200 HD links to companies such as Arquiva, Globecast, EBU and BT. The post-production facilities include 72 edit destinations integrating tapeless workflows from acquisition through to delivery for transmission and archive.

The initial installation covered three main studios equipped with 48-fader mc²56 MkII consoles, eight live galleries with 16-fader mc²56 consoles, Live Gallery A with a 32-fader console, Radio Studio 1 with a 32-fader console, and Radio Studio 2 with a 16-fader console. But before completion of the installation, the order for 14 consoles had increased to 15 – and the indications are that still further expansion of the system is to follow.

“The network of 14 audio consoles at IMG is at an unprecedented scale within the UK,” says Tim De Marco, head of technology – Live Galleries & Studios at IMG. “The configuration and ongoing support from Lawo has helped make our move to Stockley Park much easier – we are very proud of what we have achieved.”