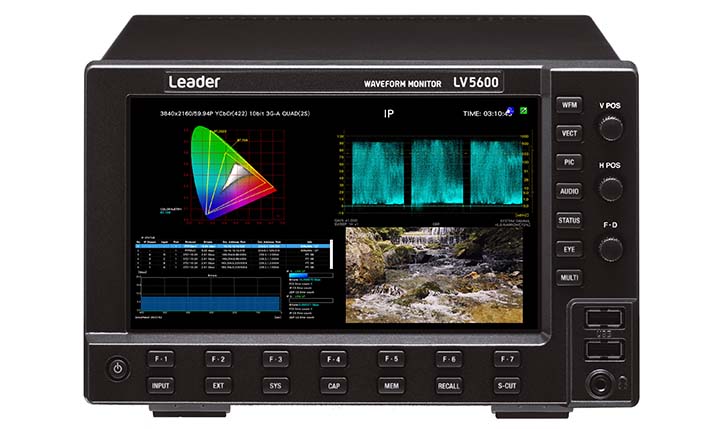 The Leader product range includes award-winning Zen Series SDI/IP waveform monitors and rasterisers, all with customisable layouts. The company has helped many customers manage their transition from analogue to digital, from SD to HD, from HD to 4K/UHD, from SDR to HDR and from BT.709 to BT.2020 wide colour gamut. Leader also provides SMPTE ST2022-7 and ST2110 support for the transition from SDI to IP.

Phabrix’s recently announced QxP inherits the toolset and flexible architecture of the QxL rasteriser but in a 3U form factor with an integral high-contrast 1920×1200 7in multitouch LCD screen. The QxP’s feature-set is headlined by its capacity for 25GbE UHD IP workflows. The instrument is suitable for portable operation thanks to an optional V-mount or G-Mount battery plate.

The QcP is suitable for workflows involving HD, UHD, SDR, HDR, SDI and IP, as well as conventional and remote productions. The QxP comes with extensive IP support including ST2110 and 2022-6, along with compatibility with a wide range of 444 and 422, YUV and RGB video formats. For real-time IP production, the unit provides support for generation and analysis of HD/3G/UHD/EUHD 2110 payloads on generic SFP28/25GbE interfaces. SDI users are also catered for with an SDI option for hybrid SDI/IP applications and a fully-featured SDI toolset with audio, Dolby-detect and DATA view included as standard.

On the decision to renew its Gold sponsorship of SVG Europe, Salvidge said: “SVG Europe continues to be a popular source of news for the broadcast community. Its seminars also provide a useful forum for networking with key members of the broadcast industry including vendors, production companies, post facilities, content owners and system integrators.”