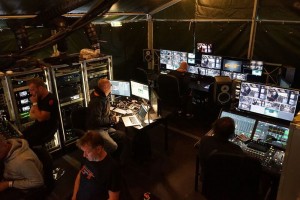 “The flypack was developed over the course of three months and needed to meet strict requirements,” explained Bolke Burnaby Lautier, United’s manager of special projects. “At most locations, the equipment has to be flown in so we had to pay close attention to equipment size and weight. The entire production system fits into 13 pallets with a combined weight of 4,700 kilos. It includes everything we need: cameras, dollies, monitors, audio desks, audio amplification, cabling, tables and even a tea set: very important for our UK customer. To develop a flyaway like this demands significant expertise.

“To be on a mountain in South Africa and find you’re missing a cable is unthinkable. The newly developed Grand Tour takes just four hours to set up and two hours to get flight-ready again. In between, it works like a charm.

“The new flyaway consists of a camera and a recording system plus a comprehensive audio setup. The cameras yield wide-colour-space 4K UHD files including proxies which can be edited immediately. We chose a Leader LV5490 as it enables our technical crew to check the colorimetry and gamut of the various cameras.

“The integral CINELITE feature also allows the camera crew to ensure maximum signal quality when shooting live rather than relying on signal renormalisation during post production. Getting it right from the start is by far the best way to achieve the full quality which wide-colour-space 4K UHD is capable of delivering,” said Burnaby Lautier.

“This is the kind of project at which the LV5490 excels,” added Leader Electronics’ European business development manager Kevin Salvidge. “It incorporates all the facilities required for no-compromise 4K high-dynamic-range signal measurement in a compact footprint which is equally suited to studio or outside broadcast operation. That includes the LV5490SER07 HDR option which enables this instrument to measure both 4K and high-definition high-dynamic-range in ITU.BT.2100 Hybrid Log Gamma, Dolby PQ and Sony SLOG-3 protocols.”