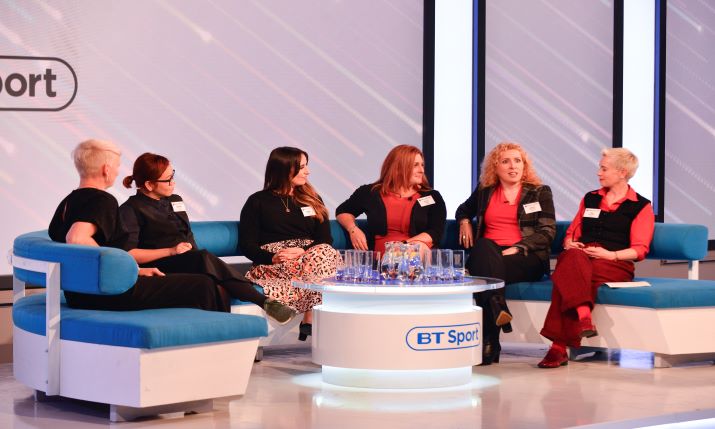 Television can be a revelation, and for Roisin McKeniry, head of production technology at Timeline Television for BT Sport, it opened up the door to broadcasting when one day she realised there was another world behind the presenters.

She first found out about careers in TV as a teenager. She says: “I watched a documentary about Ireland hosting the Eurovision and they turned a show jumping stadium into what was to become a stunning studio. It gave the world Riverdance, and me an insight into behind the scenes of technical production.”

Today, McKeniry is at the heart of BT Sport’s move during the coronavirus pandemic to becoming a distributed remote production. She is working closely with the broadcaster to ensure the technology is there to enable all its staff to run the network from their homes across the UK.

Learning on the job

Technical production was always the goal that McKeniry was destined for, yet she has not studied engineering formally. She learned to be an engineer on the job. McKeniry did a degree in communications at DCU in Dublin, Ireland. She notes: “At the time it was one of only two courses available in the country to do anything technical in TV. As part of that degree we made programmes and all took the various roles required.”

She goes on: “I loved working with cameras and editing equipment so when I left my plan was to become a TV editor. When I did become an actual editor I realised two things, the first being I wasn’t very good at it. The second was that I was more interested in how things work, so I asked lots of questions and got myself to a stage where I understood, and could resolve most of the technical issues I encountered.”

“Modern engineering is all about problem solving, coming up with creative solutions with new and old innovations”

Her first industry-related job was in a warehouse, despatching and rewinding 16mm films. She was able to add trailers to 35mm film for cinemas, then VHS duplication, and also QC’ing TX masters of Beta tapes. “I learned so much about video signals and audio line ups and more, just from the QC experience,” she says.

McKeniry’s next job at ISL started with a role as VT operator, “when such things existed,” she comments. She says: “My boss was a real inspiration. I wanted to learn and he pushed me as fast as I wanted to go. I worked with incredible editors who were always willing to let me sit in the edit suites and teach me new things. In return, I made tea and stayed late to help anytime.”

When she moved on to manage a technical team at The Sanctuary Post House, again she had another inspirational boss, “who quite enjoyed having someone getting as excited as they were about new technologies”, she says. “It was the start of HD production, so there were a lot of new challenges to be embraced. I have never been afraid to ask questions or admit that I don’t understand something, and with that built relationships with manufacturers and vendors,” she states.

Roisin McKeniry said: ““It is a well-documented, unfortunate fact that not as many girls as boys do A level maths, and of those that do, very few see technical engineering as a career path available to them. If then the university courses demand those entry level requirements, we are cutting off a whole section of society. Not just women, but people from diverse backgrounds.”

As to why it is important that women understand you can learn engineering on the job, rather than having to get A Level maths and go to university, McKeniry comments: “It is a well-documented, unfortunate fact that not as many girls as boys do A level maths, and of those that do, very few see technical engineering as a career path available to them. If then the university courses demand those entry level requirements, we are cutting off a whole section of society. Not just women, but people from diverse backgrounds.

“Modern engineering is all about problem solving, coming up with creative solutions with new and old innovations. As an industry we need people with different life experiences, to bring new perspectives on the challenges we are faced with,” she says.

There are many benefits to learning engineering, technical skills on the job, as opposed to going to university, McKeniry states. “University is great, I had a great time and learned a great deal and we have a graduate programme [at Timeline TV] that has given us so many talented young people.

“But technology is changing all the time, young people are learning coding and how to create apps at school age. We can build on that, we can use those skills and the wider range of diversity it brings us at this very moment,” she continues. “There was a time that it was normal for people to start straight from school, either as a runner or as an apprentice.”

After a career that took her from UK TV and film production company, Tiger Aspect Productions, as an engineer, to visual effects and animation studio, Prime Focus, where she held the role of head of UK broadcast operations, McKeniry started working at BSkyB in 2012 as a senior broadcast production support engineer with a focus on post production technology.

On that experience, she comments: “It was a dynamic environment with so many opportunities to learn. I was very fortunate to again have access to so much cutting edge technology and the time to learn it in-depth. One of the reasons they employed me was that I could talk to the creative teams, I understood what they were trying to achieve, and then could work with them on finding the right solution. New toys are great, but people have to be able to use them,” she adds.

“No one loves showing off all of their technical knowledge more than engineers, do not be afraid to ask questions”

She moved to Timeline TV in March 2016 as media systems manager, and in September 2019 became head of production technology. On how she first moved to Timeline TV, McKeniry says: “As with 90% of the jobs I have had, I knew a man who knew a man who needed someone to take on the job of heading up the post production technical teams at BT Sport. I was excited by the opportunity, applied for the job and the rest, as they say.”

With BT Sport evolving quickly, McKeniry’s career and experience was also able to move fast. She explains: “Very quickly it was clear that BT Sport was growing so much in not only its output, but also its ambitions, so I was getting more involved in some great overall projects. Again another amazing boss Malcolm Cowan – I have been lucky or I am very good at training them! – allowed me to take on as much as I wanted, and learn and help deliver new technologies and workflows.

“When he left I took on the responsibility for all of the production technology, backed up with an amazing team of engineers,” she adds.

Her current role involves, “listening and translating, mainly”. McKeniry says: “The production and BT Sport technology teams are very dynamic and we try and respond as quickly and efficiently to all of their ambitious demands. My job as I see it is to make sure that my teams can concentrate on providing that level of response. We also have to continually reassess everything we do and make sure it is the best for our client.

“The most important and I would argue the most enjoyable part of my job is watching people grow, both in knowledge and in confidence. No matter how amazing the next bit of techy kit is, it is people who make it work.” 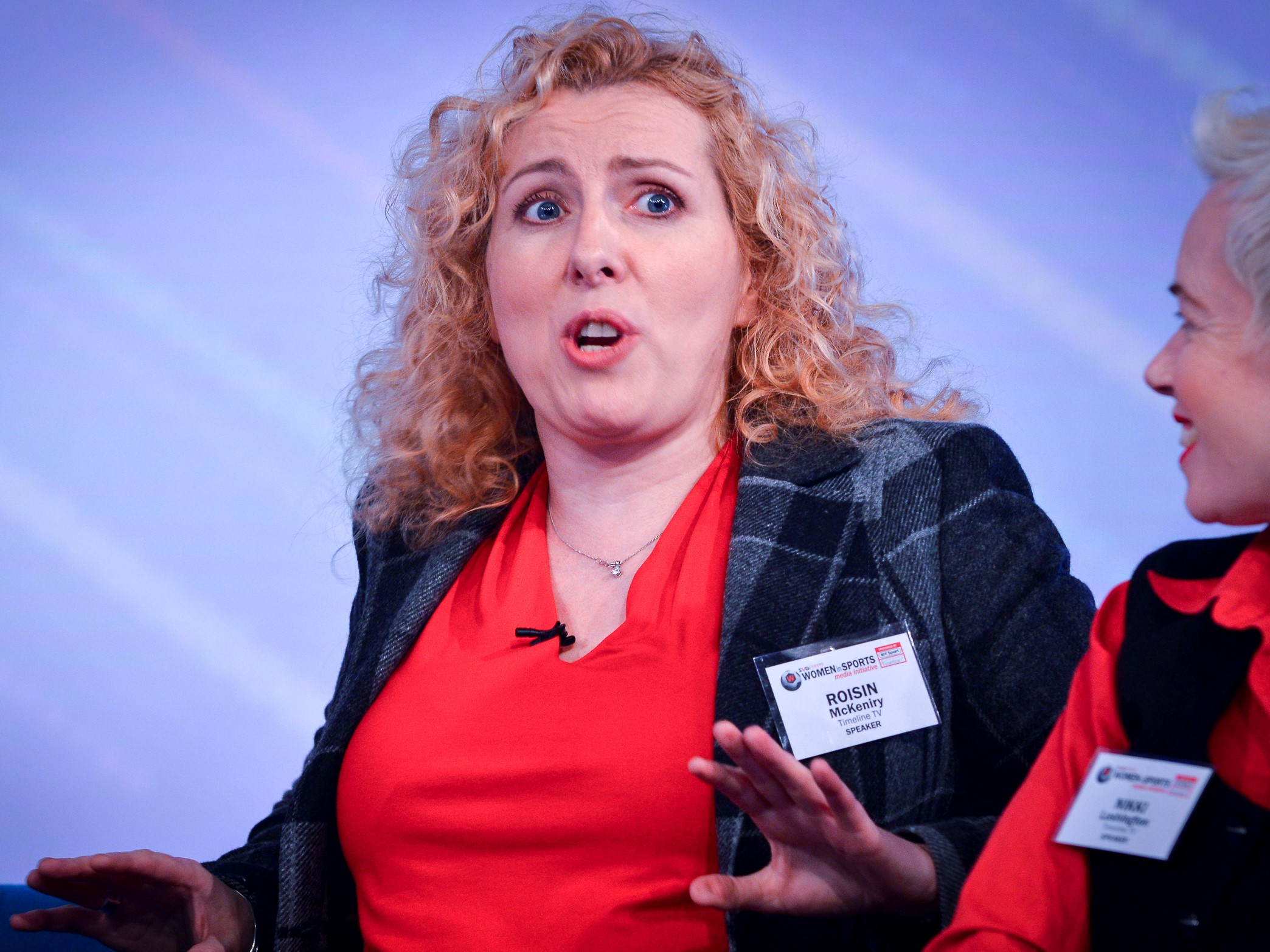 On the move to get all BT Sport’s staff working efficiently from home, McKeniry says: “At the moment we are absolutely getting everyone possible offsite. Obviously we are doing it now because of a health crisis, but thankfully it completely feeds into a long term strategy to promote more remote working, for both environmental and increasing diversity reasons.

“There have been the obvious challenges around understanding what can be achieved, but we are quickly coming to realise most things are possible. We are using lots of different technology to allow most people to carry on ‘as normal’.

“The most interesting thing has been how much more people have to communicate, and how important it is to recognise that it is easy for people to feel isolated,” she continues. “The more we can furnish people with full information about all that is happening across the company the more engaged they feel. Working with engineers, I know that communication doesn’t always come easy to everyone, so making busy people take the time to update on their great developments has been challenging. It has allowed individuals to really shine, and in a strange way united the teams much more.”

On what it is like to work with BT Sport, McKeniry says it is, “never boring!” She goes on: “I work at BT Sport and working with the likes of Andy Beale [chief engineer] ensures that we are all challenged to stay at the forefront of what is possible.

“Timeline is very much a technology company and that knowledge is shared across the whole company so that all of our clients can benefit, but it also means all of our engineers have a pool of people to ask questions or different kit to play with,” she adds. “Timeline moves at a rate that previously I can honestly say, I haven’t experienced before. For someone like me, who wants to be involved, likes a challenge and wants to keep learning it is the perfect environment.”

As to her coolest achievement during her career, McKeniry is stumped. She says: “That is a question I am struggling with. I am a nerd at heart, but it is never what is achieved, it is how it is achieved that I love. From helping get Band Aid 20 delivered to 40 countries across the world in a time before fast internet speeds, to working with the team from across Timeline and BT Sport to deliver a MAM system. At the moment we are all focusing on remote production obviously. Really difficult things at the time, maybe the odd moment of despair, but ultimately achieved with a real sense of pride from a whole team!”

On her top tips for young women (or men) looking to follow in her footsteps, to get to the top of their game in sports broadcasting, McKeniry states: “Go for it. Don’t be afraid to come to events such as the SVG Europe Women’s events. Talk to people there, make sure you connect with them on LinkedIn. There are opportunities available, running jobs or apprentice schemes. Use your time wisely and apply common sense, it is an attribute most employers value above all else.”

McKeniry concludes: “If you put the effort in, you will be noticed, you will be invested in. No one loves showing off all of their technical knowledge more than engineers, do not be afraid to ask questions. There is no such thing as a silly question. And make tea if the opportunity arises, engineers are easily bought!”