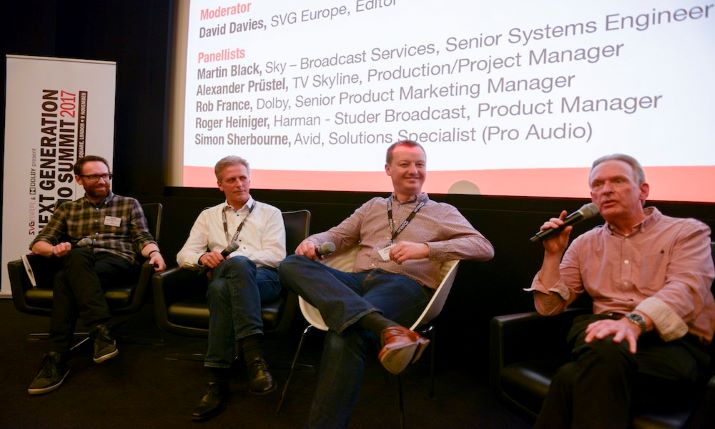 Sky sound consultant and senior systems engineer, Martin Black, has spent more than four decades shaping the way we listen to television. Black has always been focused on how things sound; even now, he still sings in a choir.

Graduating from the University of Surrey with a B.Mus Tonmeister degree, Black began his career in broadcast audio in 1979 with Thames Television’s outside broadcast division. Then 14 years later, he joined Sky in 1993 where he was a sound supervisor for Sky Sports for over 20 years.

With the advent of HD, Black and his colleague Keith Lane were asked to investigate and specify a mixing console to enable Sky to broadcast its live sport productions in 5.1 surround sound. They ended up designing Sky’s entire live 5.1 workflow.

This led to Black and Lane’s Ident Tones for Surround (Blits) 5.1 ident system, audio design for Sky’s groundbreaking Harlequin-1 HQ, working with the EBU on loudness regulations and Sky’s implementation of immersive audio.

Black has also influenced how broadcasters across Europe manage audio with the establishment of the Forum for Advanced Media in Europe (Fame) audio group, which he started with the BBC’s Simon Tuff and is sponsored by of the EBU’s technology and innovation department. Most recently Fame has been looking at how to manage metadata for object-based audio, which will see Black’s legacy live on for years after his retirement.

As he prepares to retire after more than 45 years’ dedication to audio, we ask Black to pinpoint five of his career highlights. Overachiever that he is, he gave us seven…

“I had been a sound supervisor with Sky Sports for 11 years when in 2004 Vaughan Rogers asked Keith Lane and I to research a mixing console which would enable Sky to start broadcasting in 5.1 surround sound as Sky Sports moved into an HD environment. We spoke to a great many manufacturers, and eventually we ended up doing all the audio design for Sky’s first two HD studios, as well as working with outside broadcast companies to create live mixes for Premiership football, cricket and rugby.

“The idea was to convert two of Sky’s standard studios into HD studios, and I was tasked with looking at how to manage the 5.1 surround sound for HD transmission. There were two main aspects to this; in addition to how to mix the audio, we quickly realised that we needed the infrastructure to handle the huge quantity of ports we’d need for 5.1, and we worked closely with multiple suppliers to give us that capacity.

“The format was to have a stereo programme mix and a stereo effects mix, plus a 5.1 surround mix and a 5.1 effects mix. We produced downmixes of both the 5.1s to get the two stereo outputs; the stereo mix was transmitted using the legacy PCM format while the 5.1 surround signals were transcoded from Dolby-E to Dolby Digital for final transmission.”

“Blits was a way to provide a standardised form of channel identification and alignment for surround sound material. It idents all the legs of a 5.1 multichannel signal with a series of short tones at different frequencies to identify each channel. We also use it to phase-check signals.

“More importantly, because many viewers were still listening in stereo, we needed the system to derive a stereo Lt/Rt downmix, so Blits needed to make sense when the stereo output was being monitored or metered.

“As the accompanying Lt/Rt fold-down mix was created by the Dolby DP563 encoder, we worked closely with Mick Dwyer at Dolby to help us develop a tone sequence which made sense when listening on speakers. It was an important test because 5.1 surround for TV has a different track format to 5.1 for cinema, and live surround TV mix engineers have specific requirements, like lowering the level of the surround channels in the downmix so it doesn’t drown out the commentary.

“The first job where I used Blits in anger was in a rebuilt outside broadcast truck; I could immediately hear that the main monitoring speakers were not being fed in the correct order! Blits had already became a core part of Sky’s 5.1 design and was adopted by several broadcasters in Europe and the US, and was subsequently standardised by the EBU as the recommended 5.1 line-up signal (EBU Tech. 3304).”

“A year or two later when Sky designed Harlequin-1 – now Sky Studios – it was the greenest broadcasting complex in Europe, with a huge audio network to manage; a total of 68 modular IO frames across five floors, nine sound galleries and 10 studio floors. The design brief was that the facility must be flexible, so that each production gallery could use any of the studio floors.

“Following my involvement in the development of live 5.1 for HD, I somehow ended up designing and configuring the live audio systems for Sky Studios as well.

“The big shift was that Sky Studios was designed from the outset to transport all the audio as discrete linear PCM channels. We created a production format that used the 16 channels of audio in a standard SDI signal. The 16 channels gave us a stereo mix and a stereo effects mix, plus a 5.1 surround mix and a 5.1 effects mix.

“It meant we could use the same SDI transport to move the audio around, but using all 16 available audio channels (two x stereo plus two x 5.1) embedded in the SDI signal eliminated the need for any Dolby E encoding and decoding within the building.

“Incoming audio gets decoded by the MCR as it comes in from external sources like outside broadcast trucks, and the workflow around the building is on discrete, uncompressed audio circuits. It only gets encoded right at the end to go to transmission.

“The development of this workflow required me to push through the SMPTE ST.2020 standard, which defines how to map serial metadata into the Vanc space of an SDI video signal. We were able to work with a number of manufacturers to sign up to the standard and allow us to make it all work.

“It was a very efficient way to transport the signals, and this system provided a solid base for when we later looked at broadcasting Dolby Atmos.”

“Sky formally adopted the R.128 loudness recommendation in 2013, but I had been working with Florian Camerer and the EBU’s P/Loud group on the regulation for several years.

“The EBU R.128 recommendations sought to implement a loudness standard across all broadcast channels for the duration of the broadcast. Prior to R.128, TV audio level regulations had been based on peak levels, which lead to discrepancies in levels across channels and between programmes within a channel.

“R.128 signaled the end of PPMs (peak metres), which is how we had measured audio levels for years. R.128 recommended the normalisation of audio to -23 LUFS +/- 1 LU with a relative gate at -10 LU and a maximum true peak level of either -3 for compressed digital audio or -1dBTP for linear audio. There was a steering group at Sky which helped implement the changes, but we were already using the RTW TM7 meter in our equipment, so the switch wasn’t too painful.

“In fact, at Sky Sports we were already working to those standards; the studios already had loudness meters next to the PPMs, and every time I checked we were within a dB or so of -23 LUFS.

“As part of my audio work with the Digital Production Partnership (DPP) I also played a lead role in the adoption of R.128 by the UK’s national broadcasters, for which the DPP kindly presented me with an award rather wittily entitled The Quiet Revolutionary.”

“Working on the more creative sound design and contribution mechanisms for Dolby Atmos at Sky was challenging; the big question was how to adapt 5.1 to Dolby Atmos for UHD broadcasting.

“To maintain compatibility with a 1080p workflow Sky initially adopted the Quad HD-SDI format for UHD video. It occurred to me that we now had a further three videos that we could embed audio channels into. This meant we could use Sky’s existing SDI infrastructure for the additional capacity needed for the Atmos channels.

“We had a working system for HD using SDI to carry the signals for the stereo and 5.1 surround mixes; for Atmos we used the second quadrant of the UHD to transport a further 16 channels for the immersive audio; six channels for the 5.1 bed, four ‘objects’ for the front and rear height channels, and the remaining six for other objects such as commentary and PA.

“These are encoded to Dolby Digital Plus (JOC) for the Atmos transmission, while the legacy 5.1 and stereo mixes are extracted from the first Quadrant SDI for the Dolby Digital 5.1 output.

“Premier League coverage in Dolby Atmos began in the 2017-18 football season with Arsenal versus Leicester in August 2017, which was the first of Sky’s live programmes to be broadcast in Ultra HD and Dolby Atmos.”

“I’ve been co-Chair of the Fame audio group with Simon Tuff since its inception in 2006. It’s an EBU-sponsored working group made up of audio professionals and commercial manufacturers.

“One area we have developed is next generation audio (NGA). We know how to do immersive audio with height, but another aspect of NGA is working with audio objects and their associated metadata to provide personalisation – and especially accessibility – for consumers.

“NGA offers potential long-term efficiencies in production and distribution, especially when re-versioning is required. But one of its biggest benefits is the ability to adjust dialogue level relative to other elements in the mix, as this addresses one of the most frequent complaints about TV sound received by broadcasters.

“One problem with personalisation, where the consumer has some level of control of the audio, is the user interface; manufacturers of consumer equipment (TV’s, STB’s, AVR’s, etc) are likely to favour having their own design of interface in preference to adopting a universal GUI.

“The independence of the Fame audio group enables us to speak to a broad range of experts and companies to help explore possibilities, develop solutions and support standards; for example, we were able to work with experts such as BBC R&D’s Dave Marston (who I call the father of ADM!) on promoting the ‘Audio Definition Model’ (ITU-R BS.2076) and it’s streaming variant sADM (ITU-R BS.2125-0) to assist with the develop of a contribution mechanism for OBA which is open-source and can work with different emission codecs, like Dolby’s AC-4 and Fraunhofer’s MPEG H.

“Through the EBU we’ve recently published the overview and analysis document, Ten Things you need to know about NGA, aimed at a broad range of reader from senior execs to technical and creative staff.

“Fame allows us to develop a very joined up system, and it bodes well for the future of audio in broadcast.”

“All that aside, the part of my career of which I am most proud is the work I did mixing shows as a sound supervisor, especially live outside broadcasts. One of my career highlights was mixing the 1995 WBC Heavyweight Championship fight at Wembley Stadium when Frank Bruno became World Champion. Well, that and three Ryder Cups – including the first in HD, in 2006 in Dublin – and the very first live NFL game in the UK, from the then newly revamped Wembley Stadium.

“I thought I was quite good at it. Those were my glory days!”