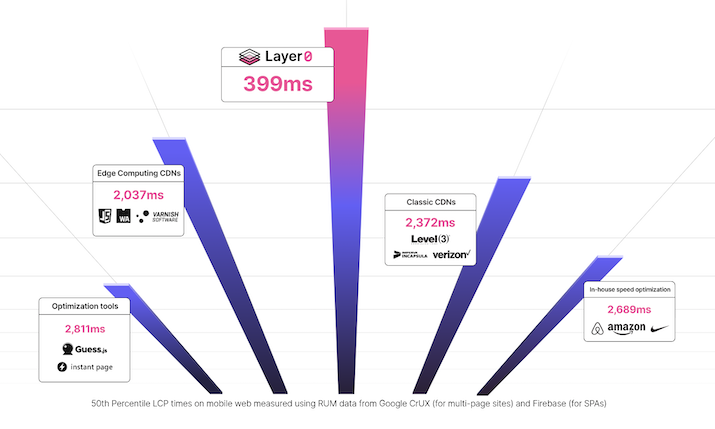 Limelight has released the Layer0 platform on its global content delivery network (CDN), the first new product resulting from Limelight’s acquisition of Layer0.

Layer0 by Limelight is the first edge platform that empowers development teams to ship up to twice as fast and offer sub-second page loads by extending the edge to the browser. Layer0 can augment or replace a site’s existing web CDN and security vendor to deliver faster page loads and lower costs while the development team gains new features that cater to the dramatic shift to zero ops and programming at the edge.

Leading companies such as Shoe Carnival, Kate Spade and Sharper Image have improved their developer productivity and boosted website traffic, conversions and revenue thanks to Layer0. Their teams have been able to ship features significantly faster. “Layer0 makes implementing new functionality much easier, hands down, than anything else. It’s more flexible and more user friendly and the platform takes all the guesswork out of deployments and caching,” said Jason Adkison, Frontend developer at Shoe Carnival.

Shoe Carnival’s site, which uses the Salesforce Commerce Cloud eCommerce platform, saw dramatically better performance: page load times went from five seconds to under a second when measured on a mobile device. At Sharper Image the development team is delivering instant page loads. “Everyone has commented on how blazing fast our site is, which is thanks to Layer0. It was one of the fastest implementations we’ve ever seen,” said Sam Grossman, COO at Sharper Image.

Layer0 by Limelight capabilities include: the world’s second-largest global, private edge caching network; EdgeJS, the world’s first JavaScript-configured CDN; and the industry’s lowest latency edge logic. Other features include serverless compute that is said to be easy to deploy and debug, DDoS, WAF and bot-detection capabilities, and edge enablement of 15 frontend frameworks including React, Vue, Next.js, Nuxt.js and Svelte.

These capabilities and more work seamlessly together using one deploy command, which is simpler than purchasing and stringing together the over 20-point cloud solutions required to deploy and run a sophisticated, modern website.

“With this launch, website builders have a dramatically simpler yet more capable infrastructure in the cloud for their websites and APIs. As the hyperscale cloud providers and the existing edge platform vendors keep offering point ‘cloud primitives’ as ‘hammers and nails’, Limelight is delivering what customers have been asking for – an integrated solution that securely delivers the best productivity and performance outcomes in the market,” said Ajay Kapur, chief technology officer at Limelight.