Live at the Open: on course with CTV 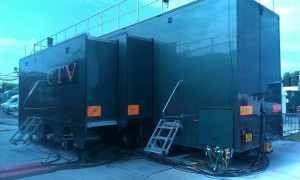 SVG Europe is at Royal Liverpool on a glorious day which began with heavy rain but looks set fair until close of play. Our time on location has provided an opportunity to take a closer look at some broadcasters serviced by Euro Media Group supplier CTV.

TV Ashai has an unusual set-up in that there is no on-course studio or commentary position. But with a relatively small team it covers a lot of ground. All reporting is done live, for which CTV is supplying two radio cams for on-course and practice range coverage.

It also has a hoist camera for general coverage and beauties, as well as three other roving cameras with 18 to 20 drops around the course enabling the camera team to leapfrog coverage. The recording operation includes an XT3 and 2 x XT2 EVS from which it composes hightlight edits. CTV also takes in about 100 BBC feeds so the team can cherry pick what it wants.

The Golf Channel, another CTV client, is deploying five five cameras and a two-camera studio at the 18th and with views of the clubhouse. It’s not permitted any live coverage but it does cover pre- and post-hole interviews. In addition, it provides mix zone cameras and a pool feed to the press centre.

For IMG’s live streamed operation for the R&A there is a three-camera studio near the HSBC Pavillion (for a presenter and two guests). It can draw on two RF ENG units and has access to the BBC’s three hole coverage. Three Final Cut Pro edit suites are used to turn out teasers, promos and features from the ENG material.

Over at the BBC we find four main areas of operation. One truck (contracted to Telegenic T21) is performing domestic coverage including studio, BBC commentary, select on-course reporters, practice range, interview cabins, primary interviews and so on. It fields its own RF camera and unique EVS for this work.

A second main scanner (T25) has a dual purpose. It’s the BBC submix area of on course ISOs and RFs which feeds into the host coverage. It also contains the sound unit for the effects submix and is the back up should there be a catastrophic failure in the main truck. In the same way, the vision mixing desk provides back-up for the main truck. In the event of failure the team simply move into this truck to find the exact same facilities.

“We knew we’d be stretched with concurrent test match (at Lords) and golf (Women’s Open preceding this event) and with two extra clients, plus making sure the BBC has everything they need, which is why we worked with Telegenic,” explains Hamish Grieg, CTV, technical director.

The two other BBC trucks are CTV’s. OB10 is the main golf base for producing the host coverage and international highlights (showing a range of player action and using the main effects submix), whilst OB14 is in charge of three hole coverage (14,15,16) available to all broadcasters and for the live at Open R&A streaming.

Audio is built on MADI routers interfaced between trucks and course through Hydras and tied together with a Telex frame.