Live at US Open Tennis: ESPN surrounds the Open and makes plans for 2015 and beyond 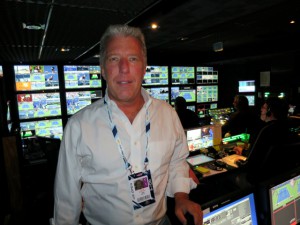 ESPN’s US Open production team is into its final days of 2014 major tennis coverage and Jamie Reynolds, VP of event production, is the first to admit that it has been a really good year for ESPN at the majors. “The Australian Open was a terrific tournament, and it was a little bittersweet as, next year, the host operations will be under the domain of Tennis Australia without Channel Seven, although they will still be there,” he says. “And, at the French, VER did a nice job for us [on the technical infrastructure]; they have a professional approach as they make a bid to become a player in that space, and that was refreshing.

“And then Wimbledon, with the BBC and Visions, has a good infrastructure that we may look to as a model for how to do New York next year because the metrics and scale are similar.”

The “next year” that Reynolds is referring to is the 2015 US Open, when ESPN will begin an 11-year contract as the sole domestic US broadcaster as well as the provider of the host-broadcast coverage of the tournament. ESPN will be taking over for CBS, which has been at the centre of US Open broadcast operations since 1968.

“This is CBS’s year and an opportunity to do what they want and celebrate what they have done for this sport while we just feather the edges,” says Reynolds.

One of the new feathers this year is a channel on ESPN3 called ESPN3: Surround. During primetime matches, viewers can tune in and, on a single screen, see not only the main broadcast coverage in the centre but also isolated camera angles from the Spidercam and isolated shots of each player from the cameras near the net.

“We’re always taking assets and looking for opportunities to channel different experiences. That is what ESPN Surround is as it offers a composite switched feed with discrete cameras,” says Reynolds. “So it is a bit of a unique perspective as the viewer at home can see what angles are available.”

The Surround offering came together very quickly about a week before the tournament started, according to director of Operations Terry Brady. “There are two ways we could have done it,” he says. “We have a four-channel mux signal sent back to ESPN headquarters in Bristol so that the team there can create ESPN Surround. We had great cooperation from Level 3 on bandwidth and encoders to make that happen.”

The four-channel muxed signal sent to Bristol, CT, is part of the reason the amount of traffic sent between the USTA Billie Jean King National Tennis Center in Queens and ESPN headquarters has grown four to five times in the past three years. Signiant file-transport technology plays a big role in making that happen.

“We can share content with Bristol for social media or Sportscenter segments, and we have drop folders for discrete groups of staff,” says Chris Strong, technical manager for the US Open. “Meanwhile, they can build graphics and drop it into our folder.”

Another new technology that ESPN is finding great success with is the Dejero bonded-cellular ENG transmission system.

“We first used it at Wimbledon,” says Brady, “and use it a lot on live shots from around Manhattan, with the same student who used it in the UK getting shots from places like Little Italy or the Staten Island Ferry.”

The system, however, is not being used onsite because of the large amount of regular cellular traffic.

Joe Durante, ESPN’s manager of the Emerging Technology Remote Group, is also on site handling the multiple data feeds from IDS, IBM, and Hawkeye and then turning it around into graphics that can be pushed out to everything from the scorebug to the bottom line, and more.

“With the system the TV production team can call up any court and the stats will already be there,” he says. “And the data is available to all our entities like ESPN Deportes, Argentina, Brazil, and ITV. We can also provide the same level of graphics and stats regardless of what level of match it is, including the juniors.”

ESPN CourtCast is also part of Durante’s world, offering an extension of the Hawkeye data and also polling interfaces for live polls and votes of viewers as well as tracking twitter feeds and mentions.

“There is an app that interacts with the tweets and allows them to be searched for any player and it’s phenomenal to follow images and videos and see how it has blown up [in popularity] in the last year and a half.”

The tournament, to date, has been blessed with very good weather and also very few major upsets, making for a solid final few days of semifinals and finals. One of the highlights early on was the first-round win by 15-year-old American CiCi Bellis, an upset that captured the attention of the sports world and teenage girls.

“We saw that breaking and ran an RF camera out into the stands to chart the end of the match,” says Reynolds. “It was a pretty good opportunity to catch lightning in a bottle and the energy on court 6.”

Court 6, he adds, is part of a three-court complex (along with 4 and 5) near the player practice area that already has him thinking about next year.

“It’s a pretty good venue, and I can picture setting up a two-point camera system that drifts over the bleachers and can pan, tilt, and zoom over the courts and also dip in and see the players warming up,” he explains. “The practice galleries are like a driving range in golf so maybe we host a position there during the day where players and coaches can visit the set or we can have someone down on the court. It could be pretty dynamic engagement.”

Fresh ideas are popping up every day for Reynolds and company as they begin the challenging task of putting together a plan for next year’s tournament.

“We have had the luxury in the past of coming in and being the beneficiary of the responsibility of CBS to deliver the host feed,” says Reynolds. “But now we are going to build from the ground up, and that is a new dynamic for us.”

The good news, he adds, is that ESPN has a good understanding of how to layer its domestic and international operations on top of a host-broadcast feed. “So now we have to surround that with technically skilled folks and build out the infrastructure,” he explains.

“And we want to make that as robust as possible by taking what is good in Oz, good at the French, and good at Wimbledon. By taking the best of those three experiences, we perhaps can jump the US Open ahead of the curve.”

Playing a major role in that will be Gearhouse Broadcast. At the Australian Open, it supplies much of the technical infrastructure used for the host-broadcast operations.

“[Choosing Gearhouse] was vetted out between our operations and production teams,” says Reynolds. “We had an extensive RFP out, and a number of vendors and partners expressed interest. There were some nice and smart ideas.”

Gearhouse Broadcast is known for its solid work on flypacks so there is a pretty good chance that the compound will emphasise flypacks more and remote-production trucks less. But Reynolds believes that trucks will still be part of the mix.

“The biggest wildcard for us is that Wimbledon is a week later [than it used to be] and that compresses the Summer Series [of tennis tournaments leading up to the US Open],” says Reynolds. “So it is a three-dimensional chess board, as we have staff at Wimbledon, getting ready for the Summer Series and then boots on the ground here.”

As if that weren’t enough, there is the ongoing transformation of the Billie Jean King Tennis Center itself. Already, 12 massive pylons that descend 180 ft. below ground have been installed as the foundation for a roof at Arthur Ashe Stadium. And two of the premier courts, Louis Armstrong Stadium and the Grandstand, will be torn down and replaced elsewhere. That means that the next three years (the roof is expected to be completed by 2018) will be years of change.

“What can we commit to in year one that may change in year two?” says Reynolds. “We need to be nimble, agile, and modular enough to change year by year. But, by 2016, we will have a better sense of things.”