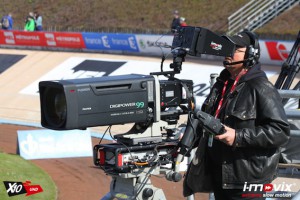 I-MOVIX is claiming world premiere use of the X10 UHD system as a live broadcast production tool at the 113th edition of the Paris-Roubaix stage race, the tenth race of the 2015 International Cycling Union (UCI) World Tour. France Télévisions used an X10 UHD system in 1080 HD mode at 500 fps super slow motion delivering a continuous 10 times feed of an extraordinary quality. In particular, the I-MOVIX system, provided by AMP Visual TV, offered a continuous streaming of super slow motion images of the riders crossing the finish line. For this event, the I-MOVIX X10 UHD system was tested with a FUJINON XA99x8.4 BESM box lens and IBE HDx1.4 adapter.

“The image quality of the continuous super slow motion shots was really impressive. With this high frame-rate footage, we produced image details we couldn’t even imagine before”, said Francis Cloiseau, Head of Sports Production, France Télévisions.

“With the continuous 10x super slow motion mode in HD at 500fps, since everything can be recorded and replayed in slow motion, the production did not miss any action of the final crucial moment of the race: the riders’ last efforts to reach the finishing line. This innovative broadcast production tool clearly extends the potential for creativity and increases the value of our content.”

Combining the core X10 ultra-motion technology with Vision Research’s Phantom Flex4K camera, the I-MOVIX X10 UHD supports operation in a range of modes to meet differing production requirements, and can be instantly re-configured for new 4K or HD shooting scenarios.

For very high-frame rate ultra-slow motion in 4K sports coverage, the system operates in USM mode to deliver instant replays of up to 1,000fps. For continuous non-stop recording, SSM mode delivers up to 120fps at 2160p60. When operating in HD resolutions (1080p or 1080i) X10 UHD offers up to 600fps in continuous SSM mode, and up to 2,000fps in USM mode. The system can also complement these specialized applications by performing in a conventional live camera role.