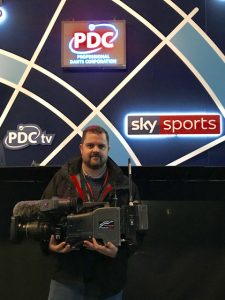 The weekend before the event kicked off, on Thursday 13 December, Broadcast RF received a request from the production team at Sky Sports for UHD RF cameras with star filters.

He commented: “At the weekend we had a request from Sky Sports for the RF cameras to have star filters; I had a solution up my sleeve, but I didn’t want to suggest it until I knew we could pull it off.

“The problem is, Sony camcorders do not have star filters, and currently standard Sony 4K broadcast line cameras can’t be converted to RF,” he went on. “The solution was to use the Grass Valley GVG 86N ‘4KRF’ camera heads, of which Euro Media Group has two, but that had its own problems for the production crew as it would mean a mix of camera types.”

Brandrick explained: “The majority of the British OB market is based on Sony camera technology, but our prime solution for RF is, at the moment, the Sony camcorder. However the OB companies can be reluctant to take Grass Valley UHD RF cameras on a Sony job because of the colour matching issues. The important thing is that all the cameras match.” 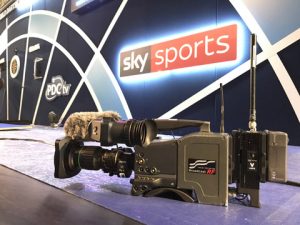 He went on: “Our problem with UHD is that the RF technology has caught up, and we now need broadcast camera technology to catch up.  The GVG 86N 4KRF is a great camera head to use, but it’s a one trick pony as it cannot be used as a cabled camera. Sony does not yet have a solution for RF other than its camcorder range.  Those are the facts.”

Brandrick bought one Grass Valley GVG86N 4KRF camera to the event on the final rig day, Wednesday 12 December, for a side by side test, so that director Andy Finn could compare the output of the Grass Valley camera to the Sony camcorder, and to see if it would be possible to match the camera to the rest of the production. The other was back at Broadcast RF’s base, ready to be delivered to Ally Pally, which, when the GVG86n 4KRF camera was deemed acceptable, it later was.

Concluded Brandrick: “We have also recently used the Grass Valley GVG 86N at the rugby in Twickenham for the first time, and it performed brilliantly. It would be nice if we had more options for UHD RF cameras that OB companies could use on their normal day to day projects. Something for the camera manufacturers to think about?”