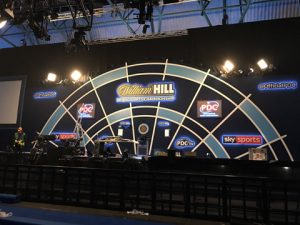 Setting the stage at Ally Pally before the event begins

The 2019 William Hill PDC World Darts Championship at Alexandra Palace is making history with two firsts: the first darts competition covered in UHD by Sky Sports, plus the introduction of Dolby Atmos to add impact in the quarter-final, semi and final.

The first projectile thrown on Thursday 13 December was captured by Sky Sports and its team from OB provider CTV Outside Broadcasts, with the help of partners including Broadcast RF, CollecTV, Mark Roberts Motion Control (MRMC) and Alston Elliot Graphics. The event runs until 1 January 2019, with a gap in the middle from 24 to 26 December, and 31 December. 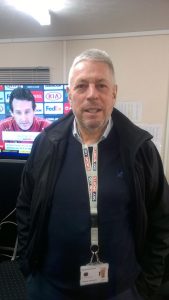 Robin Broomfield, technical specialist for Sky Sports Operations, told SVG Europe: “This is the first darts event we’ve done in UHD, and we’re rolling in Dolby Atmos for extra impact for the finals. We’re trying to increase our portfolio of UHD and this event is a compact two and half weeks where we can do it all in UHD and end in Atmos as well. It will give our viewers a much better experience in terms of the technical quality and viewing experience.”

Andy Finn, director of the 2019 World Darts Championship at Sky Sports, said the use of UHD in this competition is just another technical issue to overcome in the annual evolution of technology: “There are a lot of challenges [for HD] year on year anyway because production requirements change, and that might put a different emphasis on the technology we’re using. So to go to UHD provides even more challenges, but the benefits far outweigh those. We’re trying to achieve the best possible experience for customers at home.”

On the use of MRMC UHD robotic camera Hot Head systems, Finn stated that Sky Sports has been using them for a couple of years now, as they enable the team to provide an accuracy that you do not get with a human operator — and in a highly repetitive environment it frees up camera operators to allow them to concentrate on getting their best shots. 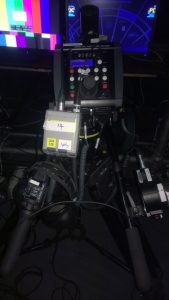 On the robotic cameras, Finn noted: “It’s very much a 21st-century skill set. There is a touchscreen interface that drives two of the cameras that are software driven, and on three of them, a camera operator uses a software interface to operate them [two hybrid software interface plus human guided Hot Heads and one panel-based Hot Head].”

Finn said the software used to control the robotic cameras is highly intuitive, so, he noted, “even I can operate those cameras”. Yet he added: “I’d still agree that the traditional skills of focus, zoom, pan and tilt are still there; you still need to frame the shot so you still need a camera operator’s understanding.”

The three Superslow cameras shoot at 150 frames for clarity in replay. Broomfield commented these are 1080p50, not UHD: “We could do UHD, but the replays would be slowed down. Sometimes you have to make a compromise, but with time those compromises will disappear.”

Continued Broomfield: “Sometimes facilities don’t translate exactly from the HD world to the UHD world, because UHD technology is still developing, ie, some technology isn’t developed enough in UHD, such as replays. Some elements we run in 1080p50 (HD at 50p, not quite UHD) because the technology isn’t ready for UHD; replay is a classic example. If we do UHD replays with EVS the process would be slower than doing it in HD and therefore compromise the production, so we’ve found a middle ground which is 1080p50.” 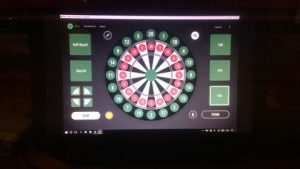 Broomfield’s role is to help Andy Holmes, senior production manager at Sky Sports, director of the event, Finn, and CTV Outside Broadcast in setting up the UHD and Dolby Atmos process, while also ensuring that all the HD facilities will work for UHD. Explained Broomfield: “In theory, UHD shouldn’t impact on the way directors and production teams are working or what they want to do. You’ve got to give production the tools they’re used to working with in HD. So in this case at the darts, we’re trying to get as much as we can at native UHD; Sky’s specification is that 75% should be native UHD [on a UHD production]. From my perspective, I’d like it to be 100%, but we’re a little way from that.”

He added that there are other systems such as Grass Valley’s LiveTouch, that are UHD ready, but EVS is developing its UHD functionality. “We hope to start testing UHD replays in the New Year,” added Broomfield.

Pushing all systems for UHD

CTV OB is using its OB4 UHD truck, which was upgraded for UHD in 2017, including a Sony XVS vision mixer. On-site also is MVT5, a server truck containing two edit suites kitted out by CollecTV, and another support vehicle containing a third edit suite.

Dan Smith, unit manager at CTV OB, commented: “For us at CTV this is probably one of the largest UHD productions we’ve ever done, plus Dolby Atmos: we’re really maximising the OB in its capabilities, pushing it to its limits. There are lots of conversions going on between audio and video which is quite complicated for us, but we have systems in place that means we can check the sync. The graphics [supplied by AE Graphics] are for the first time in UHD, which quadruples the number of feeds we have coming in from them as well.”

Chris Sarson, managing director at CollecTV, commented on the upgrades to the regular system his company has provided to CTV OB and Sky Sports: “We’re working in 1080p50 for the first time in darts, so we upgraded the network to 10GB and storage has been doubled to 100TB usable. All the edit and replay side is 1080p50, to integrate with the UHD broadcast.

“It’s exciting; this is the first large scale 1080p50 production we’ve been involved with; they’ve really pushed the system on this production with three edit suites and three producer stations for the Sky Sports darts team,” said Sarson. “It’s a really full-on show.”

He noted that while CollecTV does 1080p50 for Sky Sports and CTV OB cricket, that is, “a single edit, so this is much bigger and a good test for us,” concluded Sarson.

The World Darts Championship 2019 marks the first time Sky Sports has used Dolby Atmos for darts coverage. Dolby has worked alongside Sky Sports and CTV OB to enable the team to work out the best immersive sound experience to use for the quarter and semi-finals and overall finals. Dolby set up Genelec speakers in OB4 in a 5:1 set up so that Adam Brewer, audio supervisor at Sky Sports, is able to experiment with the sound to make a decision before the quarter-finals on the best formula to broadcast.

Brewer said: “Dolby has deliberately built the system so it decodes the same way as it would at home. 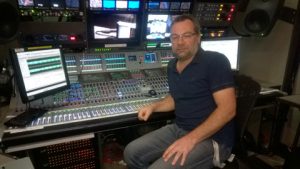 As we go over the next weeks I’ll play with it to see what will make the best immersive sound experience, finding out what will be most comfortable for viewers; it’s about being stroked by a feather or smacked with a hammer, and we’ve got to change all the hammers to feathers,” Brewer stated. “So I’m being a bit of a geek and I’m playing with it. I’ve got seven or eight days to work out what works; as this is a 16-day tournament, in this instance I do have the luxury to be able to refine it.”

Broomfield added on the use of Dolby Atmos that Ally Pally is, “a good venue, a nice space to create immersive audio, so any viewer with an Atmos sound system or soundbar will feel like they’re in the venue with us.”

The biggest challenge for the audio team is, as always, keeping video and audio in sync, but the use of Atmos throws another spanner into the works. Brewer commented: “The audio synchronisation of the whole programme is probably the biggest challenge for Atmos. Audio in this infrastructure often takes a different path to video, so when they meet back up again you have to ensure they sync up.”

Broomfield agreed: “Audio sync is one of the biggest challenges we face when the workflow is UHD.” However, Broomfield observed that using UHD and Dolby Atmos raises the technical level of the HD production, and therefore the experience for the majority of viewers, who are still using HD TVs and must not be forgotten. He said: “By shooting in UHD and Atmos the quality of what we’re doing is much better, and that does translate when you downconvert to HD. We’re getting much closer to the pure, technical quality of HD than before; certainly, our HD football looks better now, since we rolled in UHD football. It’s marginal, not huge, but it still makes a difference.”

Referring to the use of Dolby Atmos, Finn concluded: “We want [viewers] to feel they’ve got a seat here [at Ally Pally] with the hair on the back of the neck sensation. Dolby plus UHD is giving everyone as diverse and rounded an experience as possible.”