Live from Cardiff: Heineken Cup rugby bows out with a final flourish 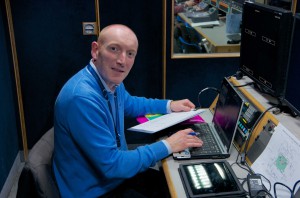 Europe’s top rugby competition finished at the weekend, when the last ever Heineken and Amlin Challenge Cups took place in Cardiff, under the watchful eye of host broadcaster, Sky Sports, to be superseded by the European Rugby Champions Cup next year.

Although the new European competitions have to be shared with BT Sport, Sky will show more rugby than ever before. It will be host broadcaster for 30 matches from the Pro12 (plus the play-offs and final), including two games on eight weekends, each with a minimum of 14 cameras. It is also taking at least 55 matches from the Top 14. As for sharing the Champions and Challenge cups, Gus Williamson, Executive Producer, Rugby Union, Sky Sports told SVG Europe: “It will be nice to have a direct rival. Competition is the life blood of sport.”

A lot has changed over the years that Sky Sports has covered the Heineken Cup. When the final was previously in Cardiff in 1996, it was in SD and there were just eight cameras. In 2006 it was HD, with 14 cameras. Since then there has been the rise of touch screens for analysis, high frame rate cameras, and ref cam, as well as 3D.

“Viewers have very high expectations, and we have to meet them. Before people say we need to change, we have to anticipate that and innovate,” he said. “What doesn’t change is the narrative of the game. We must not let the tail wag the dog.”

Because the Amlin final took place on the Friday night, at the Cardiff Arms Park (right beside the Millennium Stadium), and the Heineken Cup final on the Saturday afternoon, there wasn’t enough time to allow one production team to take care of both. Indeed, there were effectively three separate productions on site: HD coverage of both matches plus 3D production of the Heineken final, with all the trucks from Telegenic

There were also trucks from France TV, which was doing presentation on site with pitch-side guests, and from the Welsh channel, S4C, which also had a presence pitch side and its own long-lens camera on an iso feed.

Sky Sports used 21 2D HD cameras for the Heineken, and nine 3D cameras, plus a length-of-the-pitch 3D rail cam, provided by ACS — with the 2D production taking the left eye from the 3D rig, as well as a Spidercam (the first one used in the Millennium Stadium although in 2D only), with a 3D output interpolated by Sony’s MPE-200 stereography system.

There was also a dual-camera 3D NAC Hi-Motion II system, from Fletcher UK, in the reverse position, with 2D replays taken from one camera. It had only been used for one rugby match for Sky 3D previously (the Autumn Internationals), and a few soccer matches

The 3D transmission is not as popular as HD. “It appeals more to people who aren’t archetypal sports fans, but it gives a new perspective. It’s the sort of technology that early adopters love,” said Williamson.

“We try to do things a little differently in 3D — otherwise, what’s the point? It’s a good way to experiment, such as where you put the camera. You can’t put them in the normal places, so you have to think differently.” Instead of having cameras in the gantry, they try to create more of a feel of the viewer being in the stadium. 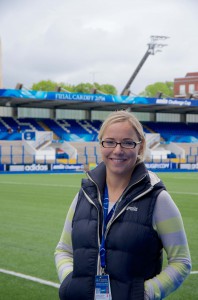 The Amlin final used 15 cameras, including two Sony HDC-3300 (3x slo mo). There was also: a Sony HDC-2500 (2x slo mo) camera on a wireless Steadicam; a hand-held Sony NEX-FS700 (which can go up to 240fps in HD, but is typically used at 200fps, depending on lighting levels), which was adapted by Telegenic and Broadcast RF for use as a wireless camera, using two feeds running through an Axon card in the truck to combine them; and the Sony HDC-3300 (3x) ENG camera, which was used for the first time by Sky on rugby.

This wasn’t used as a live match camera but to gather material for teasers, half-time/full-time analysis and musical montages, as it had to connect via fibre — but was only connected when the cameraman had something to upload. The referees of both matches were fitted with vest-mounted Ref Cams.

“Apart form the Autumn Internationals at Twickenham, this is probably our biggest spec of the season in terms of cameras and technology on-site,” said Jennie Persad, Production Manager, Sky Sports.

One technology Williamson believes is helping explain the game better is Sky Cart, which was introduced last Autumn. The touch-screen monitor, which is mounted on a medical buggy, can be brought onto the field for match previews and half-time or full-time analysis and interviews. The system, using ChyronHego graphics, has to be allocated a particular position on the pitch, as it requires cabling.

“As it is new to a lot of stadia, we’ve had to do detailed surveys, bringing it down to show them how and where it comes on and off, but every stadium has worked out a way. No one has said no,” said Persad. Besides the Millennium it has also been used at Wembley, Twickenham and Ravenhill (Belfast). It has also been cleared for use at Dublin’s Aviva stadium.

By having the cart pitch side, viewers get to see more of the atmosphere building as the game approaches and the teams come out to warm up, and it is particularly useful after the match so that players can see the action and make comments.

In many cases there is also a studio presentation at the stadium, but for the final the presenters were on the balcony outside. “It’s fairly tight, but it means you get all the atmosphere pre and post match,” said Persad.

“I think what Sky Cart gives you is a wonderful way of getting players to talk about their game,” said Williamson. “If you freeze frame the action, you can talk through what they were thinking at that critical moment.”

Players seem to like it. When it was used at the O2 Arena for tennis, one player couldn’t do his interview slot, but asked to do it again the next day rather than miss out. It is also being used for Formula One and cricket. “It’s more interesting than just standing there talking, especially as the player probably hadn’t seen his goal or rally.” It is all part of “trying to get under the skin of players,” such as the use of dressing room cameras (albeit without audio), which was in use at the final in the Saracens’ changing room.

To add to the statistics available to viewers, Sky Sports is hoping to be able to use the information from the GPS tags most players now wear. This is being researched in a not-for-broadcast trial this week, “but you need buy-in from the players, to get permission to use the data streams,” said Williamson. He hopes that it will help people to understand the game better, but it needs to be presented better than the huge amount of stats that are already available on the web, and put in context.