Live from Cardiff: Riedel Bolero goes to the wire for Sky Sports boxing 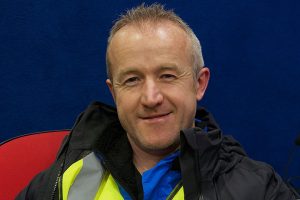 Sky Sports sound supervisor Mark Finch was particularly keen to try Bolero because it is all-digital, meaning there wouldn’t be as much interference, which can be an issue on a big production like this.

Having previously used RTS Telex talkback feeding a Motorola system, going digital, explained Finch, “will make communications backstage a lot smoother, cleaner, clearer, so there won’t be so much ‘What did he say?’ or ‘Say again’ as you normally get. It will make it much more efficient.”

The massive advantage was the audio quality, even when the boxing was on

Instead of just talking to the director and listening to the director, it should also allow users to talk to many other production staff, with six individual locations per pack (with each unit customisable). However, as Sky was trialling a limited number of units alongside its normal intercom systems (with 50 Motorola units), these options weren’t available for the Joshua-Parker fight.

One advantage of using the Bolero, particularly for floor managers who need to carry out lots of detailed conversations, is that they’d only need a single pack, as Bolero can send and receive at the same time, whereas they usually need two Motorolas (one to talk, the other to listen), as those devices can’t do both at once.

The Bolero system was set up with three 4-Wires – with the three channels used for Sound talkback, Eaglecam talkback and a reporter IEM backstage.

“The massive advantage was the audio quality, even when the boxing was on,” said Finch. “Both the truck and crew could give and hear clear instructions first time. RF coverage was very good inside and outside the stadium. I would say that it made our lives in sound easier on the day and night of the event.”

The Bolero signal was not affected when the stadium filled up with supporters or when Joshua’s ring walk pyrotechnics were set off.

“As we only used the Bolero as a replacement for the Motorola RTB, I would really like to see it integrated into a full Riedel TB system. Then the full capacity of the Bolero packs could be used,” he said.

“The only one problem we had was there were not enough Bolero packs in the demo kit. We needed and could have used more.”

The Riedel Artist 64 matrix was set up in the lines room at the stadium. The frame contained an AES67 card to communicate to the antennae, and an AIO analogue card to connect back to the Telegenic OB. 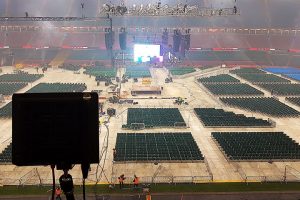 One antenna covered the whole of the pitch area, as well as some of the corridors and seating

Three antennae were set up around the stadium to give coverage in all the areas Sky needed high-quality communications.

The antenna for the stadium was placed on the Level 6 gantry position and its GigE port was connected back to the switch using a generic fibre media extender over the stadium’s fibre infrastructure and powered using a local PSU.

The last antenna was placed inside on the 2nd floor, where the backstage and changing areas were. This antenna was again connected using media extenders over the stadium fibre infrastructure and locally powered.

“The three antennae gave complete coverage of the stadium, backstage and production areas, which were all the areas needed for the Sky production crew,” said Taylor. “When performing a walk test, it was found that the coverage extended into the underground carparks and inside the stadium’s other floors, including the floor 5 stadium media management room.

In all the areas covered, the signal was strong and audio was extremely clear, thanks to the high quality and low latency 7Khz audio bandwidth codec, he added.

“Setting up was simple by using the existing fibre infrastructure in the stadium. If we take out the time it took to get power and access to the rig areas, setup must have been about one hour.”

In total, nine Riedel Bolero belt packs were distributed amongst the Sky production staff, which included one to the Eaglecam operator, one to the backstage reporter and seven to the sound production crew.

Taylor added that, with the setup provided, “all nine Bolero packs could be in one area and still connect to a single antenna, thanks to the Bolero’s high-density antennae, which can connect to up to ten packs at one time. The users of the Bolero packs could walk between the different areas without experiencing dropout because of the seamless handover between Bolero antennae.”

There were three conferences set up in Riedel Director, one for each of the groups, Sound, Reporter and Eaglecam. As well as the Bolero belt packs in the conferences, an analogue 4-Wire was added to include the two-way connection to the OB talkback system.

Riedel headsets were used with the Bolero packs, and “we found that the high level of noise in the arena meant that double-sided Pro and Max headsets were ideal for good noise cancellation,” concluded Taylor.

Anthony Joshua vs. Joseph Parker took place on 31 March 2018 at the Principality Stadium in Cardiff and was broadcast live on Sky Sports Box Office.