Sony President and CEO Kaz Hirai took the stage at the company’s CES booth not only to highlight the latest products featured at the show but also to assert that the rebound of Sony’s consumer-electronics business last year is only the beginning.

“I strongly believe that there is still room for even more innovation in consumer electronics,” he said during the press conference. “When Sony’s consumer electronics business was struggling over the past several years I was actually asked often why I was retaining those business units. But, quite honestly, the answer was absolutely clear to me – that is because there is still so much that we can do to innovate to bring [consumers] the most meaningful, creativing entertainment experiences through all of our Sony products.” 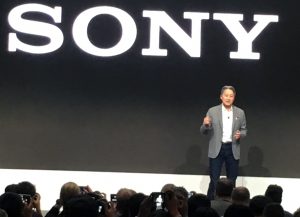 Chief among a host of announcements made at the press conference, Sony announced two new series of 4K HDR television sets: the X900F LED and the A8F Bravia OLED series. The sets are not only 4K HDR but also improve SD and HD content to near 4K HDR quality with the combination of the company’s picture-processor and panel-control technologies.

The new A8F series builds on last year’s A1E, Sony’s first large-screen Bravia OLED 4K HDR TV, by incorporating Sony’s 4K HDR picture processor X1 Extreme and Acoustic Surface technology. X1 Extreme precisely controls the massive number of pixels and extends the capability of OLED to deliver a solid 4K HDR picture. Unlike conventional LED, where the sound emanates from the bottom or sides, the A8F enables a fusion of image and sound, with voices appearing to come directly from the characters’ mouths and explosions directly from the action on the screen.

Sony is also expanding its X900F series given customer demand for larger screen sizes. The new premium X900F 4K HDR TV series is available in 85-, 75-, 65-, 55-, and 49-in. Classes. Featured with the X1 Extreme processor, the X900F provides a wider selection for customers looking for bigger, premium 4K HDR TVs.

As screen sizes get larger, the industry has struggled to manage blur in fast-moving scenes. The X900F series attacks this issue with X-Motion Clarity, a new technology developed to keep fast-action images, such as live sports, smooth and life-like. The new X-Motion Clarity technology applies Sony’s proprietary direct LED-panel local-dimming algorithm to control luminance and optimize its duration. Therefore, pictures are clear and smooth with virtually no loss in brightness.

Dolby Vision is supported on the A8F and X900F series as well as on several 2017 Sony models. In addition, the X900F series is designed to perfectly match Sony’s new Dolby Atmos sound bar, the HT-X9000F.

To fully integrate into the smart home, Sony’s 2018 Android TVs have Google Assistant built in, making it easier to discover and access content and to control smart home devices through a Sony TV. The Google Assistant on Sony TV works just by pushing the microphone button on the remote and verbally asking a question or saying a command. Furthermore, Sony’s Android TV works with popular smart speakers, such as Sony’s own LF-S50G, Google Home, or Amazon Alexa.

Hirai said both series will be available this spring with pricing to be announced.

The prototype of X1 Ultimate next-generation picture processor is also on display at CES. It provides twice the real-time processing power of the current X1 Extreme. Bringing out the best of both LCD and OLED display panels, it seeks to deliver the highest level of picture quality in BRAVIA history.

An 8K display featuring X1 Ultimate is also being showcased. Combined with Sony’s backlight technology, the prototype 8K display features real-time processing of 8K HDR content as well as a peak brightness of 10,000 nits, the highest possible in HDR.

Also announced are the HT-Z9F, the world’s first (according to the company) 3.1-channel Dolby Atmos sound bar, and the HT-X9000F Dolby Atmos sound bar. When Dolby Atmos is paired with Sony’s new Vertical Surround Engine, consumers can experience virtual three-dimensional sound via an alternative approach to ceiling reflection or up-firing speakers.

Besides the TV and speaker announcements, highlights at Sony’s presentation included a new camera-control box that expands the possibilities of RX0; a major focus on integration of AI and robotics (including the return of Sony’s ‘aibo’ autonomous robot dog); a new PlayStation VR experience from the world of The Last Guardian; and two new Xperia super–mid-range smartphone models.