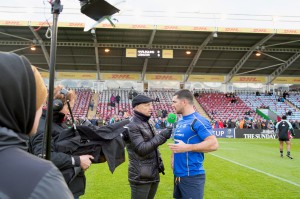 There have been many changes in European club rugby this season: the reduction from 24 teams to 20, the changing of initials from ERC to EPCR, and the addition of a new player on the broadcasting side, as BT Sport has extended its reach from being the home of English Premiership rugby into screening half of the Champions Cup matches in the UK and Ireland.

To differentiate its coverage, BT Sport has endeavoured to bring a more relaxed, and informal presentation style. Its intention is to “have a bit more fun,” which is obvious in its weeknight magazine programme, Rugby Tonight. However, making the sport more approachable also extends to its match-day coverage, as shown on Sunday, when it was host broadcaster for the Harlequins v Leinster Pool 2 clash from The Stoop, in Twickenham.

Telegenic, which provides all of BT Sport’s OB trucks for rugby, supplied its T25 4K OB, but in HD mode — although BT did use it for an end-to-end Ultra HD test at the Premiership rugby final last season. The 24-camera triple expanding unit was equipped with 19 cameras on the day, including Sony HDC-1500, 2500 cameras and two super-slomo 3300 models. BSI provided the RF equipment for the two touchline/interview cameras and Ref Cam. There was also a Polecam, for high angles on the line out and crowd reaction shots. 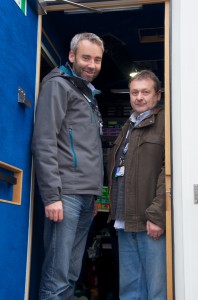 It also used an I-Movix Sprintcam hi-motion camera supplied by Editec, which can run at more than 2,000 frames per second, depending on the light conditions. For Sunday’s match it was used at 300fps. “In rugby, there are natural breaks in play where you can put high-speed stuff, so we can run it at up to 500fps,” said Mark Dennis, technical producer, Sunset+Vine, which does all the rugby and Premier League football production for BT Sport. It also occasionally uses a Sony FS-700, with an RF back, as an economical slo-mo PSC camera, which it intends using for the return match between Leinster and Harlequins at the Aviva in Dublin this Saturday evening.

It also used a 4K wide camera, which it calls the BT Owl, to cover the pitch. “We can zoom in to do analysis in the studio,” explained Dennis. However, it isn’t so useful for match coverage, as “you can’t rack for the whole area, you have to rack for specific places.”

BT Sport also has three LiveU backpacks for football and rugby, and often uses them on an ENG (Panasonic P2) camera to do colour shots around the grounds, particularly abroad (or for its Rugby Tonight show), but didn’t on this match because it was a studio match.

The Television Match Official was seated at the back of the main production gallery, covered by an Iconix camera. The VT area in the OB had four EVS machines, with eight replay lines, plus an EVS IP Director to clip and collate all the highlights packages, with Sony OLED monitoring throughout, and Telex talkback. Alston Elliot (Aegraphics) took care of the lower thirds, scores and timing.

“All the trucks in the Telegenic fleet have a fairly standard configuration, so it doesn’t matter which truck you turn up with,” said Telegenic unit manager, Graham Robson. The 4K truck has a Miranda Nvision 8500 router, while some of its other OBs run Evertz, but all the trucks use the VSM control interface, which can run either of them, so they all have a familiar layout.

BT provided its own outgoing channels on fibre to BT Tower, and BT Sport’s production partner for rugby, Sunset+Vine, provided four outgoing circuits: the main BT Sport programme; a clean feed, with no graphics; the world feed, with no BT-specific graphics or commentary; and a BT iso feed, for clips for the big screens or presenter analysis. There were also four 4-wire comms connections to the studio, “for engineering, production, mix minus and presenters, and VT, so the VT guys can talk independently,” said Dennis.

As BT was covering two games on Sunday, its main presenters (Craig Doyle, Brian O’Driscoll and Lawrence Dallaglio) were in iCity, BT’s London studios in the former Olympic Broadcast Centre. Otherwise, all presenting is done at the ground.

A lot of what Daniel Hudson, the match director on Sunday, deals with is meeting the wishes of the commentary team. “My job is to tell the story of the game, with the commentators,” in particular talking with the co-commentators, who ask for specific replays, angles or statistics, they want to talk about, he said. 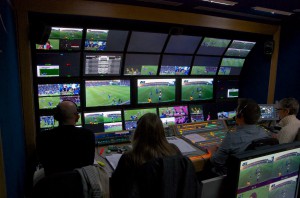 Taking the throw in: Inside Telegenic’s T25 production gallery

BT is aiming for a “more relaxed, informal style,” than Sky for rugby, such as doing pitch walks with players before the game. However, not all teams, or players, have been persuaded yet to do these. “It’s a matter of building up trust,” he added. Hudson, who also directs Rugby Tonight, said he has “loads of mates who love rugby, and we want to make it as accessible to fans as possible.” This includes getting a team in to the large iCity studio (the biggest in Europe), where there is a pitch and posts, to demonstrate moves. “We’re trying to promote rugby as a great game,” he explained.

The commentary team is a key part of the presentation. On Sunday, these were Nick Mullins, with co-commentators Matt Dawson, the former England and Lions scrum-half, and prop David Flatman, who played for England and Bath up to two years ago, who spoke about how much work goes into preparing for every game, including training ground visits.

“Because you’re going from game to game, there needs to be an element of bespoke preparation, looking at the idiosyncrasies of certain players and how different teams play,” said Dawson. “But, the more you do, the easier it gets.”

He pointed out that “the players are integral to the broadcast. We want the BT broadcast to have the players on side.”

“You’ve got to temper it between not being too cosy, and not crucifying them. If you are going to see Leinster train on the Monday morning, you’ve got to be able to justify what you say,” added Mullins. “You get information because you have access to them. You’ve got to deal with those players on a week-to-week basis.” Although Flatman said: “If there are criticisms to make, we make them,” he admitted that “I’d rather say nice things.” Both he and Dawson have been confronted by players demanding explanations for what they have said. 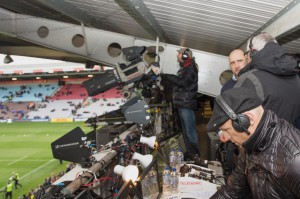 The BT Sport commentary team: Dawson makes notes (front) as Flatman talks to Mullins behind him

“We work in a minority sport that is very complicated,” added Mullins. On the BBC, for a major international, perhaps 9.5 of 10 million viewers “won’t know a great deal about the game.” On Sky or BT Sport at least viewers won’t be watching by chance. “We’re talking to people who know the game, but, like all of us, won’t know everything about it.”

“We’re reasonably current [with the game], but not at the cutting edge, so we need to maintain that access,” to coaches and players, added Flatman, although it also helps that BT Sport send both co-commentators detailed stats and player information in the run up to the game.