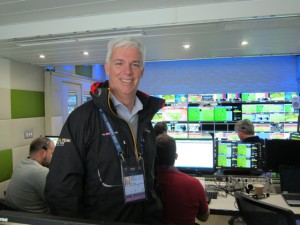 BSkyB’s presence at the Champions League Final may not have found them in the role of host broadcaster for the HD broadcast (something they have done four times, including the last time it was held at Wembley Stadium two years ago) but they assisted ITV’s 3D feed and, honestly, with a very busy weekend that included a big boxing match from the O2, the Monaco Grand Prix, and a bit of rugby, the team definitely didn’t mind the change of pace.

It also gave the team the chance to focus on the launch of Sky Sports 360, a new interactive app that gave Sky Sports fans a chance to see up to 20 different camera angles for the biggest plays of the night.

The launch of Sky Sports 360 this weekend was the culmination of works of work with EVS as Sky Sports looked to find the best workflow and also how best to fold it into its existing offerings.

“The technology is well defined so we wanted to figure out how to integrate it into our own football app and also explore what it can offer to us rather than building straight clips from the EVS servers in the OB,” says Keith Lane, director of operations, Sky Sports. 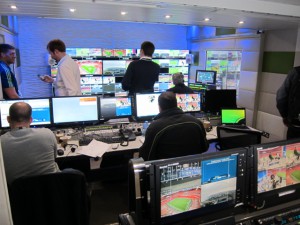 The Visions Atlantic production area has the feel of a high-end hotel, minus the pulsating lounge music. But the style does not take away from the technical firepower.

One of the goals of earlier tests was to decide whether it would be easier to have the C-Cast editorial presence working inside the NEP Visions Atlantic production truck or at the Sky headquarters in nearby Osterley. The decision was made to have the majority of work taking part in Osterley.

“We wanted to offer content that might not be aired on the main show, in addition to the multicamera angles,” adds Lane. The goal was to make sure that additional pieces of content, like player arrivals or interviews, could be clipped up and available in a separate playlist for the C-Cast operator.

“With more content you can make it more of a program and add more value,” adds Lane.

Moving forward Sky Sports 360 forward will really depend heavily on the amount of data connectivity between the venue and Osterley as there is a push and pull of low-resolution and high-resolution clips. For a venue like Wembley Stadium that level of connectivity is not an issue. But for other smaller stadiums or golf courses that sort of connection could be an issue, limiting the ability to transfer content as needed. And then there are the rights issues.

The NEP Visions Atlantic OB unit was home base for the production, complete with its unique styling that includes windows.

“Why make the OB unit a black hole?,”  says Lane of an OB production environment that typically has all of the comfortable feel of walking into a nightclub in broad daylight. “With the windows the can see the day go by in winter rather than going into the OB unit in the dark and coming out in the dark. It does make a difference.”

BSkyB had eight unilateral cameras for its coverage of the Champions League Final and also brought in a large number of individual camera feeds from the ITV host production so that they had the necessary resources to produce the Sky Sports 360 coverage. There larger studio was also the envy of other broadcasters but a requirement as a large touchscreen monitor running Piero and Hego software was on site for analysis.

BSkyB also helped handle ITV’s production of the 3D host feed. Robin Broomfield, Sky Sports, 3D, operations and development manager, was on hand to oversee the 3D production that operated out of Telegenic’s T21 and T23 OB units. With 12 cameras, including two RF cameras, the production was as big as the 3D production two years ago, the last time it was help at Wembley Stadium and when Sky Sports was the host.

“We have a bit more space even with the bigger host production so we could put more hardware out,” says Broomfield. Typical Sky 3D football matches have been produced using only seven 3D rigs.

The match coverage was not the big news for Sky Sports 3D on Saturday as earlier in the day the channel’s two-hour Saturday morning live weekly talk show was produced from inside Sky Studios with only camera racking andonvergence taking place in the OB unit.

“we moved the notch a little more so we can do more entertainment and live studio shows,” says Broomfield. “And in theory it is an easier workflow as most of the equipment like the vision mixer is 3D capable. The only thing missing are 3D monitors in the studio galleries.”