Every Champions League final tests the mettle of a national broadcaster who gets to play the role of host and this weekend’s final puts Portugal’s Sport TV  in the spotlight as Alvaro Cabral, host broadcast project leader for the final and a team of more than 220 are working hard to make sure not only a multilateral host feed is produced properly but that more than 20 visiting broadcasters have their unilateral needs met. 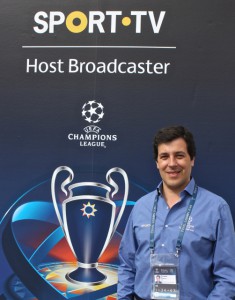 “We started preparation in September and from then until now there have been huge hours invested into the layout of the compound, camera plans, the mixed zone, the flash area, and more,” says Cabral.

The match production will include 33 cameras as well as a helicopter shot, a Spidercam for aerials inside the stadium, two ultra slo-mo units, various minicams, goalcams, and another camera capturing an external beauty shot. There will also be commentary in three languages for the Dolby audio signal: Portugese, Spanish, and English.

MediaLuso Portugal’s HD23 and HD24 twin OB units are home to the host broadcast feed production team with HD23 operating as a backup in case of equipment failure within HD24. The trucks are outfitted with Grass Valley LDK8000 cameras and a Snell Kahuna vision mixer with 64 channels as well as EVS XT2 replay servers. A Euphonix System Five B audio console and an RTS Adam intercom system are also included.

Cabral says the experience has been like getting a master’s degree in a few months.

“I can’t say in one word what they experience is like but it’s a new world with tons and tons of information,” he adds.

Cabral and the team are well versed in working at Estádio do Sport Lisboa e Benfica and while pre-cabling is available to the host broadcaster there simply isn’t enough to meet all the needs of the unilateral broadcasters. 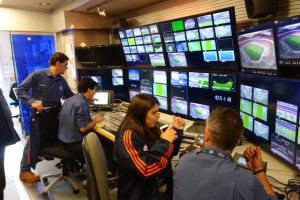 The production team from Sportv puts the final touches on the vision mixer for tomorrow’s big match.

“They will lay out about 50 kilometers of cable and between all the broadcasters there are more than 250 cameras in use,” adds Cabral. The three broadcasters with the biggest presence are Spain’s TVE, Fox Sports, and beINSports.

“During a regular Champions League match here we may have four or five visiting broadcasters but here there are more than 20 so the scale is much larger,” adds Cabral. “There are also up to 80 trucks in the compound.”

The presence of the broadcasters inside the stadium during the match will include 16 pitch side positions as well as four pitch-view studios and nine tribune platforms.