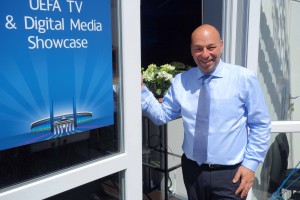 Olivier Gaches: “What used to be in the Future Zone is now here, and it’s real”

The Champions League Final in Berlin saw the final test showcase for UEFA’s Next Generation Services (NGS) concept, with its partners deltatre and the EBU, ahead of launch at the UEFA Super cup in Tbilisi Georgia on 11 August and then full deployment for the next three year Champions League cycle starting with the 2015-2016 season of matches.

Next Generation Services involves a new digital component with content in the cloud and all content available as turnkey services; and a broadcast piece with content delivered to a new NGS EBU UEFA Box. Broadcasters will have access to a wider selection of clips and content from a selected number of feeds for exploitation across second screen digital platforms. UEFA will also be providing broadcasters with an enhanced graphics, data and statistics service, and deploying a new audio watermarking mechanism embedded into the multilateral world feed.

The biggest challenges facing the partners have involved how to deliver NGS across 146 games ‘from Arsenal to Zenit’, and how to do so eight times in parallel for each Match Day with no central IBC to handle connectivity, control and distribution.

At the UEFA Digital TV & Digital Media Showcase area in the TV Compound on Final Match Day Minus One, an ebullient UEFA Digital Media Solutions Manager Olivier Gaches told SVG Europe, “what used to be in the Future Zone is now here, and it’s real. For the next UCL cycle we are investing in a new piece of technology for our TV graphics van, powered by deltatre, in order to do more advanced content. For that we receive data from spotters and a tracking solution from the venue for match data in order to power the on-air graphics and also our Content Factory.

“What’s new, on top of that, is that we’re going to ingest 12 camera feeds. From these feeds we’re going to have a remote production, where we can see the multi and pick up key match events. When we see a goal we go into the van, where there are 12 camera feeds, and we keep 12 different camera angles for the event. Then we generate a proxy version that goes to the editorial guys to pick up the event. So, the first thing we are doing is multi-angle clips,” said Gaches.

“The second thing we are doing, on top of the 12 feeds now we will now grab the audio feed from the HD truck. We embed this with audio tags and we re-ingest the audio signal into the truck to mix it in channel 7 and 8, and then uplink that as multilateral feeds available to all broadcasters. So for all Champions League matches we will produce multilateral coverage with audio watermarks.

“On top of that,” said Gaches, “we need isolated camera streams as well. Out of the 12 camera feeds we are going to stream three in order to have that content available for tablets, phones or PC.

“How do we bring this content back to UEFA central Content Factory? We went to the EBU and asked them, out of your satellite transmission could you please provide us with 50 Mbps bandwidth dedicated for file transfer. They developed the technology in the mux in order to have the live coverage and this 50 Mbps bandwidth where we push multi-angle clips and live streaming. That’s on top of the satellite, and then they developed a box, feeding into a receiver, in order to store all these assets.

That’s super cool,” said Gaches, “because we are now able to do coverage from Baku to Wembley; no matter where the stadium is we are going to have consistent coverage.

“In order to finance all this, we said to the EBU, why not have a receive box that can be provided to the broadcasters in order for them to have all this content directly into their premises in a near-live manner? We have boxes to power the UEFA Content Factory and Livex [UEFA clips archive], and then there is an option for the broadcasters to buy the box in order to receive content.

“So, live broadcast-quality multi-angle clips from the venue; and because we have our flagship Livex 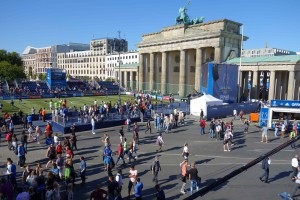 as a browser-based clips distribution platform, if you have a box you can access that legacy broadcast quality content. Livex is an on-demand solution; or, you can subscribe and we’ll push some of this content out to you. You need to have a strong editorial willingness in order to use this content; you need to have your creative team with you to get the best out of it,” he suggested.

“The Super Cup in Tbilisi in August will be the first match, then the qualifiers, and then onto Match Day One of Champions League 2015-2016 season. We are empowering the TV graphics van into a multi-service van. We now have no issue, whether we’re in Baku, Berlin or Wembley; we have the van, we have the SNG, we have our transmission ready — with our partners deltratre and EBU,” said Gaches.

Gilles Mas, deltatre, World Football Unit & Digital Host Broadcast Director, told SVG Europe, “we are kicking off for Super Cup in August, so this is the final rehearsal. There are many challenges, which we have worked on with our friends from the EBU. It is a heavy set-up to orchestrate and for all this collaboration to happen. But I think we are now confident and we all know each other well enough so that if there’s a crisis we can call each other! We are ready,” said Mas.

“We’ve been pushing the services to broadcasters worldwide for six months in testing; there is high interest and good take up. We’re getting there, both from an interest perspective by the broadcasters and at a project level as well. The vans are all equipped now; we had to upgrade them all with digital ingest capability, encoding and so on.

“The complexity of Champions League Match Day, with eight venues in parallel, IP over satellite … it’s not as if we have fibres everywhere. As we want to be standalone we are working with the EBU; on top of the SNG they provide us with IP capability over satellite so that we can be independent,” said Mas.

“We plug our van into the OB production, we do the digital creation, and then we uplink everything through them [the EBU] using IP bandwidth over satellite. And then we downlink into the networks for repurposing. That, over eight games, with latency and so on, is a technical challenge.

“In parallel to the clip generation process we have what we call a central resource system.” He said. “In every stadium we have two spotters who are logging action, plus the player-tracking system; all this is compiled by the van into data feeds and those data feeds are re-injected as metadata for the clips.

“So what we are following is more or less the timecode of the game, and when a clip is created it inherits automatically all the metadata that is linked to that event. The metadata enrichment is not done manually; it’s actually inherited from the central resource system we deploy.

“EVS is playing a big role,” said Mas. “We are using C-Cast, and the partner line-up is constant. This [NGS] has never been done before on such a scale, on such an operational model with eight venues and connectivity over satellite. We are creating clips in broadcast and digital quality, and handing the broadcast quality to the EBU so they can deliver it directly to the box — and then we are populating all those other services ourselves. This production chain has never been done before, never to such a scale,” said Mas.