Tonight’s Champions League Final will once again put a local broadcast production team to the test and this year it is up to a 220-person team from German public broadcaster ZDF to make sure the world’s football fans enjoy the match in the best possible way. 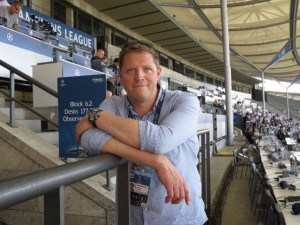 Eckhard Gödickemeier, ZDF, production manager, leads the team that has been hard at work on the project for more than 18 months. By the time kick off begins 20:45 local time the production plan will have grown to include a massive compound with more than 10 OB units for the host feeds, 90 vehicles for the unilateral feeds, office trailers, a technology pavilion from UEFA, and a Technical Operations Center that handles all signal provisioning for rights holders thanks to a massive 1,028×1,028 router.

The match will be played at Berlin’s Olympic Stadium, a stadium whose founding stones were laid long ago but is still ready for today’s broadcast needs thanks to a refurbishment for the 2006 World Cup.

“It’s brand new on the inside and from my point of view is one of the best refurbishments,” says Gödickemeier. “There is pre-cabling and the stadium is huge and that is the major problem as the cable runs are really long.”

The compound itself is located only a few steps from the stadium with cable running from the compound to the stadium via a cable bridge. Along with the cabling challenge was simply the need to map out who and what goes where in the compound.

“By the last stage we had more done more than 20 compound layouts and it was like playing Tetris,” Gödickemeier says. “But we were able to start early compared to others who didn’t have that big of a time advantage. Our first planning started before the last final [in Lisbon last May].”

Plazamedia is ZDF’s production partner and TVN will be providing the OB units for the main host feed. The three entities have been working together since the beginning of the 2015 football season to make sure the production team is ready for the big match tonight.

“We have also had the same camera and EVS crews working together so they are warmed up,” adds Gödickemeier.

Along with the OB units ZDF is also providing a Technical Operations Center that it has used on previous events, like Winter Sports, where the broadcaster plays host.

“We have a specialized team of 12 to 14 people that do the signal provisioning and master control which is great,” explains Gödickemeier. “We have all the equipment in house and all in boxes so we can set it up easily.

The production will make use of 40 cameras and 14 EVS replay servers to deliver what is, for all intents and purposes, a World Cup level production.

“We learned from our colleagues who have done this before and asked them how did you handle innovation?,” says Gödickemeier. “But the aim here is not put in big innovations; the aim is to deliver the production properly. Therefore we really don’t care about innovation.”

The stadium does have some quirks. For example the area behind the goals is not steep enough to allow for a manned behind-the-goal camera to simply be set up and cabled. As a result a crane camera will be used in order to properly see the goal line.

Also look for shots captured from a small Sony HDC-P1 camera has been mounted in front of the VIP area.

“It is a very small remote HD professional camera that will shoot lower angles for slow-motion replay and analysis,” adds. Also a small Sony HDC-P1 camera has been mounted in front of the VIP area.

“The camera positions are easy because the stadium has a lot of space,” says Gödickemeier.