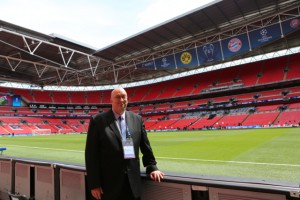 The ratings are still coming in for the Champions League Final held this weekend at Wembley Stadium (although ZDF Germany, not surprisingly, is posting record numbers of 21.6 million) but it appears that all the hardwork by ITV on both the unilateral and host feeds (including a 3D feed) has paid off with a production that hit all the high notes.

NEP Visions Gemini was at the centre of the production of the ITV host feed while OB units from Telegenic handled 3D coverage and Arena OB units were in charge of ITV’s unilateral feed. The Gemini truck is also on hand for the 27 May Championship Play-off Final before Arena returns for a friendly match between England and the Republic of Ireland on 29 May.

Roger Pearce, ITV,  technical director, sport, was in good spirits on the afternoon of match day. More than 44 kilometers of cable were laid in to connect cameras and the host compound to the rights holder compound. And outside of a cold and rainy rehearsal day on Friday everything went off as planned. 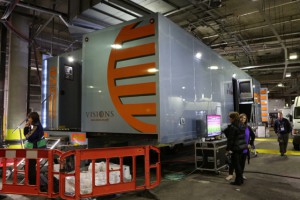 ITV worked closely with a number of vendors in the next two weeks on a production that will include 35 cameras for a 2D production and 12 for a 3D show. Those vendors include Telegenic for the 3D production, Presteigne Charter for RF camera needs, Fletcher for UltraMotion cameras, ACS for the PoleCam and SmartCam cameras behind the goals, and SpiderCam, the provider of the cable camera system overhead. Sound Credit will also be on hand installing more than 100 commentary positions and Arena Television will provide aerial shots from a helicopter. And last but not least, Film and TV will be on hand for power needs while EBU will handle international distribution feeds. 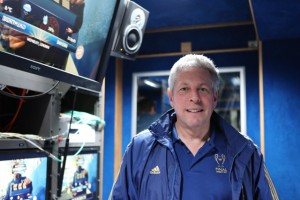 The most challenging part of having a final with as much international interest as the Champions League in Wembley Stadium is that the main compound is not large enough to accommodate all of the cabins and OB units required. So while the host compound was tucked nicely within the stadium the 11 other broadcasters were located in the green parking lot. That required a massive fibre infrastructure to be put in place so the two locations are connected not only to each other but also to the eight pitch-view studios that are being installed inside the stadium.

“The last time we hosted the Champions League Final was 2004 in Manchester and it has doubled in size since then,” says Pearce.