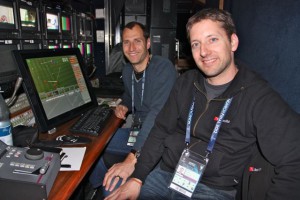 Liberovision’s Highlight 5, the latest version of the company’s 3D graphical play-analysis tool, will makes its official live sport debut tonight for Fox Sports US. The system last night was used during match-preview coverage on Fox Soccer Channel. The system offers a number of new features, and Liberovision CEO Stephan Würmlin Stadler and operator Remo Ziegler were on hand to build the graphics elements out of Vision’s HD4 OB unit.

Among the newest features that show the most promise is the ability to create a panoramic image of the field by stitching different camera views together. Doing that work before the match begins gives the operator maximum flexibility when trying to analyse a play and the players’ relationship to each other on the pitch.

“You want to build that panoramic stitch as close to the start of the game as possible,” says Stadler of the need to have fans in the stands to enhance the impact.

The system will also be used tonight the match to provide halftime and post-game analysis. Stadler says the primary cameras that will be used tonight for building analysis of plays will be the 18-yard cameras and the Spidercam as well as Steadicam units and cameras behind the goal. Together, the cameras can help build graphical analysis that swings around a play and offers a different look and feel compared to systems that typically rely only on high camera positions.

The new Virtual Run feature could also make its debut tonight, allowing one player to be in motion during the analysis while the other players are stationary.

“On a give and go, you really show how the ball and player interact,” adds Stadler.