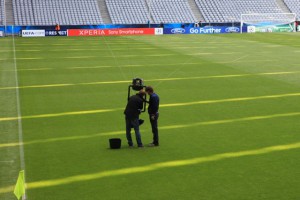 The Spidercam that will be used to cover the Champions League Final gets some final tweaks.

It was a little more than three weeks ago when FC Bayern München defeated Real Madrid to qualify for the final of the Champions League that Sky Deutschland realised it would need to increase the domestic production efforts. “We normally would have six cameras for a domestic Champions League Final,” says Allesandro Reitano, Sky Deutschland, head of sports production. “But we decided that, if Bayern made the Final, we would build out the domestic show. So we have a total of 12 unilateral cameras, and we will begin broadcasting at 1800 and stay on for six hours.”

Part of those expanded efforts concern the pregame, halftime, and postgame analysis. Reitano says it has changed to be an American-style show, with a roundtable of five experts for the pregame, halftime, and postgame coverage, including a former referee, something Fox Sports in the U.S. has done for its American football coverage, with the referee giving insights into how the referees on the field approach critical decisions.

Reitano says a growing dialogue between Sky Deutschland and their US counterparts at Fox Sports in Los Angeles, a broadcaster well versed in having a large number of analysts and experts on-air for a big event, helped the network become comfortable with the approach.

“We have a new senior vice president for sports, and he is very much a fan of the Fox Sports broadcasts, and we had a very good meeting in Los Angeles about what to do,” says Reitano. “And since the last Bundesliga season, we changed our style to be more American with a pitch-side table with analysts, and our graphical presentation is totally different with more graphics and sound effects. And the viewers like it because we needed to have differentiation because, in Germany, all the broadcasters have the same signals. So the subscriber should notice something that is only on Sky because it is a premium product that they pay for.”