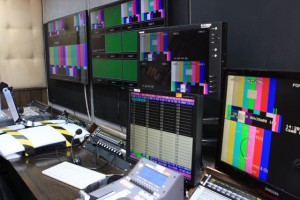 A temporary wall is allowing two networks to operate from the expando area in NEP1.

Fox Sports US is once again at the Champions League final, but this year with a twist as the production team is overseeing unilateral feeds for Fox Sports, Fox Sports Soccer Channel, Fox Deportes, and Fox Sports Latin America. “Every year, this gets bigger for us, and it’s because, unlike with the World Cup or Olympics, we, and 20 other broadcasters, land on the ground and built it up over a week,” says Mike Davies, Fox Sports, Vice President of engineering.

While Fox Sports and Fox Soccer Channel operations will operate together, the two Spanish-language networks have completely separate operation, with their own commentary positions, studios, and staffs operating in the Visions production unit. 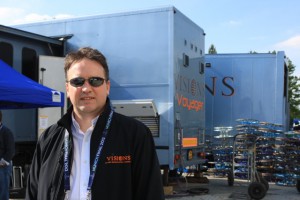 “With four channels and the size of the rigging and engineering departments, this is probably the biggest unilateral operation here [in Munich],” says Brian Clark, NEP Visions, Commercial and Technical Projects Director. “Combined, we have so much going on.”

Clark says that the outboard Grass Valley Kalypso switcher was taken from the main console so that both networks have access to  a switcher for mixing pregame, postgame, and halftime shows using three cameras each and an EVS unit.

The Fox Sports production will feature six unilateral camera feeds as well as 18 feeds that will be taken from the Sky Deutschland production. Game coverage will rely completely on the international feed.

“By the time the game starts, we are assembling packages for the halftime and postgame coverage,” says Davies.