The Fox Sports family of networks are once again on hand for a Champions League Final and for the fifth straight year OB provider Visions is supporting the efforts as all have come together in Lisbon for today’s match between Real Madrid and Athletico Madrid. “What we’re doing is leveraging several 21st Century Fox properties into one big production as there are four separate networks here: Fox broadcast and FS1, Fox Deportes, and then the Fox Sports Latin America northern cone and southern cone networks,” says Mike Davies, Fox Sports, SVP of production and operations. 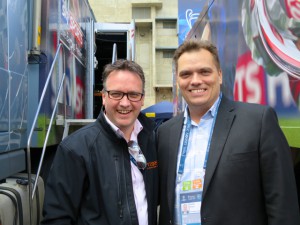 Brian Clark of Visions (left) and Mike Davis of Fox Sports on hand for the Champions League Final which will be held later today.

Visions HDR3, which has plenty of football experience working on Premier League football in the UK, is on hand as a production and tape area while Visions HD1 is once again home to the Latin American networks and Fox Deportes. A temporary wall in the control room of HD1 allows for the vision mixer to be split so that the Latin American networks can operate off of the front bench while Fox Deportes operates off of the back bench.

“This is the fifth Champions League Final Visions has done for us and they are great to work with because they also support BSkyB so there are some efficiencies for both of us as we just need one tender for both channels,” says Davies. “It’s a very happy marriage.”

Each of the four Fox networks have their own commentary positions and also a presence designed to give viewers more than just the game.

“We always want the commentators here and then there is a pre-game presence and then a presence at the pitch and doing interviews and while we don’t need all of the resources of a big truck it’s the best bucket,” adds Davies.

The biggest change this year is that Fox Sports will leverage the studio in Los Angeles rather than have a studio on site. With two top La Liga teams battling it out the demand from Spanish-language networks for studios was high and quickly outpaced available studio space. 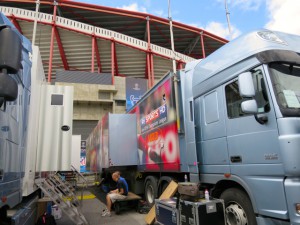 Visions has two OB vehicles on hand to support Fox Sports as well as Atlantis to support BSkyB’s needs.

The Latin American networks do have a tribune position for an open air studio but our studio in Los Angeles will be used to wrap around inserts from here in Lisbon,” explains Davies. “Graphics and everything else will also be inserted back at home.”

The past five years have given Davies and the production team a chance to see how a wide variety of broadcasters approach the role of host broadcaster, from ITV in London last year to Sky Deutschland in Munich the year before to Mediaset in Madrid, and now MediaPro in Portugal.

“It helps to see what individual hosts have done and to see trends in terms of live coverage as well as so many different studios,” says Davies. “And then we get to see the production trucks and different concepts for building trucks and layout. We can see equipment in action instead of on a convention floor.”