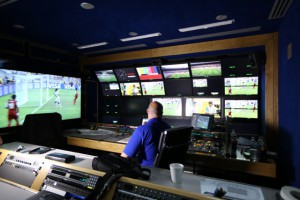 Chris Facer-Floate, vision mixer for the 4K tests at the Confederations Cup, inside the main production area in Telegenic T25.

The 4K format is still very much in its embryonic stage when it comes to live sports production. But Sony, Telegenic, HBS, and FIFA TV have shown how much growth can take place in a short time, as the productions of three Confederations Cup matches at Mineirao Stadium in Belo Horizonte showed great improvements over tests in the UK in early May.

“We are showing that we can take a 4K operation into a true live production environment and are answering questions around things like depth of field, data handling, recording, and production values,” says Mark Grinyer, Sony Professionals Europe, World Cup 2014 programme manager. “There are a whole raft of questions we are answering so that we can offer FIFA the option to take 4K into the 2014 World Cup. But that decision is for FIFA and the broadcasters.”

The quality of the 4K experience has surprised those who are here as it was only a few months back that a wide range of issues seemed to require long-term solutions that would be solved much later than today’s Confederations Cup semi-final match between Brazil and Uruguay. But through hard work, early trials in the UK with Sky that identified a number of problems, and a lot of interaction between companies like Sony and Fujinon, some of the biggest obstacles have been overcome. “This is the first multi-camera production that was in 4K and was run like an HD production,” says Grinyer.

Grinyer says the work accomplished here began in February when Sony and FIFA TV began discussing the possibility of a 4K trial. Telegenic became involved as it had already ordered a 4K OB unit to be assembled by Sony. Then the hard work began of getting the Telegenic’s T25 unit built on time, working with SOS Global Express to ship it across the Atlantic to Brazil, and getting it into position at the stadium in time for the first match on 17 June between Tahiti and Nigeria. HBS provided a producer and director while Telegenic provided the rest of the production team. 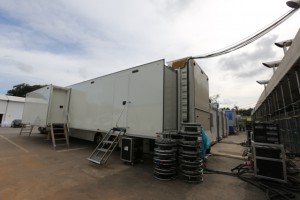 The core production involves nine cameras, including seven Sony F55 4K cameras alongside two HD cameras that are upconverted, and a mix of high-end Fujinon digital cinema lenses, mid-range Fujinon Cabrio, and broadcast lenses. There was a desperate need to be able to fit traditional broadcast lenses designed for cameras with 2/3-inch sensors onto 4K cinema cameras that have a single full-frame sensor. And there was also a need to bring traditional broadcast camera control functions to cinema lenses.

Two new products here — a converter that allows Fujinon broadcast lenses to connect to Sony digital cinema cameras and the use of the Sony MPU4000 processor — do much to solve those issues. Grinyer says the lens converter is not compatible with all 2/3-inch lenses on the market (it currently only works with Fujinon lenses but expect other manufacturers to be on board in the future) and there are some lens aberrations that lessen the quality versus the use of a cinematic lens.

But the ability for OB companies and rental companies to leverage existing broadcast lenses within a 4K workflow could be a boon to those who feared the need to buy expensive digital cinema lenses.

The Sony MPU4000 is also important as each camera is connected to an MPU4000 in the OB unit. The RAW 4K camera signals are then sent through the processing unit that splits the 4K signal into four HD signals that can be transported over separate 3Gb signals. It also allows for the camera control units within the truck to control the camera as if it is an HD camera and for camera operators to rack focus and zoom as if they were using a standard broadcast lens.

“As far as CCU is concerned it is talking to a standard camera as the processing that is done in the camera head for HD is done in the MPU4000,” adds Grinyer. “The signal can be routed through the Miranda router as if it were four locked HD signals [with 3Gbps over each HD signal]. So when the signals pass into the EVS or SR record decks they take up four BNC connectors.”

Turning one 4K signal into the equivalent of four HD streams in order to move it through a truck highlights one of the still-to-be-solved challenges. For example, the two four-in and four-out EVS XT[3] servers in the Telegenic truck can basically record and play out only one 4K signal. “Behind those two EVS servers are four Sony SR decks with three for archiving and one is also being used for slow-motion replay,” adds Grinyer.

The production experience has also provided a lot of answers about how to best produce a live event in 4K. Upconversion of HD material to 4K, for example, is a viable alternative for camera positions that capture a lot of close up shots. “But stadium shots are not able to upconverted as you can definitely see the steps in resolution,” says Grinyer.

The use of traditional broadcast lenses in 4K was also proved out, although Grinyer says they should not be used all the time. “They look surprisingly good but for money shots you still want to use 4K glass.”

Also getting a workout are Sony OLED viewfinders and focus-assist technologies, important means to ensure camera people are able to maintain focus while watching smaller screens that can make it difficult to visually maintain focus on images that, ultimately, will be viewed on TV sets up to 84 inches diagonal.

The three test matches were not broadcast or delivered outside of the venue as that exercise, while possible, was not the point, according to those involved (namely, that any difficult efforts today would not be applicable to distribution technologies in another year). The point here was to prove the viability of 4K production for next year’s main event: the 2014 World Cup.

There is still much to be done to see if that will happen, including a business side that involves partners like FIFA, Sony, and the World Cup rights holders figuring out if the 2014 World Cup will continue a streak of World Cup firsts that began in 2006 when it went all HD and in 2010 with the high-profile launch of 3D.

“Unlike 3D, where there were only bits and pieces of production equipment in the market, 4K exists in the high-end market and we can tap into the pool of equipment that is in use in the cinema world,” says Grinyer.

Between now and next June the industry can expect many additional 4K trials. The question now is: will the World Cup 2014 be a watershed moment for 4K? Stay tuned.