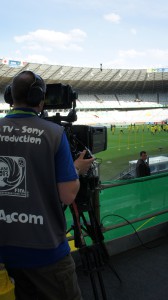 The Confederations Cup gave Sony and HBS a chance to shake out new HD workflows.

The massive effort required by a nation to host a FIFA World Cup makes an event like the Confederations Cup held during the past three weeks an important tune up. It gives FIFA and related entities a chance to “kick the tires” of the venues and other facilities and identify any major and minor issues that need to be addressed in the final months.

For the FIFA TV and HBS broadcast production teams, the latter who handles all TV operations and logistics on behalf of FIFA TV, it is an important chance to try out new workflows and technologies, get used to working with new faces and crew, and figure out how camera positions may need to be adjusted for the main event next June and July.

This year’s Confederations Cup was also important as it marked the beginning of a new production relationship between HBS and Sony as Sony will provide technical facilities at all 12 venues next year as well as 300 personnel. 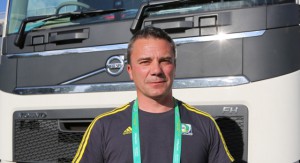 Sony’s Mark Grinyer played a key part in both the HD and 4K broadcasts of the Confederations Cup in Brazil.

“It’s one of the biggest service contracts Sony has ever done,” says Mark Grinyer, Sony Europe, director of the 2014 World Cup programme.

The fruits of the hard work between the Sony team, HBS, numerous equipment vendors, German-based system integrator Sono, and Beligum-based production service provider Outside Broadcast (one of four providers that will offer additional technical support at three venues each next year) were on display in Belo Horizonte at Mineirao Stadium during the Confederations Cup. All entities worked together to build out a fully functional prototype of the Technical Operations area that will be located at each of the 12 stadiums next year.

The core of the facilities are a series of broadcast cabins that provide ample space and, more importantly, identical facilities and workspaces from one stadium to the next. 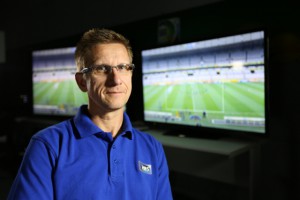 Jörg Sander, HBS, CTO, says the use of cabins is a necessity given the size of coverage.

Jörg Sander, HBS, CTO, says the beauty of the set up is the working conditions are much better than in a truck and they are also identical from one venue to the next.

“With 37 cameras and 16 EVS operators we just cannot fit into a truck anymore,” he says. “So this is a demonstration of how the set-up will be next year and we can also test logistics, demonstrate it for the match directors, and look at the technical possibilities for next year.”

Sander says the operation next year will be very similar to this year’s Confederations Cup. One big change from 2010? Every venue will feature a Spidercam system capturing aerial shots.

“The changes will be minor,” he says of post-Confederations Cup adjustments. “The biggest challenge will be multiplying this times 12.”

There were three broadcasts from the stadium and each one gave a different production team that will be involved in next year’s World Cup, first an English team, then a French team, and then a German team, a chance to work in the facility and provide feedback on possible changes related to technology, camera positions, and workflow. 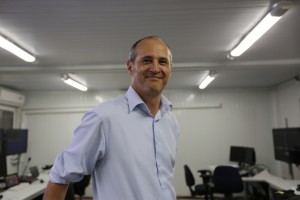 “The next step is to sit with the engineering team and have a debriefing where we make modifications,” says Dan Miodownik, HBS, director of production. “We will also sit down with the eight production teams and figure out how they will set themselves up and operate.”

The heart of the technical operations area is a 40-foot refrigerated unit that includes all of the camera control units, EVS XT[3] server infrastructure, intercoms, Harris and Sony routing control, network switching, and more. That unit is located next to two rows of cabins facing each other (one row has a second level) that measure about six meters deep and about 40 meters wide. The complete operation can be put together in a little under four days.

German system integrator Sono Studiotechnik has played an important part in making that quick construction possible as all equipment and racks are first configured and tested in Munich.

“They have worked on World Cups before and are a partner of ours on other projects,” says Grinyer of the Sony/Sono relationship.

Some of the equipment, like the EVS servers, the routers, and audio desks, has gone through the typical technology refresh cycle since the last World Cup. But the extensive use of touchscreen devices will be a new phenomenon at the World Cup.

“The touchscreen platform allows for things like camera control to be set up for each director with different, configurable scenarios,” adds Grinyer.

Master control is another area that will be quickly reconfigured depending on which production team is working in it. “They each have a subtly different way of planning cameras and calling shots,” says Grinyer. A Sony MVS8000 vision mixer sits at the center of that room with a Lawo audio desk located in an adjacent room. 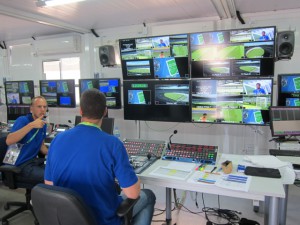 The replay area for Confederations Cup matches in Belo Horizonte.

The EVS area also has flexibility for different philosophies as up to 11 replay operators will cut clips on the XT[3] serves and producers will make highlight packages. But the French and German teams, for example, like to have a submix position for managing the clips.

And the EVS servers will also play a vital role in any second-screen experiences being designed for tablets and other devices.

“The XT[3] gives us much more flexibility in setting up with the production teams and it is also critical for the multi-angle viewer that is a more functional way to select additional content and feed it out,” adds Miodownik. “With 39 cameras recording 90 minutes of footage there is a lot of video that has real value. We need to figure out how to get that content out and the XT[3] and EVS server can do that.”

There is also another production area with a Sony MVS7000 vision mixer that allows for additional feeds that focus more specifically on each team to be produced and, if needed, operate as a backup facility. And finally there is an area for scoreboard production in the venue featuring a Sony MVS3000 vision mixer.

“There is layer upon layer of backup,” adds Grinyer.

A successful Confederations Cup production is behind everyone but there is still plenty of work to be done between now and World Cup 2014. And then there is the actual event itself, taking place in a country so vast that charter flights will be the primary means to move crews from one venue to the next and roadways and other services are still due for improvements.

“You cannot underestimate how challenging next year is going to be,” says Miodownik. “It is the perfect country for the sport and the spectacle but it will be difficult and we cannot plan enough or have enough resources. It will be a fantastic World Cup.”