Live from Docklands: F1H2O World Championship back in London after 33 years

Formula 1 powerboat racing returned to London for a Grand Prix last weekend for the first event in the capital in 33 years. The Union Internationale Motonautique (UIM) F1H2O World Championship, now in its 35th season, was back in London for a 54-lap race run on London’s Royal Victoria Dock. The water took its toll with six of the 17 starters failing to go the distance and retiring. 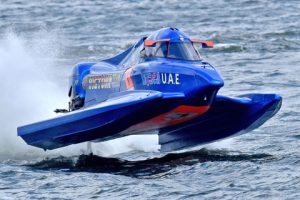 Gearhouse Broadcast provided the kit for the event, acting as host broadcaster for H2O’s production company partner, Case Productions. Gearhouse took over the supply of on-board cameras and the live drone when needed from an Italian company four years ago, and this is its second season as provider of full facilities.

Gearhouse provided all broadcast facilities for live distribution. This consisted of eight cameras (two RF), two Vislink on-baord waterproof cameras for the single-seater, hulled circuit boats, and at other Grand Prix’ but not in London due to the proximity of London City Airport next to the Royal Victoria Dock, a live drone.

The London Grand Prix, two of eight to run this year, went out over an international feed, live streamed to the internet for fans of F1H2O. Case Productions uses three commentators speaking English, Chinese and Arabic. Additionally, it is producing a 26 minute highlights clip, available the Friday after the event, which Case Productions provides for broadcasters. 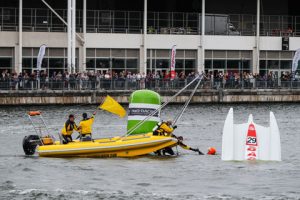 The event, which was shown on BT Sport here in the UK, is still a niche sport, said Nigel Quilter, charismatic media director at H2O Racing: “We’re a niche sport but we’re very pleased BT Sport has picked us up, so we’re in good company there. In China we’re on CCTV and Abu Dhabi Sports TV is here; they go to all our events. We go out to 24 different broadcasters across 72 countries, streamed live to those broadcasters who play it live or deferred, as well as a highlight show.”

The issue for Gearhouse and Case Productions in providing live footage of powerboat racing is the water itself; on-board cameras must be waterproof, and it must be accepted that sometimes they will be lost to the deep when boats roll or crash. Explained Mathieu Rocton, managing director, Gearhouse Broadcast (France): “Innovation is creating a waterproof lens that can deliver this footage. We use on-board cameras from Vislink and we designed special box for the transmitter. We have developed special equipment especially for this sport, which we have then used in other sports, such as the Tour de France à la voile.” 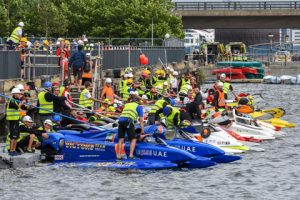 The teams get ready to race

Added Selim Kemahli from Case Productions: “One of our biggest problems is being on the water. Boats go over and you lose equipment, and who wants to pay for that? It’s not like a car which when it crashes, you can go and pick up the pieces. Here, it disappears and there’s water everywhere anyway.”

On why H2O chose to work with Gearhouse, Quilter noted: “It was time for H2O Racing to step up and find a company that could take its broadcasts forward. Gearhouse is that company, and it has a good relationship with our partners. The business we’re in of TV is changing so rapidly in what you can do with technology, cameras and the like. We needed a partner to help with that.”

When Gearhouse began supplying on-board camera to teams, the first issue is that none wanted them on their boats. Rocton told SVG Europe: “If you put something on that can come off or affect the aerodynamics of the boat, teams don’t want it. In the beginning no one wanted onboard cameras, then some winners had them onboard and now, everyone has them and it’s in the rules that they must do. We have to work closely with the teams on where we can place cameras and antennas, in or out of the cockpit. It all has to be agreed before the Grand Prix’ so teams can pre-drill the boats.” 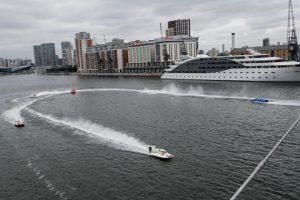 Paolo Pescatore, vice president for multiplay and media at research firm, CCS Insight, commented on what F1H2O could do next to move its broadcast approach forward: “You would expect the sport to have a niche and loyal following. With that in mind it should seek to engage more with this base by offering more immersive features such as 360 degree and virtual reality. And let’s not forget UHD 4K and even Dolby Atmos. However all of these features require a significant investment and this is the challenge a niche sport like F1H2O faces.

“For now it would be better off focussing on promoting the sport, raising the global appeal as well as generating revenue from this loyal following,” continued Pescatore. “There are plentiful untapped opportunities such as seeking to offer an OTT service. Arguably it should be leveraging the global appeal of F1 given the synergies; it’s noisy and very fast.”

Sweden’s Erik Stark delivered the ultimate performance to take a second career win with a sensational victory at the Grand Prix of London, round 2 of the UIM F1H2O World Championship.

The boats – the nine teams used two to three boats each from the qualifiers onwards – used a rolling start instead of the usual dead-engine start out of the dock. Stark led the 16 boats around the 1.72km three-pin circuit under a yellow caution flag for a couple of laps before the green flag was given to release them to race.

It was a pulsating race from start-to-finish with Maverick F1 Racing’s Stark surviving two prolonged yellow flag periods and restarts, the first when championship leader Shaun Torrente speared and destroyed a turn buoy forcing him to retire on lap 11, the second when the defending world champion Alex Carella barrel rolled out of the race on lap 36 of 54.

For a second time Stark held firm at the restart and was able to control the race with an uninterrupted run to the chequered flag to win by 3.34s from Chiappe with Morin following his team leader home. “It is always difficult to win but I felt that I had control of the race. But you never know. So many things can happen with the boat, the engine,” said Stark. “But I had good speed throughout and just hoped it would be enough and it was. I was able to manage the restarts pretty well and always felt I was in control.”

Despite a frustrating BRM Qualifying session and starting from 14th Marit Stromoy also put her first set of points on the board driving up through the field to finish in seventh ahead of Ahmed Al Hameli, with the race winners’ teammate Cedric Deguisne in ninth.

Round 3 of the UIM F1H2O World Championship, the Grand Prix of France takes place in Evian on 29 June to 1 July.