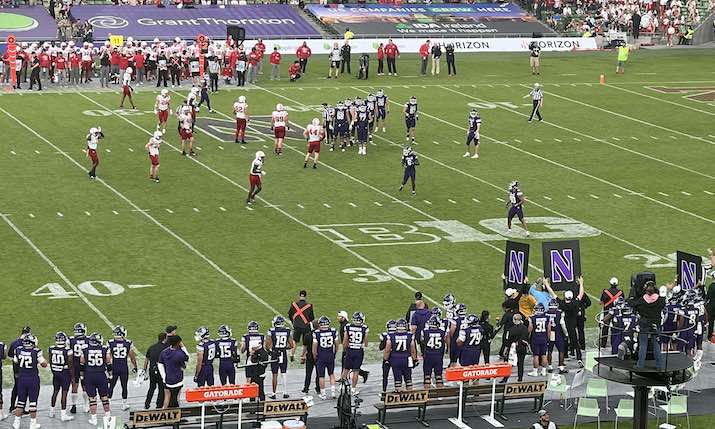 The National Collegiate Athletic Association (NCAA) Football Season officially began on Saturday 27 August as the University of Nebraska Cornhuskers and the Northwestern University Wildcats faced off at the Aviva Stadium in Dublin for the 2022 Aer Lingus College Football Classic. This was the first time in Ireland for both Big Ten teams, who partnered with Irish American Events (IAE) for the Week Zero game.

IAE first organised a fixture in Dublin in 2016, when Georgia Tech took on Boston College. A proposed meeting between Notre Dame and Navy for 2020 was scuppered by the pandemic, as was 2021’s game, which was to have been between Illinois and Nebraska in Dublin.

Saturday’s Season Opener was the first time Fox Sports and the Fox Sports App have broadcast and streamed a college game from Ireland, and the first time the team has undertaken a remote production at such a distance – with 16 fibre streams direct to the Fox hub at Pico Boulevard in Los Angeles and eight returning feeds to Dublin in under one second.

Fox sent a scaled-down crew to Dublin to augment the NEP Broadcast Services Ireland facilities provision on the ground, with match director, producer, on-air talent, graphics and some of the EVS replays all located in the LA production gallery.

It was also the first time a college game has been shot in Ireland in native 1080i 59.94, so that it appeared as if it was just another production anywhere within the United States.

When I landed in Dublin on Wednesday I had already gotten an email saying LA was seeing bars from NEP Connect. So right off the bat the video back and forth was happening. Sure, we had to do a little bit of work at our end to get some data for different things, but all in all it was a very good process.

A mix of Sony HDC-4300 Super Motions, HDC-3500 and HDC-2500 cameras covered the game, with one 4300 mounted on a Chapman cart running on the near sideline. The official replay service was provided by regular college football contractor DVSport, with SOS Global handling shipping.

“This is our first time doing a game in Ireland,” Brad Cheney, Fox Sports, VP field engineering & operations, tells SVG Europe. “We do the majority of our college football remotely, and so this just became another one of those games, especially with a lot of early season games for us back in the States. Considering the turnaround for our crews of people, it made a lot more sense to do it remotely.

“The only real challenge we found as we went into this broadcast was the distance between Dublin and LA, where we produced the game, and obviously making sure that in working with NEP Ireland we found the right camera crew and the right people to help us pull off a broadcast in a sport that happens only maybe a couple of times a year in Ireland.” 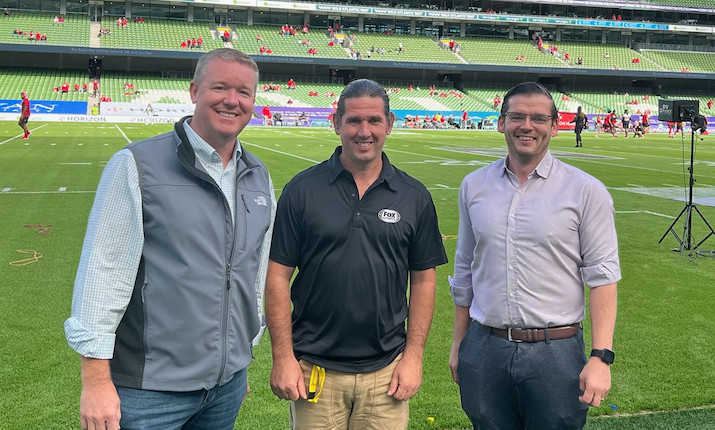 “The crew was mainly Irish. We brought over two camera operators, two audio people and one replay person to help support and teach the coverage of American football,” says Cheney.

“We haven’t really encountered any issues at all. I think the beneficial thing is working with a group of people at NEP with whom we feel very confident to be able to produce the show remotely this way, with the technical expertise of NEP Ireland and NEP Connect to make this happen, involving multiple Gigs of bandwidth from Dublin through the UK and across the pond to New York where it then hopped across to Los Angeles with a safe and diverse route all the way through. We had NEP Connect engineers in Los Angeles supporting us, alongside the full engineering crew in our LA production centre.”

“On this broadcast, we were using JPEG technology so the latency was less than half a second round trip, to and from Ireland. It was great. Our team is actually used to having a higher latency because in the States we do a lot of satellite and HEVC encoding – so we’re more towards a second [of latency] on a normal basis.”

Shooting in Ireland as if it’s the USA

Alan Burns is managing director of NEP Broadcast Services Ireland. “From our point of view this is different because it’s the opening weekend of college football and they’re super-busy in the States and then the NFL begins,” he explains. “Fox didn’t want to lose a full 20-30 people for seven days, with travel in and out and so on – where they could maybe do two jobs in the States in that time. That was one of the triggers why they wanted to do this one remote.

“On top of that, we suggested they talk to NEP Connect and through all sorts of calls and meetings we now have a bigger pipe in the Aviva Stadium which allows us to send 16 videos from the Aviva to Fox Sports headquarters in Los Angeles.

“The other thing is we’re doing this as if we were in America,” says Burns. “We’re shooting in 60i [59.94] not 50i, because it saves standards conversion on every signal and also because the lights at the Aviva have been upgraded to LED flicker-free – so this is the first time we have ever done a 60i production here. Otherwise you would need 16 standards converters, and all of that adds delay and cost. And with a standards conversion there is always an in-and-out resolution degradation.

“In the last few weeks our Lir truck has done BBC pres for the Commonwealth Games, then Speedway in Cardiff and on to the Rose of Tralee earlier in the week. It also did the World Ice Hockey Championships in Helsinki in June. A very varied life!”

For Adam Scarff, NEP Broadcast Services Ireland, the key to successful remote production is connectivity. “Our first point of contact through NEP Connect was Manchester, to see if they were seeing us. That was passed onto New York and onto LA. The latency was very good; we were getting our signals back within 21 frames. The multiviewer return was back within 21 frames – so there and back in less than a second, which is great.

“A little bit of extra bandwidth was required, but our strong relationship with the Aviva Stadium meant that all the doors were open. Alan and myself were there from the start of that conversation, for 3 Gigs of bidirectional extra bandwidth from the stadium.” 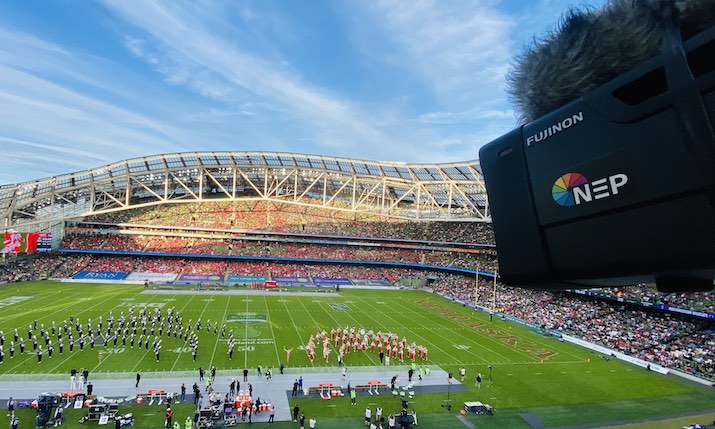 “When the connectivity of a remote production is sorted then the rest of it is actually relatively straightforward,” says Scarff. “Your gallery is just a massive input box and your OB truck a massive output box. The real challenge is how you join the two of them together: we knew from weeks out that it wouldn’t be a problem because of the relationships we have with Fox and the internet suppliers here and with the stadium.

“In order to make things easier we tried to basically recreate the US in Ireland. The whole stadium was upgraded recently with brand new LED lighting, a new mid-tier ribbon and a Daktronics [screen] upgrade. Because of that all our cameras could be run in 59.94 native which meant, especially for Northwestern, that any VTs they brought with screens and their replay wipe could be produced as if they were back home.”

Fox Sports has been producing college football remotely for over two years with a dedicated full-time group including talent. According to Fox Sports tech producer Thomas Lynch, once the connection had been made to NEP in Ireland his team was comfortable the process and outcome would be successful for this Season Opener.

“Once we started getting into a groove with Alan and Adam, they were great to work with,” he says. “They pretty much just needed information from us – how many cameras, where are we putting them, what kind of lenses and so on. Once we were able to get that information to Adam they were able to execute and it was a great partnership. The hardest thing was just dealing with time zones!

“We only brought over two camera operators, and the other seven were all Irish crew – and I think five of them had never done American football before. We spent a little time with them the day before with the director, then after that we set up a game and had our two American operators talk them through what was actually happening with the different camera cuts.

“The delay was minimal, well less than a second, which is a great turnaround time. When I landed in Dublin on Wednesday I had already gotten an email saying LA was seeing bars from NEP Connect. So right off the bat the video back and forth was happening. Sure, we had to do a little bit of work at our end to get some data for different things, but all in all it was a very good process.

“When I landed in Dublin on Wednesday I had already gotten an email saying LA was seeing bars from NEP Connect. So right off the bat the video back and forth was happening”

“The equipment we brought was to be able to get the scoring data back, which was via a Moxa Box: it transforms serial data into Ethernet data so that the scoring could be happening back at home. We also brought with us a kit to be able to do the tallies, so that if a camera was triggered back in the States the operator on-site would know that s/he was live.”

Lynch continues: “We had a little bit of effort in getting a sideline cart, which they don’t use normally in Ireland. And we had to bring in our own parabs, because that’s something they just don’t have on-site here. But besides these little bits of gear we had to bring in, it was a very smooth operation.

“Honestly I had many comments back that they would never have known that the game was in Ireland. Mike Davies talked to me over the headset and asked me to make sure to tell the crew there was no way anyone back home [would know] the distance we went through on this, so I think everybody was very happy. And when my boss is happy, I’m happy!”

“It was a real pleasure for us, and also as an island nation, to be a part of the Aer Lingus College Football Classic Series,” adds Scarff. “We’ve been there from the start and it is really good that we could keep it going with Fox and we’re hoping to continue in coming years. We’ve a great relationship with the promoter and the stadium, and we’re just delighted that Fox decided to go with us.”

“Thankfully, because of our friends at NEP Ireland and NEP Connect it was business as usual,” concludes Cheney. “Working with Alan and Adam: they make producing TV easy and we appreciate that very much.”

Nebraska vs Northwestern was Saturday’s most-watched sports telecast across any network in the United States with 4,419,000 viewers tuning into the Fox presentation, according to Nielsen Media Research and Adobe Analytics. This was an increase of over 35% on the 2021 Week Zero Illinois-Nebraska matchup (3,270,000), and an average streaming minute average of 76,510 was recorded, up +24% on last year’s Week Zero game on Fox (61,694).