Live from Dublin: Six Nations host rolls out at the Aviva for Ireland v Wales

The 2018 NatWest 6 Nations tournament is well underway with Six Nations Rugby producing host coverage in Dublin for the first time and TV3 settling in as new Irish broadcaster, having taken over rights from RTÉ.

Six Nations Rugby has produced its own world feed in Rome for Italian home games for five years, and 2018 marks the first time the rights owner takes this step in Dublin for Ireland’s home games, with coverage supplied by NEP Ireland from its HD1 truck. 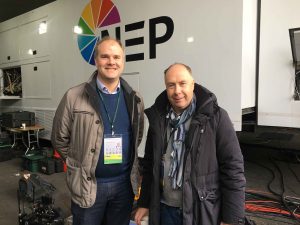 2018 also marks the first of three new four-year rights deals, with TV3 for Ireland, France Télévisions in France and DMAX for Italy to show all 15 live games. Another first is NBC Sports coming on board to take the world feed for the United States market (through third-party-nation rights holder Pitch International). There is an existing rights-sharing deal in place for the UK, between ITV and BBC.

ITV Sport is here in Dublin with its own stadium studio, as is a BBC Wales (S4C) team covering in Welsh-language for this Ireland v Wales clash through a sub-licensing deal. NEP Ireland is also producing the S4C coverage, while Irish OB firm TVM is supplying TV3’s unilateral presentation and providing its stadium-studio facilities.

The 2018 season with new sponsor NatWest has also seen a look-and-feel on-screen refresh, with Alston Elliot supplying graphics under contract with Six Nations Rugby. Another first for this season is the introduction of the EVS Xeebra multi-camera review system as part of the replay arsenal available to the TMO (Television Match Official) for in-match decisions.

Coverage of NatWest 6 Nations is huge for TV3 Ireland, which has taken over rights for the senior Men’s tournament from public service broadcaster RTÉ after a 50 year run. RTÉ retains the rights to the Men’s Under 20s and Women’s 6 Nations tournaments – and the broadcaster also has highlights rights for its flagship Against the Head rugby show on Monday evenings.

TV3 won the rights from RTÉ for 2018-2021 in a deal with Six Nations Council announced in November 2015, in what is TV3’s single biggest investment in sport. TV3 is owned by Virgin Media Ireland, which is in turn owned by Liberty Global, controlled by billionaire John Malone. 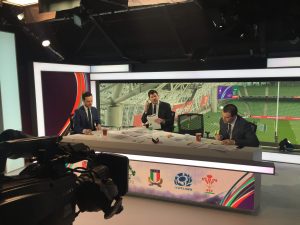 At the Aviva Stadium TV3 Television Network Head of Sport Kieran Holden told SVG Europe, “it’s very big for us, to change from 50 years of public service broadcaster RTE to TV3 which is commercial. We’re playing in the big leagues now. Six Nations is probably the biggest sports property. This is the big national event. It sets the mood of the nation.

“Anita Barrett, an external agency, was brought in to do the design of the TV3 studio here in the stadium, which was built by 53 degrees. The graphic design was done in-house. This is quite a big studio and we wanted to do a little bit more than just having a glass box looking over the pitch. We’ve another area here which is a demonstration area with a screen, which works well.

“It’s unusual now to have this type of studio in a stadium. We can have a jib in here, and a lot more cameras. TVM provide the facilities – they do our add-on broadcast to the NEP world feed. For our away games we use a company called Vitel to supply facilities.

“TV3 were not looking to revolutionise the coverage,” said Holden. “It is just about evolving things, with a tweak here and there. RTÉ did a fantastic job, over 50 years; they brought rugby to the masses. We’re thankful for that: we’re trying to just come in off the back of that and carry it on.

“Some of our panellists are guys who used to work with RTE, and I would say our 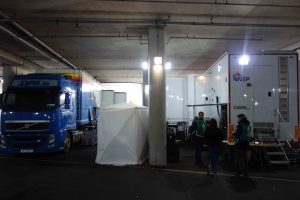 Side by side: On the left, TVM truck producing TV3 press and to the right, NEP Ireland truck for the world feed

production is very similar: we’re based at the stadium for Ireland games and have a smaller presence at the away games as RTE would have done. We’ve looked at their coverage and just tried to see if there areas where we could improve it. All the things they did well, could we do any better? Or in a different way?

“We’ve tried to bring some of the look from our home studio at Ballymount, such as the screen below the desk. Our studio is quite light, compared to a lot of other broadcast studios. We looked at best practice.

“We’ve always gone for desks,” said Holden. “Some people think that’s outdated: but there’s quite a good practical reason for that as if you put big burly rugby players in chairs in a studio you may see a couple of things you don’t necessarily want to see! Ankles, shoes, maybe a shirt coming loose from the suit … the desk hides a multitude.

“We’re doing unilateral bits on pitch-side and in the tunnel and a couple of extras, like a Piero system for analysis. We know this is a four-year deal and we’re feeling our way into it. We’re not trying to reinvent things where we don’t need to,” said Holden.

Rights holders get ‘best of both worlds’ with Six Nations host

We are seeing a trend all across live sports – whether golf, or tennis, or motor racing – for rights owners to take more control of their own output, rather than relying on third party broadcaster partners to produce coverage. This is evident here in Dublin, with Six Nations Rugby now producing its own world feed through a contractual relationship with NEP Ireland. 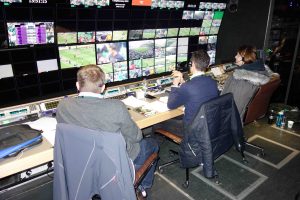 Inside the world feed truck on match-day

Alan Burns, Managing Director of NEP Ireland told SVG Europe in the Aviva Stadium on Friday afternoon, “Julian Maddock, Executive Producer for Six Nations, looks after the games in Rome and Dublin as well as across the Women’s competition. Julian was previously Executive Producer for rugby at Sky Sports. The match director is Rhys Edwards, who is Welsh, has directed Rugby World Cup, really knows his rugby.

“So from my point of view it’s very much a ‘multi-cultural’ crew – it’s a rugby crew from England, Ireland, Scotland and Wales. Most of this crew moves between Rome and Dublin for the Six Nations,” said Burns.

“And of course, Irish broadcaster RTE still has the Women’s and Under 20s 6 Nations rights as well. NEP Ireland is doing both those games, with our brand new Emerald truck. Emerald is a rigid truck which was finished on January 30th and will be based here in Ireland,” he said.

Executive Producer Julian Maddock commented, “This is my first time on the Six Nations, so it’s all new to me. The key is getting to know everyone. Pre-match we do identify the editorial stories and do our best to give everyone those stories — for example tomorrow, with the three British & Irish Lions coming back into the Welsh team.

“They [the rights holders] should get everything they need, without asking for extra. Once the teams are in the tunnel and the match commentary starts, that is the world feed. We can’t do any extra for the broadcasters. We tell the story as it happens, from a totally unbiased point of view.”

For Match Director Rhys Edwards, the change to a world feed produced by the rights owner “actually makes things easier for everyone. I’ve been on both sides, with a world feed and with a broadcaster — and it’s not that a broadcaster would deliberately try [to introduce a certain angle or bias] but it just happens naturally. If the world feed gets sucked into that, then the other takers miss out. We know the stories of the games and we try to provide images of all the people they would need. They should be getting the best of both worlds.”

Rugby TMO with EVS and HIA through Hawkeye

One innovation in the world feed truck is the introduction of EVS’ Xeebra review system – even though Xeebra is not integrated with existing EVS LSM networks. Alan Burns explains: “unfortunately, the existing EVS network is not compatible with Xeebra. Two different philosophies, so you can’t connect a Xeebra to an EVS network – which is a bit of a pain. Whether it came out of two different design teams or not I don’t know, but you can’t marry them up. That’s disappointing.

“However, Xeebra has something: a gestured zoom. So for the TMO himself it’s actually 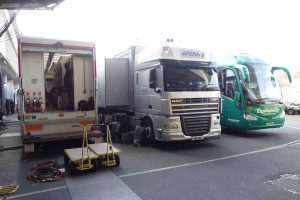 quite nice because he can tap on a touchscreen and zoom in – which you can’t do on a traditional EVS LSM network. It’s very complicated to do it. We’re using the traditional network for TMO, which gives access to every single angle that’s out there. And then the Xeebra can take feeds from that and zoom in, depending on the incident in the match.

“As you know the TMO now can review in-play infringements,” said Burns. “When there’s a pause in play he can bring an incident to the attention of the referee.

“He can now use the Xeebra to look at stuff, like a scratch-pad. He can say, ‘Ref, at your next break, I just want to show you this foul-play or forward pass. You need to pull that back’. And he doesn’t have to go near the TV director to say, ‘I want to look at something’.

“Hawkeye is used here for the HIA [Head Injury Assessment], but the TMO is still done by broadcast equipment. We think it’s faster. We did some trials in 2016 where we used Hawkeye, and then we went back to traditional quick, hard broadcast gear with loads of guys who know how to do rugby – and we were able to reduce the TMO decision-making time considerably. It’s in the truck, in the cell, controlled by the broadcaster,” he said.

“The TMO sits in the production truck, in a small isolated area with an EVS operator. When the referee does this [draws the TV screen shape with his hands] we mute the commentary in the production truck, so there’s no interference from commentary team passing an opinion that might influence the referee. The director can still hear commentary in his ear-piece, but it’s not in the gallery. When the TMO says ‘I have a decision’ we open the mic and see the whole thing.

“It’s the first time we’re using Xeebra, and we’re using it on all the games in England, Ireland, Italy, Scotland and Wales. The only place we’re not using it is in France, as they have their own [Digital Video Sud] system. That system does have the ability to zoom like this as well.

“Six Nations has a contract with Opta for statistics,” continued Burns. “They’re logging 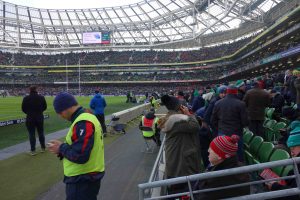 Half time in the stadium, Saturday 24 February: Ireland eventually ran out 37-27 winners over Wales

all the games remotely, and filling this page here in the truck with all the match stats. A broadband connection brings it in and feeds it all into the server, and we then distribute it to the commentary positions and whoever needs it.

“Any broadcaster can log on and see the stats, if they’re doing an away game. NBC can log on in Connecticut, and they can see all the stats themselves. That data also goes to teams, press, everywhere.

“Our focus here is on a world feed, not on an editorial show driven by a broadcaster,” said Burns. “There’s a difference. We’re producing for all the clients of the Six Nations. Our relationship is now with Six Nations Rugby: here, it used to be with RTÉ for Ireland. That’s a big change.”