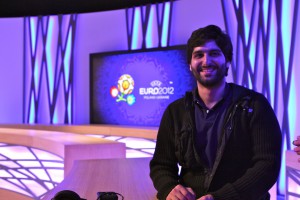 Al Jazeera Sport continues to make a big impression at major European sporting events, and for good reason. Not only does it have 16 channels that it needs to programme, but its growing commitment to being on site often wows other rights holders and even host broadcast organisations.

Euro 12 is a perfect case in point:. the network has nearly doubled its staff from 2008 and has a studio in the IBC in Warsaw that measures 300 square meters and at first glance reminds one of what a Star Trek telethon would look like, with plenty of seating room, fantastic lighting, video displays, and more.

“We have seven cameras in the studio plus a wide-angle robo, and during the show, we’ll have the host with four analysts as well as journalists sitting on the side,” says Ali Hassan Al Naama, Al Jazerra Sport, senior coordination for the production section and TV rights acquisition department. A video wall is also located in the studio for an ex-referee who can talk about situations in the match. 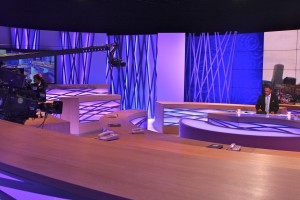 Along with the studio at the IBC are two studios in the Warsaw Marriott overlooking the Palace of Culture, one of the most iconic buildings in Warsaw. There two morning shows are produced, at 9:00-10:30 and 11:00-12:00 local time.

“From those sets, we will talk about the city, the people, and get outside of the matches,” adds Al Naama. “And then we have studios at the matches.” 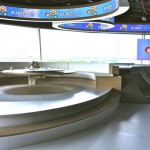 Al Jazeera has two sets at the Marriott in Warsaw.

At the IBC, seven Avid editing suites, three off-tube commentator and translator positions, and a main control room pull together all of the content from within and outside the IBC. A signal is then sent back to Doha in Qatar for distribution to viewers.