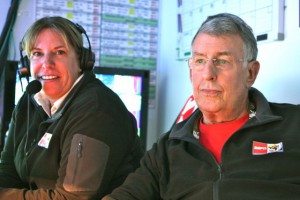 ESPN’s Euro 2012 operations take the concept of the “at home” efforts to a new level as it takes advantage of large fibre pipes and file-transport technologies to allow a large percentage of operations, including studio, master-control room, and editing, to be done from the ESPN Digital Centre in Bristol, CT.

“This is the first real test of how to make the Digital Center act like a remote, and we have to think differently,” says Geoff Mason, ESPN senior production specialist, who is on site at the IBC in Warsaw with a small technical and production team. “We are a hub for getting feeds from UEFA and other broadcasters, like a live camera shot from ARD at a fan zone in Berlin.”

The move is the result of months of planning by the production and technical team under the leadership of Jodi Markley, ESPN, SVP, Operations; Jed Drake, SVP and executive producer, Production; Mason; and others.

“We’ve been making investments and improving things to the point where we can set up our own transport and monitoring, and get it tuned up, in six hours,” says Strilkauskas. The transmission flypack got its first real-world test during the National Football League Draft in New York City in May.

The core of ESPN’s coverage is, of course, the matches. ESPN is transporting eight signals from each match back to Bristol via fibre: the Live Stadium Feed at the core of the broadcast; a Clips Channel offering different replays; a Fan/Reaction Channel; two team feeds that focus on the benches of each team; a Tactical Feed from the behind-goal high camera angle; and an uninterrupted feed from the main match camera, camera 1. Those feeds are transported at 40 Mbps using MPEG-4 (total capacity of each of two pipes exceeds 1.6 Gbps).

“All those feeds are sent back and then other feeds, like a camera feed from Castle Square, are put onto a router and available to be selected from Bristol,” says Claude Phipps, ESPN, director of special projects. “We have commentators here in Poland and Ukraine for select matches, and then others are calling matches in Bristol VO booths.”

An Evertz Mag View touchscreen controller/multiviewer also plays an important role, allowing staffers in IBC to route signals to the Digital Center by simply pressing on an image and a router input or output.

The live content is only part of the story. The IBC’s LIVEX server also has hundreds, and eventually thousands, of hours of content around each game, including press conferences, scenic and interstitial video, and more. With the help of Signiant and EVS, the Digital Centre staff can remotely access that server.

“They can browse clips and deposit them into the servers in Bristol, with some of the content going into the Quantel system and other directly to Avid editing systems,” says Phipps. “And there is a new software-based standards conversion system that converts the files in real time as a file, so there is no need to go to baseband for transcoding.”

Mason said that day one may have been the best first day for a large-event broadcast that he has been involved with, a result of solid preproduction planning and rehearsals.

“I’ve never seen so much planning and forethought go into one project,” he says. “But coming off of the World Cup in South Africa and Germany, we were on a role and don’t want to fall on our face because we were integrating with the Digital Center as opposed to having everything on the road.”

As the tournament progresses, ESPN will continue to expand its coverage, including the use of an SNG vehicle that will be shared by ESPN and ESPN Deportes once the quarterfinal stage is reached. Later this summer, the transmission racks used in Warsaw will then make the move to London, where they will be used for ESPN’s coverage of the Summer Olympics.