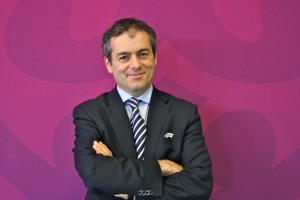 Euro 12 is under way, and, for UEFA and 44 broadcasters around the globe, it got off to a good start technically this weekend. The team, headquartered at an International Broadcast Center in Warsaw as well as eight stadiums across Poland and the Ukraine, delivered deeper match coverage to a wider range of distribution platforms than ever before. “It’s a big production covering two countries from the Baltic Sea to the Black Sea, and they are vast,” says Bernie Ross, head of TV production for UEFA.

A number of advances have been made since the last Euro, held in 2008 in Germany. In terms of match coverage, the biggest change is the addition of a second high-speed camera for all matches, a reverse camera to get shots of VIPs, two reverse-coverage cameras, and an RF handheld camera to capture fan reactions.

“The main focus will be on fan reactions and showing a bit more of the richness and sense of the event in the stadium,” explains Ross. “Broadcasters can exploit those dedicated fan cameras that include the RF camera and a couple of dedicated super-slow-motion cameras.”

Logistics are often the biggest challenge for an event this size, and Euro 12 is no different. Driving from Warsaw to Kiev, for example, covers 820 kilometers, but estimated travel time by car is more than 13 hours, an average of only 60 kilometers per hour. Those relatively slow speeds seem about the norm across the two countries.

“In 2008 in Germany, if we couldn’t get from Frankfurt to Munich, there were three ways to get there, but here it’s different,” says Ross. “So we keep the trucks at each venue.”

Those OB units will produce 31 matches with a record 32 cameras covering the game, plus an additional seven cameras per match covering team arrivals, press conferences, and fans. Another new camera this year is the Cueball, a system that will be placed close to the net of the goal.

“We want something that gives different angles but is not a gimmick,” says Ross. “There is no real space for a gimmick at this level because it becomes a distraction.”

While the additional cameras will give a better sense of what it is like inside the stadium during a match, the broadcast partners delivering Euro 12 to viewers around the world also want to give a more personal touch from the stadiums. Assisting this year are broadcast announce platforms that will be located alongside the broadcast studios and provide an additional option for broadcasters who want talent to be in the stadium where atmosphere is maximised.

Of course, technology is only part of the equation. The directors have a great influence in shaping the coverage. Francois Lanaud is directing matches in Lviv and Kyiv, including the final; Jean-Jacques Amsellem is in Poznan and Wroclaw; Knut Fleischmann is in Donetsk and Kharkiv; Jamie Oakford is in Gdansk and Warsaw; and John Watts directed the opening ceremony and match.

Meanwhile, at the IBC

Match coverage is delivered back to the 14,000-square-meter IBC, where all incoming signals are received via diverse fibre networks from the venues and passed to the master-control room. There the signals are synchronized, pass through quality control, and are then switched and distributed out to rights holders. 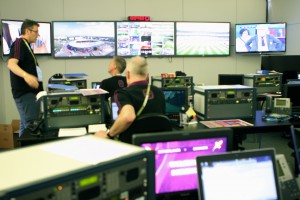 The quality-control area at the IBC ensures that incoming and outgoing signals are up to spec.

For each match, broadcasters have eight feeds available: the Live Stadium Feed at the core of the broadcast; a Clips Channel offering different replays; a Fan/Reaction Channel; two team feeds that focus on the benches of each team; a Tactical Feed from the behind-goal high camera angle; and an uninterrupted feed from the main match camera, camera 1.

“HBS [Host Broadcast Services] handled the main activity of building the IBC to the design we wanted, including the master-control room and the commentary systems,” says Ross. “They do a very good job.”

More than 400 UEFA production personnel are on hand at the IBC (about 100 are at each of the eight stadiums), handling everything from booking locations at the venues to transmission and quality control to editing and content creation for TV, the Web, mobile devices, tablets, and more.

“We have the burden to deliver solutions [for what the broadcasters want to do],” explains Ross. “There is a large amount of video content on the Website, and the Internet production team shares all the content on the SAN [with the broadcast team], which is a new concept.” 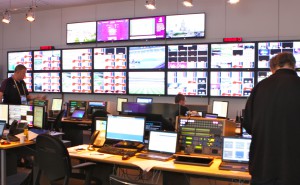 The Master Control is the central hub within the IBC.

The content available to broadcasters includes much more than just the game action. More than 20 camera crews are traveling around Poland and the Ukraine with the teams, getting video of players leaving and getting on buses, practices, and more. And beginning in December, UEFA delivered eight 26-minute magazine shows and 30 minutes of raw footage to rights holders.

“We took our magazine shows up to the next level, and when you add in the live matches coming in every day, we will create about 2,000 hours of content,” says Ross.

At the center of all IBC operations is LIVEX, a content-delivery service that was first used successfully at Euro 08.

“LIVEX is a server provided in conjunction with EVS that delivers all the internal services for broadcasters,” says Ross. All match feeds, footage, and more than 400 hours of additional UEFA programming are searchable via a fully logged digital library and available for browsing at low resolution. The file format is AVC Intra 100 within an MXF wrapper.

At the core of LIVEX are six EVS XT3 systems used to ingest 24 HD-SDI channels onto a SAN that can store 6,000 hours of content and has 30 Gbps of bandwidth, allowing UEFA staffers to browse low-res proxy video using 25 IPDirectors and then pull out high-resolution versions. There are also 13 Apple Final Cut Pro editing systems with IP Link (allowing them to access the IPDirector database and import clips in real time), seven Xedio CE editing suites for ENG rushes, and 15 XTaccess systems to exchange and transcode media.

Also available is LIVEX-On Demand, a password-protected Web interface that allows clips, packages, and other content to be browsed at low resolution via Web browser, ordered, and then delivered, through a cloud-based system from Aspera, in the XDCAM HD 50 format.

“It’s working extremely well, as already more than 200 items [as of June 9] have come straight into the server for editing and then pushed to broadcasters,” says Ross.

With the tournament not ending until July 1, there will no doubt be thousands of additional items available by then. But even given that large amount of content, it is guaranteed that Euro 12 will be a quaint memory come 2016. When the next tournament begins, in France, there will be an additional eight teams and an additional 20 matches, placing an even larger burden on staff, infrastructure, and logistics.

UEFA and its rights holders will be ready.