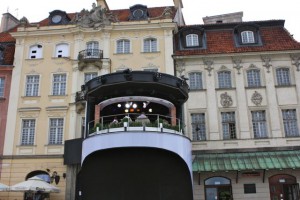 ITV's studio required some tricky construction due to its location in a UNESCO heritage site.

For Euro 12 rights holders, the International Broadcast Center in Warsaw is home away from home. But UK broadcaster ITV is calling the iconic Castle Square area home as it centralises its operations and staff in a studio overlooking the UNESCO World Heritage site. It also gives it a programming advantage versus the BBC, whose studio show is produced from the UK.

“We could have remoted the cameras from the studio to the gallery in the IBC, but our team put the priority on being with the talent,” says Roger Pearce, ITV, sport technical director. “In South Africa [for the 2010 World Cup], we had everything in the same place.”

ITV wasn’t confirmed as a rights holder until December, a late nod that had the production team and its partners moving quickly to secure a studio location, develop a solid production plan and fibre connectivity between Poland and London, and more. 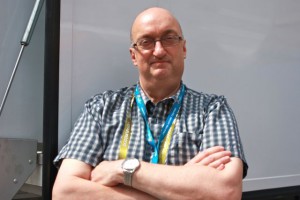 At the top of the ambitious plans was the construction of a studio in Castle Square. Because Castle Square and its environs are a UNESCO Heritage Site, ITV had to build its set without physically touching existing structures, so a Polish architect designed a free-standing steel structure that was three stories tall and able to be mounted right next to a building out of which graphics and studio personnel operate. 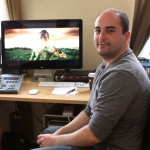 There are some firsts for ITV, including relying almost entirely on LED lighting in the studio at Castle Square. Some 2.5-kW HMI lights are still required on a hot day, but Pearce says the production team has been very impressed with the look and capabilities of the LED lights.

“They are fantastic lights, and they look beautiful from the outside of the studio,” says Pearce. “LED lights have really come of age.”

Another unique offering is animations and graphics projected onto the tower of St. Anne’s Church, located near the studio set. The tower, painted white, provides a blank canvas for Shock Solutions, a specialist in mapping graphics and images to a building or object and then projecting those graphics onto the object, wrapping it in moving images, light, and color.

The four projectors each covered a different section of the tower, and Shock Solutions owner Andy Hook says the challenge was that the location of the projectors required them to operate at a 45-degree angle, necessitating some extra preparation work during the mapping process. 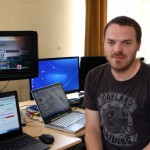 Hego graphics are also providing some new functionality, allowing graphics to be combined with a live video stream and the signal to be mapped onto a 3D object like a waving banner or flag.

“It’s a different way of showing graphics, and, because we manage our own software, we can change on the fly to meet these types of requests,” says Mark Bowden, Hego UK, head of operations.

Signals from the studio are sent via fibre around the corner to a small production compound that is home to SIS LIVE’s OB2 unit, transmission, and other technical support. The studio signals are then mixed in with match feeds that arrive from the IBC before transport to London via STM4 fibre using JPEG2000 encoders and decoders. All editing is also done in London.

“We also have three EVS XT3 units and a small master-control room at the IBC, but all the contribution work is done here,” says Pearce. 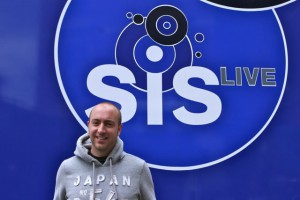 James Clement of SIS LIVE is on hand and overseeing OB2 as it serves ITV's needs.

James Clement, SIS LIVE, sales director, outside broadcast, is on hand with the SIS team, ensuring that all goes well in OB2.

“The biggest challenge is that we are away from home so we need much more resilient kit, spares, and, as with any production, it grows, and there are add-ons.”

During matches, the truck brings in the primary match feed, a clips channel from the IBC, the tactical feed, pitch-side presentations from the stadium, and more. 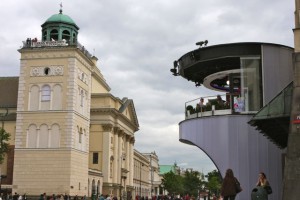 Images and graphics are being projected on St. Anne's Church tower near the ITV studio.

With feeds coming in from stadiums across Poland and the Ukraine, the IBC across town, the studio around the corner, and SNG vehicles following the teams from England and Ireland, the potential for audio-sync issues, delays, and communication-systems problems requires an extra layer of diligence.

“The show is thrown between different places so we need to make sure it doesn’t look like a trans-Atlantic transmission [with delays],” adds Clement. The solution is additional audio staff to handle communications and sub-mixes so the main audio mixer can concentrate on the show.

The question now for ITV is how far can the England team progress? An appearance in the final in Kiev, Ukraine, for example, may require a change in plans to bring the production closer to the action so that viewers and fans see the ITV advantage.

But, for today, all eyes are on the England-Sweden match.