Live from EURO 2016: Inside the dynamic IBC operation at Porte de Versailles 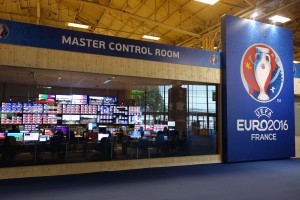 Football is unlike other sports. It arouses a unique level of passion and fan fervour. It’s estimated that 10% of the population of Iceland (over 30,000) people headed to France to be part of the EURO experience. 100,000 people went to the Fan Zone at Champ de Mars in Paris to watch France defeat Republic of Ireland in the Round of 16, a game played in Lyon. If the streets of your city or town have suddenly become eerily empty of an evening this summer, you know your country has kicked off in a EURO 2016 match.

UEFA Host Broadcast (HB) is tasked with bringing this passion and fervour to EURO 2016 fans around Europe and beyond. Central to its task is the International Broadcast Centre, located in Hall 6 of the Palais des Congres at Porte de Versailles.

On June 27, Round of 16 Match Day, UEFA Head of TV Production Bernard Ross and UEFA Digital Media Manager Olivier Gaches guided SVG Europe around an IBC operation that reflects both the need for a centralised broadcast infrastructure and also how the accelerating convergence of TV and digital is driving a de-centralisation trend that will become far more profound for future tournaments.

At UEFA EURO 2016 there are 51 matches in 10 different venues across France, with up to 46 cameras per venue for production including super slomos and hypermotions — which is an addition of around 10 cameras compared to EURO 2012. There are also 43 ENG teams spread across the different venues and training camps across France, delivering team, cultural, sponsor and behind-the-scenes additional programming.

For the first time in EURO history, eight matches – the opening, quarter-finals, semi-finals and the final – are offered as full 4K UHD productions. The live 4K UHD match feed starts at KO-15’ and ends at FW+5’. This feed is delivered as 4x HD-SDI 1080p 50 (3G). Broadcast partners can add their own graphics in the IBC, which are keyed synchronously with the multilateral graphics at the venue.

“The IBC is the focal point of UEFA EURO 2016 broadcast feeds and facilities for both the UEFA host broadcast (HB) project and for the broadcast partners who are housed here. It’s here that we receive the 16 or 17 multilateral feeds from the stadium, quality control them, before distributing them across the world to our 130 global broadcast partners,” said Bernie Ross.

“I would start by saying that one of the most important parts of our job as UEFA HB is, throughout all the matches, to bring the best in the business together, so that we can actually deliver our cutting-edge content to as many UEFA Broadcast Partners (UBPs) as possible.

“What we do here at the IBC and at the stadium is content, both live match coverage and additional programming. Across UEFA EURO 2016 we will produce around 3,500 hours of total programming, and all of it needs to be to the highest possible standard.

“There are 40 UBPs here at the IBC. There’s one distribution, contribution and creation point here. Broadcasters want to be close to UEFA and to our feeds. The trend [in terms of takers] has not been to go down – the trend is stable, at both the IBC and venue,” said Ross.

“The virtual IBC is not there yet. IP is not there yet. However, by 2020 a lot will be different. I think there will be both: a physical structure, which is an IBC, and a series of virtual services. All of the NGS services Olivier Gaches is showcasing here at the Broadcast Showroom – a first for a UEFA EURO and the most popular part of the IBC for broadcasters – everything is about virtualisation and decentralisation,” he said.

“Take the BBC for example: the BBC’s output on other platforms doesn’t change during the EURO. They don’t stop using their existing edit suites. They actually need more capacity. So they come here to the IBC because we build edit suites for them. That’s the difficulty [for full virtual production]. We build temporary capacity, they use it, and that helps. Should we be able to deliver a virtual IBC, they would still need that extra capacity,” said Ross.

Tour around the International Broadcast Centre 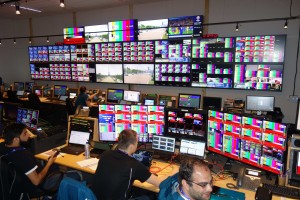 The Master Control Room (MCR) is the audio and video control centre where the switching of all multilateral and unilateral feeds and signals takes place. UEFA brings back 16 separate feeds from each venue to the MCR for distribution to broadcasters. These 16 feeds cover all angles of each game and allow broadcast partners to completely customise their coverage. A seventeenth feed, the 4K feed, is also available for the eight 4K matches.

UEFA also uses these feeds to produce the international signal distributed across the world, for quality control purposes and to create additional programming. The Live Stadium Feed is the main match feed. It contains all the build up to the match, the match action and post-match highlights. Clips channel 1 and 2 provide a selection of unseen camera angles, along with real-time and slower, longer versions of in-match replays.

Team A and Team B feed cameras are located in the reverse stand and focus on each team’s bench. They provide coach and bench reaction shots throughout the match. The Tactical feed is an uninterrupted feed from the main match camera (Camera 1) used for match analysis. Pre-match this carries the helicopter signal. Broadcast partners are also able to access six additional feeds at the IBC and venues via the dedicated additional feeds router.

A total of 816 broadcast feeds are being delivered to the MCR from the venues during the tournament. This amounts to over 2,000 hours of content. The MCR is operational 24 hours a day and is operated by nearly 30 staff on a matchday.

“Next to the MCR are the two most important rooms in the IBC, the Central Equipment Room (CER) and Telecom Interface Room (TIR). The 70,000 km of diverse fibre from stadium to IBC, delivered by Orange, that constitutes the UEFA VandA network terminates here,” said Ross. “Each match delivers 16 multilateral feeds, plus all unilateral feeds – and eight matches also include an additional 4K feed. All of that comes in to these rooms where it is ultimately distributed to broadcast partners via our satellite farm.”

“The EBU is our contribution and distribution partner, with Lawo delivering our adaptation equipment. Both providers benefit from this set-up and can give us an extension of their services. The EBU operates all our satellite and fibres on Champions League, and we take their intelligence and apply it to other competitions – including the EURO. This means we also need intelligent partners to work within UEFA’s technical framework – which includes Lawo,” he said.

“Fibre people think fibre solves everything. It doesn’t. Intelligent fibre does. And intelligence comes from the boxes at either end. That’s the work we’re doing with various providers. The big difference this time [at EURO 2016] is that we really are interconnecting in various ways. And in the future we will be building a physical IBC and also building in the cloud so that our content and distribution can be everywhere, including remote location access and remote distribution,” said Ross.

Livex Remote – Full Edition is a new service for UEFA EURO 2016, providing subscribing partners with the opportunity to access all material produced during the tournament from their home premises. Content can be browsed, selected and clipped remotely and is delivered to their premises through the pre-installed EBU box.

“This new service was created for selected broadcast partners — including beIN Sports, who didn’t 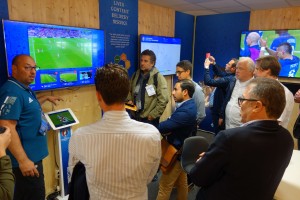 want to come to the IBC,” said Gaches. “It’s the same as the Livex service at the IBC, and there are six takers — BeIN Sports from three sites, RAI, Dolce and MTV Hungary. They are at their home and have web access to our server; they browse or content live and choose what they want. We deliver everything, on the box, to their locations. The box enables the user to retrieve content and do some orchestration, depending on the metadata of the content.”

“There are 28 takers for the Livex Remote – Additional Programming service,” said Gaches, “We push all our additional programming content to them directly, on their box. To date, we’ve already pushed more than 2,700 video clips for TV exploitation to takers. We create the clip once; we push it and distribute it to 28 EBU boxes.”

The UEFA EURO 2016 live studio backdrop service, also new for this tournament, produces a live video stream of a stadium panorama. A custom ultra-high resolution four-camera array allows broadcasters to create the impression that their studio is located in-view of the pitch at each venue, and delivers an immersive experience for the viewer at home. The stream is distributed to the UEFA broadcast partner’s studios, either inside the IBC or at their home premises.

“There are broadcasters who would like to present their studio show as if they were in pitch-view,” said Gaches. “That’s why we’ve put in every stadium an HD camera with four heads that we stitch together and we send that to the broadcaster’s studio in order for them to have a huge backdrop. Takers are ARD & ZDF here at the IBC, plus TV4 Sweden who are taking the service to their premises. For them we create a stream, 7,000 pixels to 1080p, and deliver it to Sweden.”

UEFA EURO 2020 will be a unique event in EURO and football history. Played across 13 countries, in 13 separate stadium the heart of the TV match coverage will be to capture the spirit of this ‘EURO for Europe.’

“The virtual reality, 1080p, HDR, HFR, and 4K UHD remote production tests we’ve conducted across EURO 2016 have all been with EURO 2020 in mind” said Ross. “Building on the success of UEFA EURO 2016, the philosophy of ‘the best seat in the house’ will be extended and enlarged to reflect the scope of EURO 2020, from east to west and stadium to sofa. The key to this immersive and Europe-wide delivery will be equally Europe-wide transmission network and, in the IBC — whether virtual or physical — a central hub for the distribution of feeds and content.”