German public broadcasters ARD and ZDF are once again on site at a major world-sporting event, this time having the largest presence within the International Broadcast Center for the FIFA Women’s World Cup 2015 in Vancouver. And the efforts are paying off as German viewers are watching, despite a time zone difference that has German matches airing live around 10 p.m. in Germany. 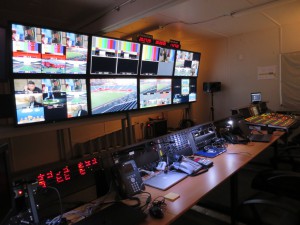 The front bench in the ARD/ZDF master control area for the Women’s World Cup.

“We have a lot of viewers as 7.6 million people watched the second match which is 36 percent of the market,” says Vitino Zoiro, technical manager, special projects. “We’re a little surprised but in a positive way.”

A technical team of 25 people is making sure facilities located within 12 production trailers are all running properly, including a master control facility and an Avid ISIS server that can store more than 700 hours of content (and is tied to six Avid Media Composers) as well as an EVS server that has 500 hours of storage.

Zoiro says that there is also an OB van that is travelling with the German team and has a laptop editing system for cutting story packages.

Pre-game shows usually air 15 or 30 minutes prior to kickoff, depending on the rest of the ARD or ZDF schedule. With respect to the German matches ARD will air one match and then ZDF the next. ARD is on deck for the next match to be played this weekend. 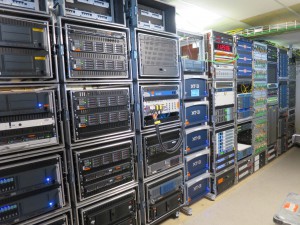 ARD/ZDF can record 500 hours of material on EVS servers.

The biggest challenge has not been technical as everyone is very familiar with the facilities and workflows. Instead it has to do with time zone differences as the Vancouver IBC is nine hours behind Germany.

Andreas Lauterbach, director of programming, says, “When we start to work [the team in Germany] start to go home and the other way around.”

Zoiro points to the opening match of the tournament on June 6 as a perfect example of the challenge. The IBC is in Vancouver while the OB van was in Ottawa for Germany’s first match on June 7. But the first match was played in Edmonton so the broadcast team called the game from one time zone for a game played in another time zone sent to an IBC in a third and, ultimately, to viewers in a fourth time zone.

Lauterbach says that at the end of the tournament 38 games will have been broadcast on TV while 14 will be streamed live online as a result of matches being played at the same time.

“Also after a match is done we quite quickly create a 90-second or two-minute clip so when viewers wake up they can see what happened,” he adds.