Live from FIFA Women’s World Cup: One last push from TV teams for the tournament final

Sunday night’s FIFA Women’s World Cup final between the Netherlands and the United States brought to a close a month-long showcase for some of the best athletes in the world. Ratings have been up, often impressively, compared to 2015. The quality of play and competitiveness of the matches has also improved. And for the team at FIFA TV, and their appointed host broadcaster for this event, HBS, the behind-the-scenes improvements have paid off.

The two semi-finals and final have all been played at the Stade de Lyon, a 57,900-seat venue that is located in the city that is the home of women’s football in France. It was a fitting location and with enough compound space for both an expanded unilateral presence from rights holders as well as the FIFA TV multilateral production at the core of the matches it became the de facto home for a number of activities the final week.

“The IBC in Paris is still fully staffed but the difference this week was that Lyon became the main FIFA and LOC headquarters,” said Neil Darroch, senior manager, TV operations, FIFA TV. “It allows us to support the venue team with the increased attention and activates around the final matches and makes It easier for us to manage some of the things face to face.” 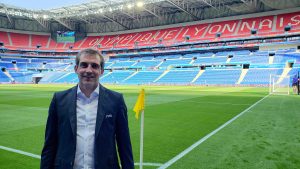 The final week’s matches have seen an uptick in the number of cameras that are being deployed. A helicopter shot, cablecam, and an external camera mounted on a 60-metre crane that is primarily used to receive transmissions from the helicopter are making a difference from above while a ultra-motion Polecam behind each goal and a super motion camera level with the six-meter line in front of each goal will make a difference around the pitch.

“We picked a camera plan for all of the matches that ensured a high level of coverage and we found that it could fit every stadium,” said Darroch of the challenge of outfitting coverage for venues that vary in seating capacity by as much as 30,000 fans. “Some stadiums had better locations for certain cameras than others but they all host football or rugby matches on a regular basis, so the main camera positions were where we needed. For some we needed to kill a few seats or upgrade a platform but in general they were all the right size.”

Rights holders on site with an expanded presence include Telemundo which moved its studio production team from Paris to Lyon and is now operating in an enclosed studio with a great view over the pitch and stadium. It is also, unlike the rooftop location in Paris, climate controlled and free of weather conditions that were often challenging. German public broadcasters ARD/ZDF, England’s BBC, and NOS Netherlands, and Canal+ France each stake a claim in three open-air studio locations inside the stadium.

“There is a tendency towards wanting to do outside presentation studios, so we need to find locations to do large outside studio presentations that also capture the unique atmosphere of a Women’s World Cup,” said Darroch.

Fox Sports is also on site with a smaller studio presentation outside on the plaza as fans walk into the stadium. The two-camera shoot is integrated into the main studio show which is still produced out of the Trocadero-based studio in Paris.

“The LOC, FIFA and HBS really worked hard to give us the shot that we had always talked about and 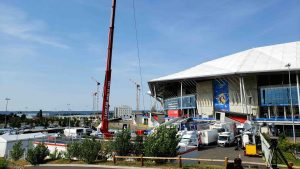 The TV compound outside the Stade de Lyon

that we were looking for,” said Kevin Callahan, Fox Sports, director of World Cup technical operations. “It was fantastic and when the fans are outside the stadium, that is so much a part of this sport and this event.”

Other improvements for rights holders include expanded pitch side presentation opportunities as they are available behind each goal and also both sides of the touchline.

“Now a rights holder can get into a position with their team warming up behind them and they can stay in their position longer, until just before teams come out, resulting in a better product,” said Darroch.

Another major challenge for all rights holders is getting a chance to get interviews with players and coaches before and after matches. FIFA TV has taken steps to improve that as well as teams are asked to make a player available for a pre-match interview as opposed to just the coach.

“It enriches the content as they have a different perspective from the coach and the teams have been really cooperative as the athletes are really well trained for media interviews,” said Darroch. “And it’s important as it promotes the athletes as there are only a handful who are well known globally.”

The FIFA team also took steps to keep the tunnel cleaner for the important walk the teams make onto the pitch. Previously lights and cameras could be set up prior to the match but now only pre-cabling is allowed prior to the start of the second half.

“They can only set up during the second half and the result is a beautiful, clean shot when the teams are coming out, allowing the focus to be on the players who are the stars,” said Darroch.

Stade de Lyon also offers up plenty of space for a pre-mixed zone which serves as an extension of the flash area for pre-match interviews. There is also a pre-built room that is available as a studio for longer post-match or sit-down interviews.

“Some rights holders have a specific style of show they like to produce so that studio offers a cabled, soundproof studio with backdrops that they can use,” said Darroch.

Another new enhancement is the mixed zone taking place immediately after the flash interviews, located inside the stadium where media can line up and grab interviews with players.

“Now within 15 or 20 minutes after the match the players come through here so that reporters can get quotes and file their stories where previously they would have to wait for the players to shower and come out of the dressing room which could take much longer,” said Darroch.

“But now within 30 minutes the athletes can get back into the dressing room and have completed their TV & Media activities. It’s worked out great and is something we will look to continue for other events as it is the right way forward to serve the media. It’s made a big difference.”

When the next edition of the FIFA Women’s World Cup comes around in 2023, look for FIFA TV to once again raise the production a notch, embrace new workflows, and new technologies. Some of those decisions rely on broadcasting trends around the globe but the goal will once again be to grow the game.

“As much as this is about showcasing the women’s game on TV, this is the pinnacle for all of the players who come here,” said Darroch. “If they’re working that hard on the pitch, we should be doing the same off the pitch.”