German public broadcasters ARD and ZDF tackled the 2018 FIFA World Cup with a small team of 15 technical people at the IBC in Moscow and more than 300 back home in a temporary facility at SWR in Baden-Baden housing a studio, two production-control rooms and 11 Avid edit suites.

“It’s more or less like an IBC,” said Vitino Zoiro, technical manager, special projects, ZDF, who is in Moscow. “SWR had the existing space because they are changing their technical facilities. There was a gap when we could use the space.” 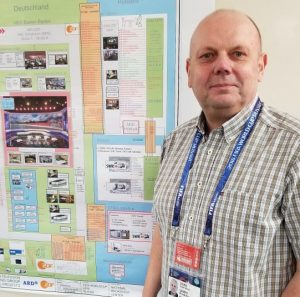 The presence in the IBC also reached out to the stadiums for German matches during the Group Stage. ARD and ZDF had their own OB unit in Russia, renting additional equipment from Russia’s Movicom when Germany played matches in Moscow and Sochi and it was too difficult to get the remote production unit from one location to the other in time for the match.

“The content is sent directly to Germany, where it can be edited in the Avid editing suites,” said Zoiro. Only two edit suites are located at the IBC, with two 10-Gbps circuits used to send all the needed content to Germany for final production and distribution. File transfers also are used to get content back to Germany.

The highlight in Baden-Baden is a studio with a large LED screen that can be broken into strips or used as a single screen measuring 11 sq. metres with a 1.6-mm dot pitch. A production team from ARD/ZDF visited Russia in May and used an 8K camera to shoot backdrops that can be displayed on the screen with maximum image quality.

“The quality for those images needs to be very high because the LED board is so large,” noted Zoiro. “We have some graphics content as well and can also use the UHD signals from HBS and then send them over to Germany, where they can choose what they need.”

For audio post production, ARD and ZDF had already invested in two Pro Tools Ultimate systems, including Avid S6 consoles, for the 2018 PyeongChang Olympics. These are now also being used for the World Cup.

For format conversion, the public broadcasters rely on Kudos equipment from Grass Valley. UHD/HD conversion is done by an AJA converter.

Qvest Media also complements the video-monitor walls in the central studio in Baden-Baden. Evertz VIP-X multiviewers are used for the interaction of the displays. Qvest ensures an efficient system configuration for the numerous workstations by means of an additional KVM matrix, including workstation modules manufactured by Guntermann & Drunck, which supplements the ARD and ZDF gear.

There are two control rooms in Baden-Baden. One is used for the studio production. The other handles the LED board, which requires deltatre augmented reality to be integrated with the five cameras.

“It makes no difference if the studio is here or in Baden-Baden,” said Zoiro, noting that, at matches, the production team takes advantage of flash positions and standup locations.