BBC Sport is moving forward on a number of fronts in Russia including increased collaboration with ITV; the stunning 360° Red Square presentation studio; a nascent UHD HDR service to iPlayer: and a FIFA VR app delivered to viewers.

At the Red Square studio graphics playout is achieved by Vizrt engines, using Alston Elliot-developed plugins and software applications enabling fast calibration and setup. The studio features a window with the view of St. Basil’s Cathedral and the Kremlin. 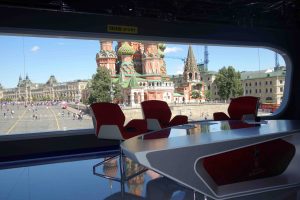 Inside the BBC Sport presentation studio in Red Square: Gary Lineker’s chair is on the right

The content includes a virtual ceiling, graphical representations of Moscow in the side LED windows and an area at the back of the studio used to display high-resolution live video feeds from match venues. The aim is to let the viewer feel that they are being taken directly from Red Square into the live stadium action with a 180° camera move.

In a major first for BBC Sport, all 29 matches transmitted on BBC1 (out of a total of 33 to which the broadcaster has rights) are being streamed live in UHD HDR over the BBC iPlayer app. The stream needs a connection to the home of at least 40Mb/s for viewers to receive the full version, and the viewer also needs a 4K TV display capable of showing HDR.

Virtual reality has moved from trial to commercial reality as FIFA is providing its VR product to several broadcasters including the BBC, Telemundo, Fox Sports and TF1. They are taking FIFA-produced VR content, developed by LiveLike, which includes video for all matches as a live 180° stream as well as a set of 360° clips. The centrepiece is a virtual VIP lounge, in an app specially commissioned for the event. 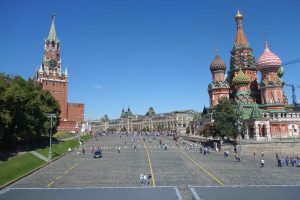 Bigwood and Technical Executive Charlie Cope sat down with SVG Europe to discuss highlights across its World Cup 2018 coverage.

“All our core live TV output is presented and produced in Moscow, but all simultaneous games, Multiplatform and Sport News is produced by teams remotely in Salford,” said Cope. “Within Moscow, all match-side production is done remotely from our core studio in Red Square, so we don’t have any local OB or SNG trucks in Russia.

“The operations are based on an Avid/EVS core infrastructure, with Signiant-based file management between sites to handle all inter-site content exchange, archive and so on. We aim to have all content archived in Salford before de-rig of our systems in Moscow at the end of the tournament,” he said.

The BBC and ITV are joint media rights licensees (MRLs) for UK coverage.

“It’s been very collaborative with ITV, and our technical teams have been working very closely,” said Cope. “As well as sharing on our satellite and DR provision, FIFA and HBS have been very supportive with us sharing some of the host resources.”

“Clearly our studios are separate,” added Phil Bigwood. “At the end of the day we’re editorially competitive so we have to respect that, but the 2018 World Cup has been our closest partnership to date. I think our two studio designs are quite different, but this is probably a good thing for the UK audience.

“Inevitably we have more programme time, because of the lack of commercials on the BBC, for more features, live inserts and additional content. Other than that, I don’t think our two production philosophies are too different in terms of how our respective programmes are put together,” said Bigwood.

Let’s talk about the studio here at Red Square. A lot of hard work from your team and suppliers like Alston Elliott, Stype, Timeline TV and Scott Fleary went into delivering the stylish 360° studio for anchor Gary Lineker and guests? 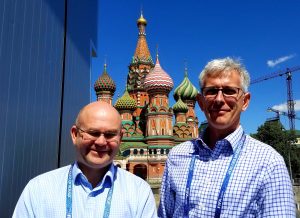 Charlie Cope: “In the studio we’ve got a five-camera rig. Even though we had a very tight rig timeline, we wanted to push out what we could do in terms of VR. We have a three-sided hard set, with a desk. Within that we’ve got virtual side windows, which are LED screens filled with a Moscow themed 3D space rendered by Viz engines. Depending which camera you cut to air, it will position the virtual images in the windows – and as the cameras moves, those images will move in terms of their perspective to match the camera position.

“Four of the five cameras have Stype Red Spy tracking, and one is a locked-off shot for guest close-up – so it never actually enters the VR world. Camera Four is the jib and Camera Five is a grid-mounted over-the-shoulder perspective camera.

“There are three elements really: the VR windows, the VR ceiling and then a VR back to the studio – and that gives us the full 360 view. This allows us to have a window into the stadium through the back of the studio by using the host 180degree UHD stadium feed, as well as a great platform for all our AR graphics.

Phil Bigwood: “We have gone it alone in the past in terms of studio location. In 2006 we had a studio in Berlin by the Brandenburg Gate, and in 2010 we had one in Cape Town overlooking Table Mountain. But as time has gone on, we’re just not in the world of doing it alone any more.

“FIFA/HBS were at the forefront of the idea to deliver a broadcast studio in Red Square, and from a BBC perspective, having FIFA/HBS manage everything for us was of huge assistance. For us to go it alone now, apart from the risk that introduces, the cost and resilience benefit of doing this as a group of ten broadcasters is enormous,” said Bigwood.

“The company that built our studio box here is the one we used for Euro 2016 at the Champs de Mar in Paris, and from our side the conversations with FIFA/HBS evolved from there.

“There’s certainly a very different look we have this time: we’ve gone with a 360° approach to the studio that gave me the best of both: look out to the iconic view of Red Square, and a tie-in to the stadiums and AR player walk-ons through the virtual window at the back.

“There’s been a big collaboration with our partners and internal design and technical teams to bring it all together. I’m really pleased with it; the feedback has been amazing,” said Bigwood.

The BBC is making a major step into the Ultra HD world here at the World Cup – and High Dynamic Range as well. How extensive is the trial service being provided through the iPlayer?

Charlie Cope: “The only basis on which the BBC is delivering UHD is if it is also HDR. Increased colour space and high dynamic range is really critical, in our minds, to look at it as a new service.

“We’ve obviously done quite a lot in UHD HDR with Blue Planet; but that’s all been around VoD. We 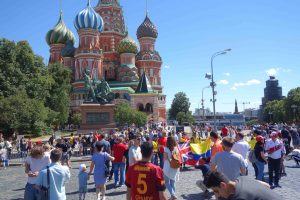 In Red Square, with St Basil’s Cathedral ahead and the temporary broadcast studio complex visible at bottom right

had not done anything in the live UHD HDR space. This was a good opportunity for us to access a decent amount of live UHD HDR content for a high profile event, where access to content is very cost-effective due to the way the host collaboration works.

“We went into discussions about UHD and ‘do we don’t we’ in the last quarter of last year, and it required a big team effort across the BBC especially from our distribution and R&D teams, to deliver UHD as a live OTT service on iPlayer.

“We did a lot of testing in the first half of this year: we did some rugby and several parts of the FA Cup to test the end-to-end proposition. Generally it has gone very well, but no question, it was a steep learning curve.

“All the matches we present live from Red Square in HD are going out UHD on iPlayer: it’s a full parallel stream to our HD programme including all our studio presentation. That’s 29 matches on BBC1 and iPlayer UHD.

“From a viewer perspective it has been a really positive reaction that we have received. It’s been great working closely with HBS as their knowledge has increased in terms of coverage and consistency across a large volume of matches”

Phil Bigwood: “We have been taking a cautious approach on UHD. In the lead-up to the World Cup there wasn’t any promotion of the service. We’ve signposted the service from mid tournament with one on-air mention per programme, and the increase in stream requests was remarkable.

“And across at Wimbledon, we’re also carrying Centre Court in UHD for the whole event. Again it’s a cautious approach but the service has been well received,” said Bigwood.

Tell us about the virtual reality service that you are providing to viewers from the World Cup.

Charlie Cope: “We have a specialty VR team back in the UK who have been working very closely with HBS on the VR offering, and with their service provider LiveLike. 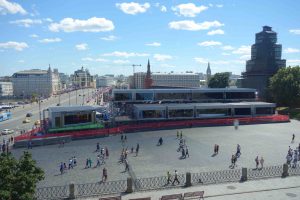 “Again that’s been quite interesting in terms of take-up; it has had a very positive reaction. It’s about evolving an understanding of what people are potentially interested in – live game experience, archive content, the data elements, social media. We’re evaluating what the audience is looking for in those propositions, to determine where it is worth us investing for the future,” said Cope.

In general how has the collaboration with FIFA and HBS been for this World Cup; what changes and innovations have come about through what they provide and how you work here, at the IBC and at venues as a result?

Phil Bigwood: “The collaboration with FIFA and HBS has been the best ever. The services are unparalleled from a host broadcaster perspective, and they are great to work with – it’s a very positive partnership.

“In terms of the core output the main feeds such as the match coverage, player cams, tactical, and team feeds have remained pretty much the same. The one big change for us in 2018 is the UHD coverage and 180° stadium feed that we use in our studio as our window out to the venues. That has been a really big plus for us this time,” he said.

“In terms of the range of content we get in from the [FIFA Max] server, that’s meant a change in 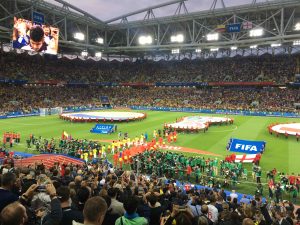 Teams come out onto the pitch for Colombia v England World Cup match at Spartak Stadium in Moscow, Tuesday July 3

philosophy for us as we now have less crews on the road. The FIFA features and content are of a very high standard and we are able to rely on this more.

“On the unilateral match facilities at venues, there are more pitch-side positions which a range of facilities which we have made more use of. There are also outside presentation positions that are used by our colleagues in News. So all in all the offer to broadcasters is ever growing, and these innovations have been very welcome,” said Bigwood.