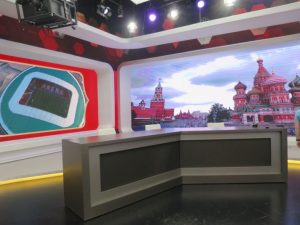 The 2018 FIFA World Cup is about to enter the quarterfinals stage of the tournament and the FIFA TV production team continues to refine its workflows not only from 2014 but also from the group stage. Like the athletes themselves, the goal is to continually build off the previous match and to continue to make the team stronger and more capable.

“The overwhelmingly positive feedback we are receiving from our media rights licensees as well as the impressive take-up of the new offerings, make us believe we had made the right technical and editorial choices,” says Florin Mitu, FIFA, head of host broadcast production. “We now look forward to the last eight matches of the tournament with a passionate commitment to continue offer off-site viewers the best possible seat in the house.”

“There is a dedicated FIFA TV crew for each of the 32 teams at the World Cup.”

The IBC itself is located in the Crocus Expo International Exhibition Center northwest of Red Square which is another primary location given the presence of rights holder studios. The IBC is once again a massive place, with 54,000 sq. meters of raw indoor space, 8,613 sq. meters of multilateral areas, and 9,054 sq. meters for the unilateral production teams. The production centre measures 3,329 sq. meters and houses seven studios, the largest of which is the Televisa studio (pictured, above) which measures 300 square meters. The seven studios are for Fox U.S., Fox Brazil, Telemundo, Televisa, Caracol TV, TYC Sports Argentina, and CCTV.

The production team in Moscow at the IBC is complemented by 40 ENG crews (comprising 120 people) covering each team and gathering footage from practices, interviews, location beauty shots, and more (details below). And, of course, there are the Host Broadcast Services (HBS) technical and production teams at each of the 12 venues, a number of which are no longer active as matches will no longer be played there.

Once again, they will operate out of Equipment Room Containers instead of traditional remote-production trucks. The advantages of the ERCs are clear: they provide more room for the production team and obviate numerous onsite trucks.

The core production plan for FIFA World Cup match coverage calls for 37 cameras to be used for each match, with the addition of two behind goals pole-cams for the knock-out rounds. New this year at the IBC is the first use of Video Assistant Referees, centrally located at the IBC in Moscow. The VAR team has access to all relevant host-broadcast cameras plus two dedicated offside cameras and supports the match officials during all 64 matches.

Also new at the IBC are two Infotainment galleries, removing the need to have dedicated in-venue video board operations at each stadium. The teams in the galleries have access to all feeds and dedicated ISO feeds (including to RF handhelds) and low-latency transmission to the giant screens in the venues ensure fans in the stands get a robust and timely experience. One challenge? Communication and coordination between the people on the ground and the gallery.

The UHD/HDR efforts at the FIFA World Cup have two layers of production formats in use: a core layer comprised of cameras operating in 1080p 50 fps SDR mode (REC.709) with HD graphics and then an enhanced UHD layer which is 2160p 50 fps HDR (BT2020) without graphics. The HDR production format is OETF Slog3/Live while the UHD feed (available only at the International Broadcast Center) relies on quad 1080p/50 at 3Gbps to create the 4K resolution image.

The UHD/HDR output will take advantage of a dedicated camera at the camera one position as well as seven additional UHD camera positions. The remaining 11 single-speed 1080p/HDR cameras will all be upconverted to UHD’s 2160p resolution (with HDR).

The key to all of the production efforts is a dual-layer workflow allowing a single vision mixer and single production team to create three deliverables to rights holders: 1080i SDR; 1080p SDR; and UHD HDR. The vision mixer is outputting two of those three signals directly to rights holders: a 1080i/SDR version; 1080p SDR version.  The UHD version will simultaneously be created within that same vision mixer, relying on upscaling and colour mapping to create a UHD 2160p HDR BT2020 signal. That UHD signal is sent back to the IBC via fibre and then processed and made available to rights holders as UHD with HDR in three flavours: S-Log3; HDR10; and HLG. A “dirty” feed of each of those three formats includes English graphics while a “dirty dirty” feed also includes clock and score. 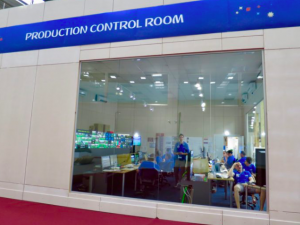 One of the big challenges for any single production that is designed for both SDR and HDR output is figuring out the best method to shade the cameras. For example, shading in HDR can potentially cause issues with the SDR output as the shader may not be aware of how the expanded imaging capabilities for HDR might exceed the capabilities of the SDR output and cause issues like blowing out light areas or dark areas that lack detail. As a result, the FIFA World Cup production team is shading in 1080p/SDR.

The FIFA World Cup coverage may seem straightforward, but the FIFA TV production team is providing a wealth of feeds around each match, including a dedicated production at each stadium on the days prior to matches. One gallery at the venue is used for the production of all the multi-feeds. One goal this year is to provide faster access to team content, more warm up and fan coverage, and to make use of a cine-style camera at each match to lend more visual quality to packages.

The core feed is the Extended Stadium Feed (ESF, also available in UHD) and its clean version (CSF). Those two feeds are available beginning 70 minutes prior to kick off and end 10 minutes after the match. A third feed is the EBIF Show which is the same as the ESF as of kickoff but before the match offers bespoke content to rights holders.

And with media rights licensees hungry for highlights, a Permanent Highlights feed begins 10 minutes prior to kick off and then is continually updated with new highlights during the match before ending 30 minutes after the end of the match.

Two interesting feeds are the Team A and B feeds and the PlayerCam A and B feeds which each pass two channels down one feed with each channel dedicated to one of the two teams competing. Those channels include team arrivals, wwarm-ups shots of fans for each team prior to the match and then, during the match, coverage of players and coaches on the bench. After the match, it offers up flash interviews and then mixed zone interviews and press conferences. The PlayerCam feed has warmups and then shots of players during the match followed by post-match interviews.

Other feeds include the Tactical and Additional Content Feed (coach arrival interviews, dressing rooms, and then during the match the tactical camera feed); Clips Compilation Channel: Action (continuous sequences of match-relevant action clips); and Clips Compilation Channel: Emotion (relying heavily on ultra-motion footage of fans, player reactions, and more). The Clip Compilation Channels are actually produced by two teams working at the stadia and are also delivered as files or as SDI playout for linear needs. The goal is to make those clips available as close to live as possible.

And as if that is not enough, FIFA makes 10 isolated camera feeds available, including key cameras like camera one, the cameras on the 16m line, a high-behind goal “tactical” camera, the cable cam, and the UHD/HDR tactical camera. ­­ 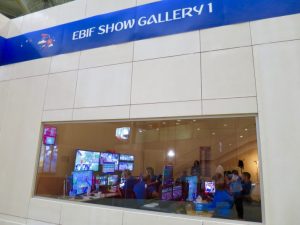 With so many rights holders interested in what is going on with every team the FIFA TV team has tackled the issue of how to keep everyone happy without having dozens of crews following a single team by having dedicated FIFA TV crews for each of the 32 teams. Those teams speak the native language and cover everything from daily training to press conferences and even exclusive interviews. Social media coverage and even 360-degree videos are also part of a plan that offers up roughly 300 hours of raw content to rights holders on a daily basis. And their work actually began well ahead of the actual tournament as they covered team arrivals, filmed each team for chroma key needs. The chroma key filming was done for all 32 teams and match officials with each person doing one move and player’s filmed doing individual celebrations.

In addition, there are eight production teams that are creating approximately 50 hours of content that includes feature stories and coverage of fans and FIFA World Cup celebrations.

Selected FIFA TV crews have also relied on eight LiveU units to cover arrivals, breaking news, pre-match training (if away from the stadium), press conferences, and Fan Fests. And now that the tournament is heading into the quarter-finals those eight units will be used to cover the final eight teams and deliver 1080p/50 signals to the IBC using the LiveU store-and-forward function at 15 Mbps.

Making it all available

One of the key service offerings from FIFA is the FIFA MAX Server, with its revolutionarily designed FIFA Content Interface. The goal was to provide media rights licensees easy on-site and off-site access to a server with all of the content that has been created. Pre-defined content categories make it easy for users to find what they need, and filters can even be tied to alerts and email notifications so that if clips for a specific player or team are available the user can find out immediately. In addition, a support team offers daily contact to rights holders to let them know about the best content.

With the 2018 World Cup heading into its final week attention will focus on the 2019 FIFA Women’s World Cup in Paris and even the 2022 FIFA Men’s World Cup in Qatar. Refinements, enhancements, and new features are surely in the offing as FIFA’s production team looks to continue to enhance the storytelling and presentation of one of the world’s top sports.