One of the centrepieces for Fox Sports coverage of the 2018 FIFA World Cup is the network’s studio at Red Square, a facility that was a long-time coming and has undergone some revisions since the early days of planning.

And as the tournament heads into its final seven matches it is pretty clear that the studio, with its backdrop of the Kremlin and St. Basil’s Cathedral, has given the network and its studio production team and talent just what they need.

“We wanted to be in the centre of Red Square and HBS was able to secure this location which is the signature spot and stamp of Russia itself,” says Rod Conti, Fox Sports, VP, World Cup Operations. “And we worked to get as individual of a look as we can within our walls, running two shows a day and then working with other affiliates like Fox Sports Brazil, Sky Deutschland, and others.”

The overall footprint may be smaller than what Fox Sports is typically used to at a major event like the Super Bowl where they have much more freedom to define their presence. But the World Cup, like the Olympics, requires coordination with the host broadcast operations and also other rights holders. As a result, the Fox studio is located next to a two-story studio complex where other rights holders like the BBC, ITV, Telemundo, SBS, TV Azteca, and others also had a presence.

“HBS does a really good job of handling requests and mandating protocols that keep things in line,” Conti says of sharing the space. “We thought it would limiting but it has turned out to be essential in this environment. And everyone on the engineering side of the networks here are sharing, getting creative, and working with each other.”

The studio measures 27×35 feet and offers up a number of different looks thanks to the backdrop of Red Square behind the set, a small patio, and a large Sony Crystal LED Integrated Structure (CLEDIS) display which offers 180-degree viewing angles so that even the fans outside of the studio can watch matches being played on the screen for the talent. 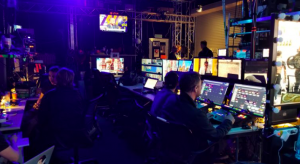 An expanded back of house space at the Fox Sports Red Square studio gives the production team a place to be close to the set and talent.

“The screen gives us something to shoot against and the AR and tables play against the screen so the payoff has been nice as the matches look great in it,” adds Conti.

The original plan was for a two-floor studio facility but that eventually was cut back to one floor with an expanded back-of-house area, so the on-site production team could be close to the talent and studio. Audio operators, camera shaders, and those involved with the robotic controls and augmented reality elements are all on site.

“The robotics have Sony HDC-4300 cameras on them and we went with robotics because space was more of a concern than anything,” he says.

Kevin Callahan, Fox Sports, VP, World Cup Operations, says that Canon has also played a role in the studio operations as their on-site support group has been busy ensuring the lenses operate to the best of their ability.

“Their support has been fantastic as they make sure all of the lenses are in tip-top shape,” he adds. “Also, all of our ENG lenses are Canon 4K lenses operating with Sony F55 cameras.”

The Fox Sports team at the studio is comprised of 175 people who work in two shifts. The studio is a beehive of activity from around noon to 3:30 or 4 a.m. during match days and the team on site is complemented by a team at the IBC that produces FIFA World Cup Today and a team in Los Angeles that produces FIFA World Cup Tonight. By having the show cut remotely there is not a need for a production control room to be onsite at Red Square.

“The Zoom teleconferencing system is connecting us to everywhere so that the talent can have their daily meetings with production,” says Conti.

Bruno Brunelle, Fox Sports, lead engineer-in-charge for the studio operations, says that two 10 Gbps circuits are used to send nine camera signals and audio signals to the IBC with the help of Six Lawo V remotes. There are also 65 feeds coming back to the studios.

One change since the early days of the tournament was the decision to pull out the glass wall that was originally located behind the main desk. Glass walls help with things like sound, rain, wind, or high temperatures but the decision was eventually made to remove it and get more connected with the audience and outside.

“What it gains us is the ability to bring the outside in,” says Conti. “Losing the glass poses some risks but the benefits outweigh them.” 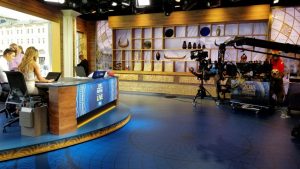 The studio was designed by JHD Group, led by Jeff Hall, working closely with Gary Hartley, Fox Sports, EVP, graphics. Conti says that, like in Vancouver, one of the goals was to create a look and feel to the studio that not only reflected the Fox Sports brand but also the nation hosting the event.

Handmade and commissioned elements like hand-blown glass pieces that reflect different aspects of Russian culture line the walls of the studio. And 22-carat gold leaf has also been put to use by the builder of the set, VBT based in Stuttgart, Germany. The World Cup is the first time Fox Sports has worked with VBT who also builds structures for HBS.

“They took Gary’s vision and turned it into reality and they did it with a fresh attitude,” says Conti. “And nothing can shine quite like gold when the light hits it.”

AR is another big element in the studio as Stype’s Red Spy camera tracking system which can begin tracking within 20 seconds of being turned on and requires no calibration. It emits infrared light which is reflected back to the system by reflective markers installed around the studio. A VizRT graphics system inserts the AR elements.

“It’s worked out really nicely and we’re happy with it,” adds Conti.

Conti says he believes AR will continue to play a larger role in studio operations as it can help a smaller studio look bigger, especially when tied to a green screen element.

But for all of the benefits AR brings nothing can outdo being on site and in the open air. “It feels more live and has a presence, so we are doing as much as we can to bring the outside in,” says Conti.

And next year Conti and the team will be doing to replicate the same feel and dynamic energy for another big event on the FIFA schedule: the 2019 FIFA Women’s World Cup, to be held in France.