Live video and data networks, conceptualised and operated by the VIDI team in Russia, are being watched worldwide during the 2018 tournament.

To ensure that it all works, VIDI installed and tested the adaption technology in advance at all 12 match venues as well as in the International Broadcast Centre (IBC) in Moscow. 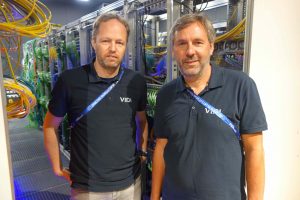 At the IBC VIDI Owner and Technical Director Karsten Winterburg told SVG Europe, “We deliver all the live material from the venues back to the IBC. And at the 13th venue, the outside presentation studios at Red Square, we also transmit all the video and data feeds between that location and the IBC, back and forth.

VIDI Director Event Service Robert Oszvald added, “We have three flight cases at each venue for video and data. We provide 140 video ports to each venue: this could be from HD 1080i up to 8K, for customers like NHK for their 8K transmissions.

“We are contracted to a Russian company called Synterra Media; they have the State contract from the Russian government. We are, let’s say, indirectly serving HBS: in 2014 we had a direct contract with HBS but this time all parts which have to be provided by the government are with a Russian company,” he said.

“Our team has a telco and broadcast background,” explained Winterburg, “and we understand where the problems are going to come from in live broadcasting. Normally telco guys don’t understand live video as they’re usually transmitting data. It doesn’t matter to them what is in the data.

“The protocol for all of this is IP, and we did our first IP transmission for video back in 2006. For us it’s a common interface, common protocol and common procedure,” he said.

After more than two years of intensive planning and preparation, the VIDI advance party made its way to Moscow in early May to begin the construction and operation of the contribution network for live broadcasts. Engineers reported the enormous network ‘ready for service’ two weeks later.

And since June 14, the live broadcasts of the World Cup matches have been transmitted via this system. In addition to the transport of live video signals, the network also provides significant data options and services.

The carrier connections have been realised via the network of the Russian telco MegaFon. The local cooperation and contract partner for the entire project is CSJC Synterra Media.

The installation and set-up of the network was a mammoth task. A complex network topology with the provision of double signal paths was set up as a fail-safe. In the event of problems, it is possible to switch to the backup channels using hitless switching technology without interrupting the viewers.

Transmitting from venues to the IBC

Audio and video data of the cameras is received, processed and forwarded to the IBC, located in the Crocus Expo International Exhibition Centre in Moscow. Every goal, every pass and every save goes through the IBC.

Moreover, extensive file services are also realised via these connections. This is a challenging task for 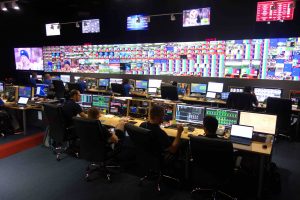 Inside the giant Master Control Room at the IBC

the VIDI engineers, who are tasked with handling the signal transmissions sent from the individual stadiums to the IBC and forwarding them around the globe to the many rights holders.

The network is integrated via 104 redundant 10G connections. All video signals are compressed with hitless protection and as JPEG2000. The 10G data services are also hitless protected.

Furthermore, the VIDI team also supports additional contribution and service paths to the IBC. For example, to Red Square in Moscow, which is home to several outside presentation studios. This integration for video and data applications has been realised as 9x 10G connection. And the path is run redundantly which means that a total of 18x 10G are available. To this end, the broadcasters are provided with protected 10G and 1G services.

The connection to the IBC in Moscow is established via six redundant 10G network lines. All services were thoroughly tested beforehand. For example, complex power-down scenarios, during which the power for the adaption technology had to be supplied from an internal UPS system for at least 15 minutes, had to be mastered. 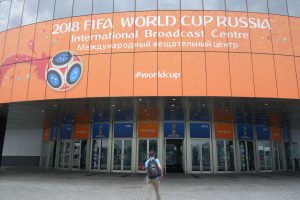 As always, quality and security of the solution was the focus in this network design. That’s why the Network Management System (NMS) from VIDI also serves as the central tool in Russia for monitoring all signal connections and ensuring transmission quality.