YouTube is closing in on its 10th anniversary and Stephen Nuttall, YouTube, EMEA, senior director, took to the stage at Content Everywhere MENA to discuss how YouTube is giving everyone a chance to create their own YouTube channel and create an audience. The key, he says, is that YouTube is not about viewers but fans. 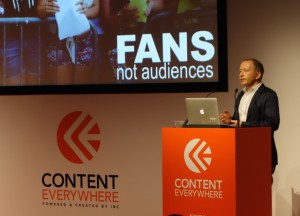 Stephen Nuttall, YouTube, EMEA, senior director, says that YouTube’s success is not due to viewers but fans.

“YouTube was built by fans,” he says. “Fans who pay tribute to their favorite shows. Our platforms can help you use the power of the Web to give audiences what they want, where they want, and to build two-way relationships with viewers that turns them into active fans.”

Diana Baddar, YouTube, head of MENA Partnerships, laid out the strength YouTube has in the MENA market. More than 14 million hours of content is consumed on YouTube every day in the MENA region and it is second only to the U.S. in terms of average viewing times per viewer.

Ahmed Abbas, COO of QSoft, took to the stage to discuss arguably the most important MENA development to arise out of YouTube: the phenomenon of “Al Bernameg,” the Egyptian political satire show that was created by QSoft and featured anchor Bassem Youssef.

“When the show started in 2011 the Egyptian revolution was happening and for us this was an opportunity to tell the truth and we knew that Egyptians understand humour and sarcasm.”

The company was also one of YouTube’s first partners in the MENA region and with a nice format, a charismatic personality, and good production values the pieces were in place to create a phenomenon. But there was another important element.

“We new how to make a YouTube video go viral,” says Abbas. “On YouTube there is not much time to hook a viewer as they will decide whether to watch in the first few seconds. Also fans want to be part of it and share the video and comment on it. And once they subscribe you can build a fan base.”

Abbas advises those looking to best leverage YouTube to take a few key steps. First, schedule videos to be release a couple of times a week so that viewers can wait for content. Also link videos to each other to help drive overall traffic. And lastly, relate to current events, whether a concert, sports event or, in the case of “Al Bernameg,” a revolution.

When the show made the leap to broadcast TV the YouTube outlet still proved important. Videos, for example, would be released online at the same time as they were on TV. But fans online were given exclusive backstage footage and more.

“Al Bernameg” may be no more but Qsoft is not done as it has launched the TubeStar Network that is designed to help talent in the MENA region go from “zero to hero.

“Talent in MENA is underserved and limited to music TV contests,” says Abbas. “And old faces still dominate TV talent. So we think we can add a lot of value to help talent reach the next step.”

The company has had 4,000 video submissions that have been viewed 120 million times.

“We have nine new shows in development,” he says.

Qsoft is not alone in using YouTube to transform a region that, historically, has seen limited opportunities for those not well entrenched in the traditional media business to find a voice.

“We started in 2011 as we saw a gap in content from Saudi youth to Saudi youth,” he says. “We started with a couple of shows and asked ourselves what do people want.”

The first show the company launched was a satirical show featuring a standup comedian. Not knowing where the boundaries the company focused on national news headlines.

“We took the news and create funny comments on it,” he says. Today the show enters its fourth season and has more than 855,000 subscribers. Total users today for QTurn’s 50-plus shows exceed 24 million on social media and also 10 million YouTube followers.

What’s most important, he says, is reaching what he calls Generation C.

“They live like us but they are totally different and about being connected, community, curate, and create,” adds Al-Khatib.

For Baddar both Qsoft and UTURN represent what YouTube partnerships are truly about: “This is a platform to create, inspire, and share,” she says.

With Bassem Youssef landing on the cover of Time magazine as part of the 2013 “100 Most Influential People in the World” issue one can’t help but agree.