Integrated Systems Europe is under way in Amsterdam and, as has become tradition at the increasingly popular A/V show, Panasonic got things started Tuesday morning with a press conference chock-full of new-product announcements. For the sports-venue market, the company launched a companion to its best-selling PT-DZ21K projector: the PT-RZ21K projector series. 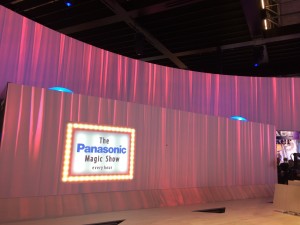 The PT-DZ21K projector shone last summer at the 2016 Rio Olympics, when 100 20,000-lumen projectors were deployed to Maracanã Stadium to bring the Opening Ceremony to life, and has become Panasonic’s best-selling high-brightness projector in Europe since it hit the market in 2012. The PT-RZ31K projector also was deployed at key moments during the Opening Ceremony, providing 30,000 lumens of output, and has found success with Bayern Munich, providing on-pitch projection at Allianz Arena in Germany.

Geared to the rental, events, and large-venue market, the compact 3-chip PT-RZ21K DLP Solid Shine laser projector series is intended for applications where space is at a premium. The RZ21K generates up to 20,000 lumens of brightness at WUXGA or SXGA+ resolution using dual solid-state laser drives.

On a smaller scale, Panasonic previewed its new SF2 series of Full HD E-LED display panels, available in four sizes and featuring wide-view IPS panel technology, with 450-cd/m2 brightness. The company also introduced two 10-point touch panel displays, which are intended to be used as digital whiteboards and are aimed at the business and education sector. 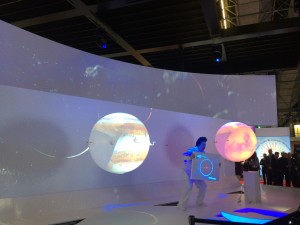 Of course, it wouldn’t be a Panasonic booth at ISE without an eye-catching display to anchor it. The company partnered with four companies to bring this year’s event “showstopper” to life. Painting With Light created a show and content that is projected onto moving AirOrbs, helium-filled spheres, provided by Airstage. d3 Technologies is providing the content playback, real-time mapping, and complete integration of all the partnering technologies, and Blacktrax is providing the tracking system that allows accurate projection onto the moving objects. The showstopper, called “The Panasonic Magic Show” will run every hour throughout the show, showing off the company’s projectors within an event.

ISE 2017 also represents the official launch of LinkRay, which was introduced as a concept at last year’s show. The 1-2-1 marketing solution uses individual codes within LED light sources as a way to deliver digital data to users’ mobile devices.