After dipping a toe in the A/V market at last year’s InfoComm Show in Las Vegas, Pliant Technologies jumped in at this year’s ISE in Amsterdam. The first-time exhibitor demonstrated how its CrewCom professional wireless intercom aligns with the communication needs of sports-venue personnel.

CrewCom, the first product launched by Pliant Technologies (the professional division of CoachComm), is based on a new technology platform that represents a departure from the traditional partyline or matrix intercom. CrewCom is based on the company’s proprietary CrewNet network, which coordinates and transports all system timing, audio, signaling, and controls.

“Wireless intercom has been a category product for a very long time, but people often forget those are two different words: wireless and intercom. And, for virtually every other product on the market, it’s really accessory to a wired product,” says Pliant Technologies Global Sales Manager Gary Rosen. “Rather than relying on a partyline two-wire telecom, rather than rely on a matrix router, we built a new kind of system called conference, which is simply an audio stream that we assign things to.” 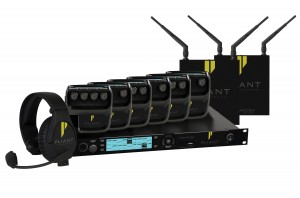 Based on the CrewNet network, CrewCom relies on a single control unit and a single or multiple transceivers to connect as many users and as many locations as needed.

Instead of relying on a base station, CrewCom relies on a single control unit and a single or multiple transceivers to connect as many users and as many locations as needed. Users can operate CrewCom in normal mode, which allows six users per transceiver, or opt for high-density mode, which ups the number of possible users to 32. CrewCom gives venues the flexibility to determine which users need to speak in which locations and deploy and configure transceivers and individual wireless radio packs accordingly.

“It’s the kind of system that lets you build out who’s talking to who, how they’re talking, where they’re talking, and can get you very reliable coverage,” Rosen explains. “If I had six people in my entire system, I could put 32 transceivers on the network, which means I could have six people in 32 locations. Or 12 people to 16 locations. Now we have the ability to allocate by venue who needs what coverage.”

CrewCom wireless products are available in 2.4 GHz and 900 MHz (the latter limited to where this band is legal), and any combination of these frequency ranges may be used simultaneously on the same system. As a result, CrewCom can work within the various frequency constraints of North America, Europe, and beyond and provide dependable RF coverage anywhere in the globe without the need for additional technology.

Designed to handle a wide range of applications, from simple out-of-the-box solutions to large-scale venues, CrewCom is intended to be a versatile communications solution that could find a home in sports venues, broadcast networks, industrial environments, and anywhere a group of people need to communicate clearly and efficiently.

And, while CoachComm continues to have a strong presence in sports venues as a communication device for coaches on the field, Pliant Technologies’ CrewCom also is finding a niche in sports venues among officials, production and infrastructure personnel, and stadium workers.

“Within the stadiums and facilities, it’s not [just] coaches talking to coaches, and that’s where we come in,” says Rosen. “You’ll go into a stadium, and they’ll be using our CoachComm product on the field, but the halftime show will be our technology.”